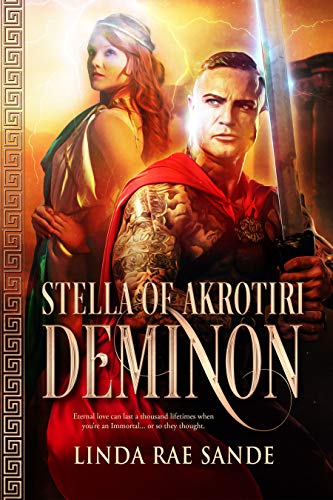 Stella of Akrotiri: Deminon: An Ancient Greek Tale of Immortals

Love can last a thousand lifetimes when you're an Immortal... or so they thought.

What's become of the Immortal Darius? When his wife, Stella, learns he's been the victim of treachery, she worries about his fate as she rules over their city-state of Deminon. She'll do anything to get him back.

Enslaved as a traitor to Rome, Darius is forced to fight gladiators as part of the funeral rites of powerful Romans. His years of experience on the battlefield serve him well in the arena—until he's forced to fight Marcus—a younger, stronger gladiator who is unaware of his own immortality.

Sure he's about to suffer a defeat by the hand of Marcus, Darius is forced to make a decision that will change his future and Stella's—preserve his essence by allowing his body to die so that he can live on in Marcus. His two-thousand years of memories and life experiences should be powerful enough to overcome the essence of the untested Immortal. Allow him to return to Stella and resume their life together, even if she won't immediately recognize him.

But Marcus isn't giving up so easily. Especially when he meets Stella.

Will Marcus help Darius take revenge on the one whose deceit led to his arrest on charges of treason? Or will Darius' essence slowly be subsumed, the memories of his nearly two-thousand-year lifespan—and of Stella—fading away in the mind of Marcus?

These Immortals once had all the time in the world. Now time is suddenly of the essence.