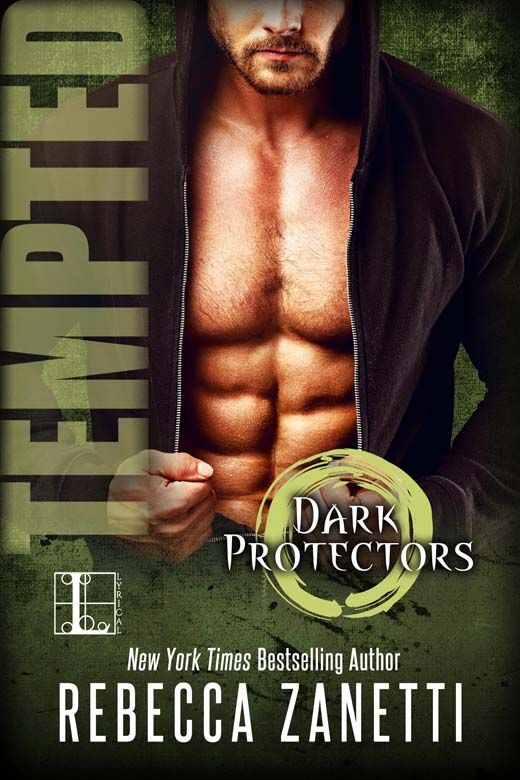 CONSTANT DANGEROn the run from a mental institution and her vindictive half-brother, it's safe to say that Sarah Pringle's happy life as a school teacher is on hold. Too bad that as far as self-defense goes, "run and hide" is the best she's got. And with the monsters that started her escape hot on her heels, that's not going to cut it for long...INSTANT LUSTThat is, unless Sarah has a bigger, badder, hotter monster on her side. Max Petrovsky is right at the top of the list of alpha male ass-kickers. And he knows exactly what Sarah's up against. Good thing, because the minute he sees her something primal kicks in, turning everyday attraction into red-hot desire. As long as they're cooperating, why not mix some pleasure with business? Of course, Max should probably tell Sarah he's a vampire himself...

Please log in to recommend or discuss...
Rebecca Zanetti

Damn it all to hell. The last place Max needed to be was outside the crappy motel trying to get a glimpse of the woman inside room thirteen. He shrugged his shoulders against the rain splattering his leather jacket. Switching from babysitting back to war and possible violence failed to provide the rush he’d expected. But he’d follow orders.

As a hunter, he was a Russian bloodhound—and Dage needed a bloodhound for this one.

The curtain slid to the side.

Max settled his stance in the center of the deserted parking lot. The woman had parked her stolen truck around the corner, a tactical move of which he approved.

A pale face peered out the window. Even across the torn concrete, he could see her eyes widen. Yeah. It wasn’t like he was trying to hide. He held his hands up, palms out. Empty and harmless.

Well, it was worth a try. He hadn’t wanted to scare her by knocking on her door. The hunting part of his job normally ended with cutting someone’s head off—usually as a way to end evil. But this time, he was hunting and gathering. Any finesse needed for the second part of his plan didn’t exist inside his hulking frame. He glanced down at his huge boots and rain-soaked dark jeans. No wonder the woman had cowered away from the window.

Biting back a sigh, he stalked over uneven concrete and deep puddles. Maneuvering around to the rear of the paint-chipped building, he found his prey.

Two long legs led up to a heart-shaped ass trying to wiggle out a window. He let her drop to the ground, waiting until she turned around.

“Please don’t run.” His boots were made for kicking down doors, not running.

She yelped, pressing back against the worn shingles, hand to her chest.

It was the worst self-defense move he’d ever seen. “I’m not going to hurt you.”

Eyes the color of deep chocolate widened. Dark circles marred the smooth skin over her delicate features. Running had taken a toll. Sandy-blond hair framed her classic face. She stood much taller than Cara and Emma, the new mates of his friends and the only human females he’d been near in over a century.

This woman, the one he hunted, she stood tall with legs long enough to give him pause. Yet, even at about five foot eleven, she was several inches shorter than him.

Something sizzled along his spine. His body reacted to the gentle vibrations cascading off the woman. Instinct honed his focus on her. Special. He should’ve known by his obsession with her picture. The woman was a potential vampire mate. Enhanced. Maybe an empath?

He waited as she settled her stance. Then went for a knee shot.

It was the worse side kick he’d ever seen. Her worn tennis shoe bounced off his knee, causing no more hurt than a breeze. She stumbled, and he reached out to steady her. His hand easily wrapped around her bicep. “Where the hell did you learn to fight?”

“The internet,” she gasped, trying to jerk away.

That explained it. “The knee shot was a good move. You just didn’t aim the kick right.” He was a big guy. If she dropped him, she’d be able to run.

“Should I try again?” Fire lit her eyes while a small smile flirted with her pink lips.

The humor caught him off guard. He matched her smile. “You’ll just hurt your foot.”

Rain splattered against her plain white T-shirt, outlining perky breasts. Awareness slid down his spine. Now was not the time. He needed to focus. Tightening his hold, he began to ease around the building. She dug in her feet, pulling back, but he continued on the way. Forget about those curves. He had a job to do and needed to be home to protect Janie by the end of the week. “Stop fighting me, Miss Pringle.”

She stumbled again. “You know my name.”

They reached the door to her room and he tried the doorknob. Locked. “I know everything about you.” He’d read Sarah Pringle’s file several times, intrigued by the former teacher’s kind eyes. The dossier had failed to describe her killer body. “My name is Max. Where’s your key?”

She glanced around the deserted area, eyeing the forest to the south. “I left it inside.”

He pivoted, smashing his shoulder into the wood. The door splintered, swinging inward. The stench of moldy carpet assaulted him as he tugged her inside. What a dive. “Get your stuff. You have two minutes.” Then he stilled. Blood. The spicy scent filled his nostrils, overcoming the stench. “Did you hurt yourself going through the window?” He grabbed her by the shoulders to take inventory. Red welled from a cut in her upper arm.

Something warmed in his belly. Even worn down, the woman was beautiful. Her blood smelled like sex and sunshine. “You have a scrape.” Two steps had them at the bathroom, where he grabbed a threadbare towel to gently wipe off the blood. “There, now. No big deal.” He softened his voice as he’d learned to do when Janie had a small injury. Not that he let her get injured often.

Sarah cleared her throat. “Are you working for the monsters?”

“No.” Damn. He should’ve told her that already. “I’m not working with the Kurjans.”

Her skin was too soft. How the heck had she evaded them for so long? “You know about them?” Her breath caught, and she seemed to hold it. “They’re called Kurjans?”

“Yes. I’ll explain about them when you’re safe.”

She shook her head. “I’m not going back to the institution.”

“No, you’re not.” Max tried to put on his most reassuring expression. From the wary glint in her eye, he’d failed. “You’re safe, Sarah. I promise.”

A pretty blush wandered across her face. “Um. Why do you have blue nail polish on your pinky?”

The rain was increasing outside and battering through the destroyed door. Too much cloud cover for his peace of mind. He glanced at his watch. “We need to go.”

“No. If you’re not with them, you’re with the institution. I’m not going anywhere.” Determination had her chin lifting. She edged away from him, sidling around the ripped bedspread.

“I found you. They’ll find you.” The woman might suck at fighting, but she’d done a good job covering her tracks. He’d needed an entire week to hunt her down. The Kurjans couldn’t be far behind.

The empty beer bottle she grabbed from the bed table snapped the slow temper he’d shoved down. Although he appreciated a woman who liked a beer, he didn’t have time for this crap. His nape itched—they had to go. “Ah, sweetheart. You want to stop playing with me now.”

“Playing?” Her lips tightened into a white line. “You’ve misread me, bounty hunter.”

Even pissed, he couldn’t help the grin. “You think I’m a bounty hunter sent by a loony bin?” It probably was rude to refer to the mental institution as a loony bin.

“Why else would you be here?” She wrinkled her forehead, backing toward the door, the harmless bottle stretched toward him.

“What’s your plan here, brown eyes?” He cocked his head to the side.