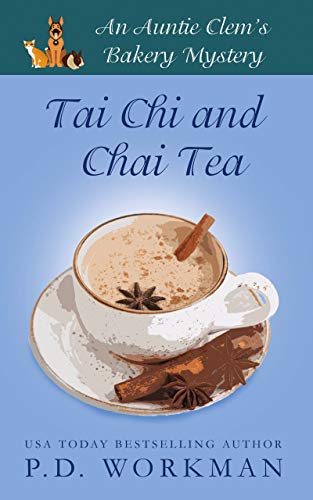 From USA Today Bestselling Author, P.D. Workman!
It is Thanksgiving in Bald Eagle Falls and the smells of spicy new offerings waft from Auntie Clem's Bakery.

Mary Lou is delighted to have Campbell home for Thanksgiving dinner, but less than thrilled with his companion. Before they can get to the bakery-fresh desserts, they are joined by an uninvited guest, the kind that comes with a warrant.

You would think things couldn't get much worse, but the appearance of a dead body raises the stakes even more.

Erin needs to do some pretty fancy contortions if she is going to figure out how to get Campbell out of this one.

⭐️⭐️⭐️⭐️⭐️ It just wouldn't be Thanksgiving in Bald Eagle Falls without a drug bust and murder! This time Erin almost bites off more gluten-free bread than she can chew. As expected, this cozy mystery is well-written, has a great plot and a well-developed cast of characters.

Like baking mysteries? Cats, dogs, and other pets? Award-winning and USA Today Bestselling Author P.D. Workman brings readers back to small town Bald Eagle Falls for another culinary cozy mystery to be solved by gluten-free baker Erin Price and her friends.


Have your gluten-free cake and eat it too. Sink your teeth into this sweet treat now!

THIS TIME, IT WAS Terry who woke Erin up, rather than the other way around. He was gasping hard like he was running or maybe even having a heart attack. She reached for him beside her and found his body rigid as he fought for breath.

“Terry. Terry!” She shook him, trying to rouse him, her mind jumping to all kinds of possibilities. Maybe he was having a heart attack. Maybe he had suffered some sort of damage in Theresa’s attack on him that the doctors hadn’t discovered. He had thrown a clot, and it had gone into his lungs or heart. Or something had happened in his brain and it was a seizure.

He’d been hit on the head as well as choked out, and either one could have caused neurological damage. Maybe damage that the doctors hadn’t seen or predicted. They had warned that his road to recovery might not be smooth.

He gasped one last time and sat bolt upright in bed, shoving her away. Erin was hurt even though she knew that he wasn’t conscious of what he had done. He was always gentle with her, and being pushed away like that sent her sense of danger into hyperdrive. She was sure, as ridiculous as it was, that she was going to be attacked.

Terry looked around. There was just enough light in the room to see his shape, not the expression on his face.

It took a minute before he reacted, still looking around him as if there might be some danger lurking. He drew in a long breath and let it out slowly.

“Yes. Come on.” She wrapped her arms around him and molded her body against his. She could still feel his rapidly-beating heart as well as her own. “Do you want to talk about it?”

She needed to get up early, so both of them were usually careful to avoid conversation late at night, but she wanted him to know that if he needed a listening ear, she was right there. If it would help him to calm down, then it would help both of them get back to sleep sooner.

“No.” He let out a few more quick puffs of breath. “I don’t even remember what it was. Not really. I wasn’t dreaming something was happening. Just… a feeling.”

“Mmm-hm.” She cuddled close against him. She’d had plenty of night terrors herself. There wasn’t always any narrative to go with the feeling, just that crushing anxiety, that sense of danger. “Do you need anything? A drink? A back rub?”

She knew that he worried about her getting enough to sleep with her early-morning baker’s hours. His first instinct would be to protect her rather than to deal with his own needs. She rubbed his shoulders in spite of his answer.

“Are you sure? I can get you something. Milk or tea…?”

“Okay.” She was still again, cuddled up against him, eyes closed, soaking in the warmth of his body and his musky smell. Despite being woken out of a sound sleep, she felt safe and comfortable with him there, the two of them intertwined. It helped to soothe her own nighttime fears.

“Should I get up and check the burglar alarm?” Terry asked, rousing Erin. “Are you sure that it’s armed?”

Usually, he didn’t worry about the burglar alarm when he stayed over with her. He was more concerned if she was by herself. If he, an experienced police officer, was there, he didn’t think anyone would be stupid enough to break in.

But his squad car wasn’t parked in front of the house anymore. Since he had been taken off of active duty, it had been parked in the police department’s parking lot. And since Stayner had been contracted to cover Terry’s duties, he was the one who had been driving it. He wasn’t a full-time hire, so he didn’t get to drive it home at the end of his shift as Terry had, but Erin knew that Terry still didn’t like the idea of someone else driving ‘his’ car when he wasn’t there.

“I set the alarm,” she assured him. “You don’t need to check. Besides, if there were a burglar, Orange Blossom would be letting us know. And probably K9 too.”

Hearing his name, Orange Blossom gave a soft meow and jumped up on the bed next to Erin. He sniffed her ear, investigating why she wanted him. Erin giggled. K9 was in his crate, but she was sure he would be making noise if he had heard or sensed an intruder in the house. And Orange Blossom, her little attack cat, was very territorial and had raised the alarm in the past when someone had managed to bypass her burglar alarm.

“Blossom, lay down,” Erin ordered. She turned away from Terry to deal with him. She scratched his ears and kissed him on top of the head, then pushed him down to lie beside her. It took a few times before he was content to curl up against her, purring loudly in contentment.

“Do you think you could get him to turn the engine down a bit?” Terry asked dryly, putting his arms around Erin from behind her and holding her close again, so that she was sandwiched between the two of them, cozy and warm.

“It doesn’t work. The more you ask him to be quiet, the louder he gets.”

Terry knew how loud Orange Blossom could be, so he accepted this. They both just lay there, listening to his rumbling purr. It was a comforting sound, and Erin soon found herself drifting off again.