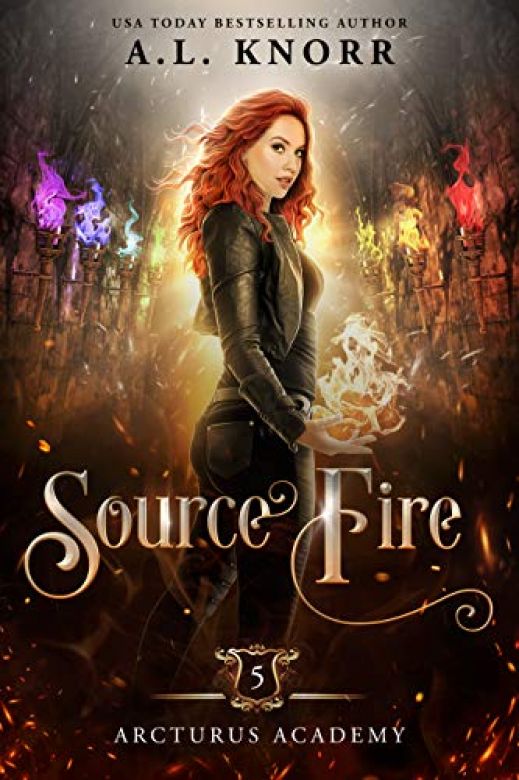 Fires continue to go out, and Nero continues to get stronger. Can the few Arcturus agents and students left solve the riddle of how the two are connected before it’s too late?

In a story that spans several continents, explores the origins of the fire mages and has Saxony in ever-present danger, twists and turns abound. Help comes from unlikely places, but so does trouble. The supernatural community of fire mages face a decimation that is nothing short of genocide. Will any be left standing? Or will the psychopath win the day? What, and who, is Saxony willing to risk to stop the destruction of the species she has only been part of for a year?

The fifth and final book in the Arcturus Academy series is a roller coaster of a ride, zipping you around unexpected twists and turns, flipping you on your head at times, and culminating in an epic showdown. What are you waiting for? Join the remaining fire mages in their fight for survival.

SPOILER ALERT: Sample may contain spoilers if you have not read previous books in the Arcturus Academy series.

No one was smiling.

Wind lashed rain at Chaplin Manor, making the chimney whistle, and the fire swell and crackle.

Ryan, leaning against the radiator under one of the lobby’s huge diamond-pane windows, glowered at the floor, his face pinched and pale. Tomio sat on the front edge of an overstuffed chair, with his elbows on his knees as he looked into the fire with a frozen, sightless stare. Basil paced in front of the fireplace with his hands behind his back, adjusting his glasses every few minutes when they slid down the bridge of his nose. Mehmet—who was short and broad in the flesh, with lively eyes—sat on a couch with his laptop open on his knees, utterly absorbed by the screen. Ms. Shepherd stood behind Mehmet, worrying her bottom lip with her teeth. She had developed a rash on the side of her neck, but I knew it was from her nervous tic.

Now that I’d met the woman in person, she was much less intimidating. Over our video conferences she’d seemed stoic and in control. In person, she seemed nervous and uncertain. Or maybe that was because the situation had deteriorated since Naples. Another fire had gone out. Tomio and I had assumed she was a mage, but we were mistaken about that as well. Ms. Shepherd wasn’t even supernatural; she was ex-military with competencies in logistics and operations.

“So, the new data point proves it, the question is, what can we do about it?” Basil sent a piercing look toward Ryan and the rest of us followed his gaze. Ryan had more first-hand knowledge of Nero’s shenanigans than anyone else, yet he’d been cryptic and evasive about what he knew.

The collective of agencies had added a new metric to their data gathering after Ryan suggested they track the colors of the snuffed mages’ idle fires. The agency had resisted. Idle fire was a thing of childhood, they claimed, something whimsical and cute—certainly nothing to consider in this matter—just a passing phase in the youth of all magi, like losing baby teeth. The collective (under Ms. Shepherd’s leadership) argued that with the limited resources they had, they’d be better off adding more relevant data points, like ethnicity, since there was a correlation, even if it wasn’t consistent.

But Ryan insisted, and when Ryan was proven right, Ms. Shepherd had looked appropriately sheepish and the agency had gone quiet. Idles came in seven colors, like a rainbow. Five had now been snuffed out: orange had been first, last December; yellow in March; red and pink in early July—although we didn’t understand how Nero had managed that only three days apart; and now a fifth one, only two weeks later.

No one openly discussed the fact that Ryan’s father had been a member of the pink group, and was even now speechless in his grief. The pink group had also included my friend Jade, the Academy’s professor of Fire Science, Tyson Hupelo, the beloved Dr. Price and her daughter Cecily, not to mention many others.

Ryan rubbed his eyes with his thumb and forefinger. “The quenching that happened yesterday,” he blinked at Mehmet through a bloodshot gaze, “Do we know which color that was?”

Mehmet looked up, eyes as red as Ryan’s, but from straining at his computer screen. “Yes, it was indigo.”

Silence coalesced again over the lobby.

In the heavy pause, Tomio moved from the chair to sit beside me on the couch. He took my hand and tucked it inside his own with a squeeze. His thigh pressed alongside mine, solid, reassuring.

There hadn’t been time for Tomio and me to think, let alone talk, about our blossoming feelings, or the passionate kiss we’d shared outside the Mount Vesuvius observatory. My throat went dry with desire every time I relived that moment: his lips against mine, urgent, with an edge of desperation. We’d been painfully aware that there was a chance Tomio and Ryan might run into Nero in the subterranean lair. There had been more raw honesty and vulnerability in that kiss than in any other kiss, conversation or glance I’d ever shared with anyone before it. He’d laid it all bare, saying everything without saying a word, his body calling to mine with all the bright clarity of a ship’s bell. There was nothing I wanted more than to be alone with Tomio, listen to him, touch him, kiss him, pretend this whole ghastly nightmare wasn’t happening.

But the threat Nero posed to the remaining magi loomed like a hurricane gathering on the horizon. Janet was missing, and Gage lay in a hospital bed in the quiet wing of a Neapolitan hospital. Comatose.

Angelica had promised she’d call the moment anything changed, but so far, all we’d received were texts with Gage’s vitals and the haunting words: no change yet. There was always a tiny bit of good news (I suspected Angelica made extra effort to wheedle some small bit of encouragement from Dr. Burr or one of the medical staff); if there was no improved measurement to share then Angelica would add something subjective, like: I think his breathing seems deeper today, more robust.

I appreciated her effort to keep our spirits up but every time my phone lit with a notification that Angelica had texted, my heart picked up speed. I longed for the call or text containing only two simple words: He’s awake.

Instead, the same message came on repeat.

We’d arrived at the academy three days ago, on July 21st. England rarely got summer thunderstorms like the one we had right now, but this was Dover. It was unpredictable, temperamental, and also somehow remarkably in tune with how everyone under the academy’s roof was feeling right now.

With all the intel we had, there was one piece of vital information that we desperately needed in order to mobilize: where Nero was going to strike next.

We also didn’t know exactly what he was doing to snuff the fires, but the actual mechanics of it seemed less important than stopping him.

Ms. Shepherd’s voice broke through the fragile webbing of my thoughts. For a second, I thought she’d been addressing me, but she was looking at Ryan.

“There must be something you noticed, something you remember from your interactions with Nero that will give us a clue as to where he’ll go next.” She fiddled with the teal scarf at her neck and did the hard rub underneath it. The woman needed restraints.

Ryan’s jaw flexed with impatience. He looked harassed. “Nero acts immediately on new information, he doesn’t store it for later or sit on it. If he hasn’t revealed the next location for himself then how can I know it? And if he’s only figured it out now, then you’d have better luck scanning your network for flight bookings under one of his aliases, or combing security footage. Just because I’ve spent time with him doesn’t mean—” Ryan’s expression snagged like a fish caught on a hook. He took on the faraway look of someone deeply lost in a revelatory new thought.

The rest of us exchanged nervous glances and waited.

Ryan looked like a newly enlightened sage. “Just, let me think for a second.”

Tomio and I, holding our collective breath on the couch, let out long simultaneous groans as Ryan moved away from the window and headed for the stairs leading to Basil’s office. He settled into pacing in front of the antique telephone booth.

“I think we’ve lost him,” Mehmet muttered matter-of-factly, sounding unbothered as he went back to his laptop.

“I need a drink.” Basil moved away from the fireplace. “Anyone want anything?”

Mehmet’s head snapped up. “I would murder for an old fashioned.”

The headmaster raised his brows.

“Right. Magi. There’ll be no alcohol under this roof.” Mehmet gave Basil a bright, comically exaggerated smile. “I’ll have water.”

“I’ll bring enough for everyone.” Basil left the lobby for the nearest lounge.

Tomio spoke so low so that only I could hear him. “Funny how Mehmet acts like he was never one of us to begin with, now that he’s lost his fire. It’s incredible how well he’s coping.”

I nodded but my mind was on something else. I sank deeper into the furniture and let my head rest on the poufy back as I studied Tomio. “You’ve had fire for a lot longer than me. You were—what, did you say—nine when you were endowed?”

Tomio nodded as he sank into the couch alongside me and let his head tilt back.

“Did you ever see your idle fire?” I asked.

He shook his head. “I must have been too old. Basil did say the idles don’t often show themselves after the age of six or seven. You’re lucky you got to see Ryan’s. It’s super rare for an adult to be carefree enough for it to come out.”

After the snuffings by idle fire color had been confirmed, I’d told Tomio in detail about finding Ryan on the beach, throwing green flames into the wind and watching them twist and spiral into the sky. It had been spectacular, beautiful, and savage in the way only nature could be.

“But we know that I’m green, because Basil and Ryan are green, as was Gage, and I have bonds with them. Had, in the case of Gage.” My voice hitched and I took a hard swallow. “That would logically make you—”

“Violet, since my fire didn’t go out with this last group.”

We stared at one another, thoughts and fears spilling out through our eyes. Tomio touched my cheek and traced my bottom lip with his thumb. “Try not to think about it.”

Whatever Nero was doing and wherever he was headed next, it would most certainly mean that one of us would lose our fire if we didn’t figure out a way to stop him. How would Tomio react if it was him? How would I react if it was me? Would one of us go on fighting to protect the last idle while the other fell apart?