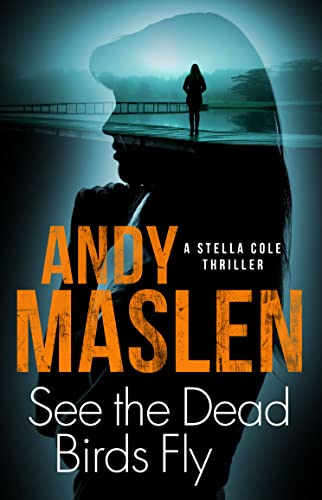 Detective Inspector Cole must catch a serial killer. But a dark figure from her past lurks close by

Now happily living in Sweden, Kriminalinspektör Stella Cole faces off against a psychopath who leaves no clues beyond the victims’ bizarrely altered corpses. As the death-toll mounts, Stella reaches into her own murderous past for clues to the killer’s motives. Because she knows exactly how serial killers evade capture…

It’s been over ten years since Stella went on a killing spree, wiping out every member of a brutal conspiracy that murdered her family. Something her new colleagues in the Swedish Police Authority know nothing about. And she wants to keep it that way. But Internal Affairs boss Nikodemus Olsson senses Stella is hiding something and he’ll stop at nothing to sniff it out.

To complicate matters, Stella’s old boyfriend, forensic psychiatrist Jamie Hooke, arrives unexpectedly from England. He says he wants her back and is willing to help her catch the killer to prove it.

Then someone she thought she’d safely put beyond reach comes calling once more. Little by little, Stella’s trust in Jamie, her colleagues, even herself, is eroded. When a shocking development points directly at someone close to Stella, she has just days to discover the killer’s identity. But is her loyalty blinding her to the truth?

Here are a few comments on earlier books in the series…

"Another great book from Andy. Stella is now working and living in Sweden. She ends up with a case on her desk after a dead woman dressed in her wedding dress was found in the altar of a church. The twists and turns make for an interesting read. If you haven't found the Stella Cole series yet it's one I can highly recommend."
Maureen Russell

"What a good move to have Stella seconded to Sweden, giving her fresh fields to challenge her deductive skills, along with different cultural challenges. I found the storyline gripping and with a foreign setting, gave me a better understanding of different procedurals and customs. A superb addition to a great series!"
Colin M. Willmott

"Another Stella Cole murder mystery set in the snow. I loved it that much that it took me a day and a half to read. I won’t give away any spoilers but if you’re a fan you really need to read this ASAP."
Trisha Buckler

The seventh novel in an enthralling series

Be prepared to lose sleep as you promise yourself ‘just one more chapter’.

Ted Sondersson didn’t always enjoy hauling a load of timber from the forests of northern Sweden to the mid-country sawmills.

Too much anxiety about the price of diesel. The risks of being bushwacked by a biker gang.

Even the temptations of lone female hitch-hikers worried him. Suppose they suddenly turned out to have strung-out boyfriends with hunting knives and a wayward look in their red-rimmed eyes?

But today was different. The run had been long, but quiet. And, most importantly, profitable.

He was on his way home with a fat bank transfer sitting snugly in his account. Enough to pay for the repairs to the summer house and maybe even a little left over for a new set of skis.

He thought of Inga, wearing an embroidered peasant top with no bra beneath it, and those jeans she knew he liked. The low-slung ones that showed off her arse. His cock stirred and he allowed himself a brief but enjoyable fantasy of taking his wife of thirteen years from behind.

He glanced in his mirrors. The road was clear. Ahead, too. One of those rare but exquisite moments when the motorway seemed his and his alone. Truckers had a name for the phenomenon. The ghost road.

You could imagine, for a brief while, that all the other vehicles that slowed you down or made you hiss in anger as they chopped and changed lanes without indicating or even keeping pace with the rest of the traffic, had simply vanished. Removed from the road by a friendly god who looked down kindly on those who drove the big rigs for a living.

Ted glanced across at his iPhone, resting atop the paperwork fanned out on the passenger seat. No cop cars in sight. Nobody to see him making a call and wag a finger up at him. Maybe he’d call Inga.

He leaned sideways for the phone. He grunted with the effort: the Scania had a wide cab and the passenger seat was a stretch. Finally, taking his eyes off the road for as little time as he could possibly manage, he snagged the phone and hauled himself back into an upright position, juggling the phone into position so he could thumb the icons that would dial Inga.

He glanced up at the road as the call connected.

‘What the fuck!’ he yelled.

Was it an angel, staggering onto the smooth, dark tarmac of the E18? The outspread wings must have been two metres across at least. Three, even. But what kind of angel had wings that colour? Black as sin. Black as night. Angels weren’t real, anyway. And why would an angel be making that face? Eyes panicked circles. Mouth an ‘O’ showing white teeth and red tongue. Black fur of pubic hair against bone-white skin. Did angels even have genitals?

While these brief, chaotic thoughts raced around Ted’s brain, his body was performing other movements, without any conscious control. He’d dropped the iPhone and grabbed the wheel with both hands. His right foot had leaped from accelerator to brake and his thick, muscled right leg was extended, exerting fierce pressure on the pedal.

His arms were locked out at the elbows. It was one of the things you learned early on driving a big rig. You absolutely did not swerve to avoid animals in the road. Maybe in a sports car or even a family saloon, you might wrench the wheel over and give a moose or a wolf the scare of its life as you slewed around it before regaining the carriageway, heart hammering, adrenaline making your knees shake and your leg muscles tremble.

But in a forty-tonne Scania eighteen-wheeler? Even without a couple of hundred pre-processed pine logs on the trailer? No. You did not swerve. Not unless you wanted the whole damn rig ending up on its side with you smashed up in the cab like a raw egg in a blender.

Ted hit the angel at sixty three kilometres an hour. The bang reverberated through the cab. Blood and feathers flew up and coated the windscreen. A giant wing cartwheeled crazily left to right trailing long streamers of red and white…stuff…before landing in the field of sunflowers to the right of the motorway.

The airbrakes screamed and whistled like a locomotive entering hell. Ted yelled in horror as the angel’s face slammed into the windscreen right in front of him and bounced away, leaving a bloody imprint in which he could clearly see the outlines of the eye sockets.

He brought the truck to a stop. His heart felt like it might burst free of his rib cage and leap, pumping blood, out onto the dashboard.

‘What the hell? What the shit-Godammit-to-hell?’

He swung himself down from the cab and ran around to the front of the truck.

Gobbets of flesh, wet and stringy, were stuck between the chromed teeth of the Scania’s vast grille. He saw a penis and turned aside to vomit onto the ground. The black feathers were everywhere, clinging to the grille, the headlights, the air intakes beneath the licence plate. Most were attached to thin white bone fragments. Others adorned the metalwork, glued there with dark, sticky blood.

Ted ran up and down the verge, searching desperately for the rest of the angel, yet terrified by the thought he might find it.

‘Oh God,’ he wailed, as he saw the ruined remains of the body ahead of his truck, splayed and broken.

The ghost road was full again. But Ted was oblivious to the cars and trucks passing him, heads turning, curious, to see what was causing this burly trucker to stumble on rubber legs back to his rig. He scrambled up into the cab and grabbed his phone.

‘Come on, come on, shit-of-the-devil, come on!’ he shouted as his fingers, suddenly as dextrous as work gloves full of sand, refused to obey his instructions to call the police. Finally, he managed.

‘Hello, Emergency. What service do you require?’