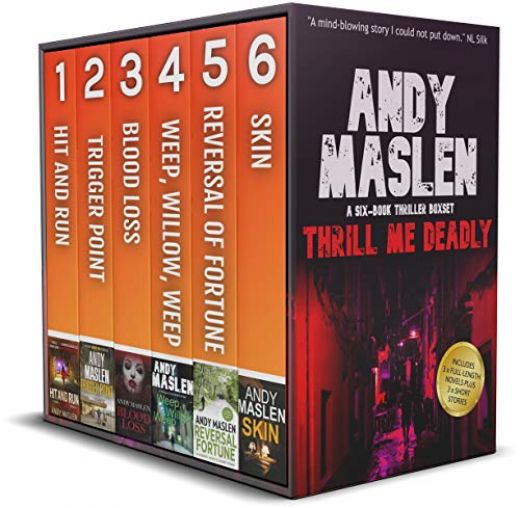 In this boxset of six thrilling stories, you will meet some of the toughest heroes ever to come from a writer’s imagination.Detective Inspector Stella Cole. A badass cop who becomes a deadly vigilante after her family is torn apart.Ex-SAS member Gabriel Wolfe. A martial arts expert skilled in languages and ancient techniques learned from a mentor in Hong Kong.Caroline Murray. A lawyer and unlikely vampire hunter until she receives a visit from a leather-clad stranger who tells her her fiancé is in danger.You get three full-length novels, including the first books in the author’s best-selling series. And, as if that weren’t enough, you also get three short stories, ideal for a quick, one-sitting read.The novelsHit and RunStella, Richard and baby Lola. A perfect family. Stella’s a high-flying cop and Richard’s legal work aims to expose corruption in high places. But powerful people want Richard dead, and they don’t care who gets in the way. In a calculated act of violence, the family is torn apart and Stella is plunged into a nightmare of grief, barely surviving on alcohol and pills.A year later, after compassionate leave, she starts to pick apart the original investigation into the hit and run that left her a widow. Her shocking discovery forces her into a dangerous world of lies and cover-ups where the law doesn’t apply. And the only rule is kill or be killed.Trigger PointTwo Special Forces veterans battle a power-hungry billionaire. Gabriel Wolfe and Sean Cunningham have just days to stop Sir Toby Maitland seizing power in the UK by force.Working undercover, Wolfe travels to the US with Maitland. His brief, discover Maitland's plan and then stop him. As he gathers intel, he teams up with an ex-Delta Force operator, Shaun Cunningham. The two men bond over shared experiences in service, although Wolfe must hide the terrifying PTSD-induced visions that haunt him.Blood LossCaroline Murray thinks vampires are the stuff of fantasy. A successful lawyer, engaged to a brilliant, if erratic, scientist, she has no idea of the horror about to engulf her.In a series of journal entries, texts, emails, blog posts and "Hunt Books", we learn how Caroline discovers the truth about vampires. Their leader in the UK, Peta Velds. And what she has to sacrifice to defeat them.The short storiesWeep, Willow, WeepIt’s 3.00 a.m. and newly promoted Detective Inspector Stella Cole catches her first murder. An intruder has murdered the husband of a glamorous older lady who turns out to have an interesting past.As Stella investigates, pieces of the puzzle come together but then fly apart and she’s left wondering how she’s going to solve the case.Reversal of FortuneA walk with his friend's terrier turns into a mission to exact retribution on a local bully when Gabriel Wolfe finds one of his female neighbours crying at the wheel of her car.Lander Reeve is a mega-successful bond trader with a big mouth and an even bigger SUV. He's been running Gabriel's neighbour off the road and Gabriel decides it's time to put a stop to the man's behaviour. For good.SkinIn this sharp little horror story, a rich industrialist who collects Nazi memorabilia spots an odd-looking antiques shop on his drive home.His insatiable desire for the most twisted artefacts of the camps sets him on collision course with powerful forces beyond this world. What he is offered by Zadok, the thin, pale man behind the counter, will change him for ever.DOWNLOAD YOUR COPY OF THRILL ME DEADLY NOW

You can find a sample of each book included in this set on their individual book pages. Just go to the author to find them all.