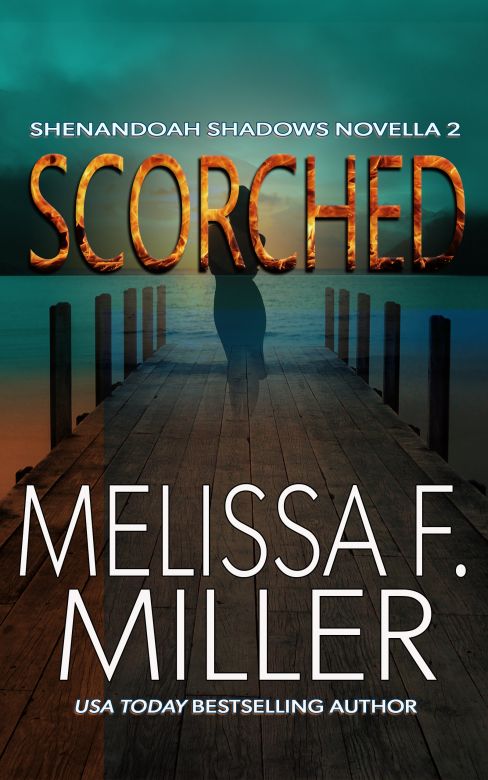 Olivia Santos unclipped the lavalier microphone from the neckline of her rose-colored silk shell and dropped it down the inside of the top, shivering as the cold wire skimmed her bare skin. Then she reached around to the small of her back and unhooked the transmitter pack from the waistband of her black pants. She wrapped the wire neatly around the chunky rectangular pack and handed the equipment to the sound intern hovering nearby.

He bobbed his head and flushed beet red. “Thanks, Ms. Santos. You were great today.”

Cade Bracken, the host of “Political Preview” approached, and the intern scurried off the set as if he couldn’t get away fast enough. Apparently the rumors about Cade’s temper were true. He’d never shown Olivia his nasty side, but it was legend.

“Oh, our viewers agree, Olivia. You’re our most popular guest every time you do a segment. Maybe you should consider making it permanent. We could use a dedicated intelligence community commentator, you know?”

She smiled a sickly smile and suppressed a shudder. Oh, hell no. She only did these sporadic appearances on the advice of counsel—and her personal security consultant. A burned former CIA operative made a juicy assassination target under any circumstances. But one who’d outed an entire dirty senate subcommittee? Yeah, she was a dead woman walking.

Her instinct was to go to the mattresses, hunker down somewhere off the grid, and wait for the storm to blow over. Ryan Hayes, the government lawyer handling the prosecutions, and Jake West, her security guru, had convinced her to do the exact opposite: press interviews, television appearances, a freaking book deal. All designed to keep her in the public eye under the theory that murdering a public figure was too great a risk for any of the many, many powerful people who wanted to see her dead.

Sometimes, though, she fantasized about taking her chances if it meant returning to a quiet, private life. Maybe after the trial was over, she mused. She could hole up in Shenandoah Falls, sit by the lake, watch the leaves change color.

She realized Cade was waiting for her to answer a question that she hadn’t heard. “I’m sorry, could you repeat that?” She blinked innocently.

“I said what do you think about the rumor that we’re about to broker a peace deal with Boko Haram?”

She furrowed her forehead. “I’m sorry, what?”

“Don’t do that thing with your face, Olivia. If you want a future in television, you can’t go around creating ruts and crevices.” He pointed to his own unlined brow as proof.

She relaxed her face. “Right. Thanks. Now what’s this about Boko Haram?”

“I’m sure I don’t know the details. I thought you might. Word on the street is that there’s a truce in the works, and the U.S. military is in the thick of it.”

She shook her head. “That can’t be right, Cade.”

He grinned triumphantly. “That’s what I told my source. There’s no way our government would give succor to terrorists. Right?”

“Right. Care to divulge your source?” She fluttered her eyelashes.

That earned her a snort. “You can’t flirt information out of a gay man, Olivia. At least not this one. And I’m an old-school journalist. I never reveal my sources.” He paused meaningfully. “You might try asking your friends at Potomac Private Services. They may have heard something.”

She was going to press him for details, but a harried-looking producer raced across the set and skidded to a stop between them, jabbing an emphatic finger at the schedule on her tablet.

Olivia walked slowly out of the studio, her heart thudding against her breast. Potomac was the last place she could poke around for information. Although Jake owned the company, she never met with him at his office. She didn’t even call him there—only on his personal cell phone. The risk of running into Trent Mann at Potomac was too great. Even though, Trent—of all people—was probably the best source of intelligence on Boko Haram.

He’d saved her life and broken her heart all in one day. Despite his promise to the contrary, he’d walked out of her life without a backward glance.

She’d made a fool of herself, calling him after she filed for divorce from Mateo. And again when the indictments came down against the Senate Telecommunications Committee. And again when Jake told her Trent had totaled a race car in a spectacular on-track crash. But he hadn’t returned a single phone call. So, she’d tucked away the memory of the heat that had blazed between them, constructed a protective barrier around her heart, and set her chin toward the future.

She’d have to find another way to scratch her curiosity itch. Because, as far as she was concerned, Trent Mann was firmly in her rearview mirror.

Trent scrabbled for the remote as the footsteps in the hallway grew louder. He aimed the device at the television and hurriedly clicked the power button. But Jake appeared in his doorway as the program’s outro music cut off.

He gave Trent a knowing smirk. “Just catching up on your ‘Political Preview’ viewing, huh?”

“When did you become such a lousy liar? I thought you undercover guys could bluff with the best of them.”

Pretty good was an understatement. Olivia looked like an ice queen. Cool, composed, elegant. Her sleeveless pinkish-red top made her brilliant blue eyes pop and showed off her toned, defined biceps.

“I guess,” he managed thickly, lost in a memory.

Jake drew his eyebrows together. “Get a grip. I meant she came across well. Articulate, well-informed, but humble. Likable.”

“She enter a popularity contest that I don’t know about?”

“How would you know if she had? From what I hear, you haven’t talked to her since the night it all went down.”

Trent glanced away but didn’t answer.

“Pretty crappy way to treat someone you care about, if you ask me.”

Unperturbed, his boss and friend continued, “If you had, I’d have told you that you’re acting a fool.”

Jake stared at him for a long moment, then shrugged. “Suit yourself. I doubt Carla would have wanted you to live out the rest of your life as a miserable hermit, but, hey, have at it.”

“This isn’t about Carla.”

“Was married. She’s not anymore, and I know you know that.”

It was true. She’d left a message for him when she’d initiated the divorce proceedings, and Ryan had made a point of mentioning it when the divorce was finalized. He couldn’t explain, even to himself, the real reason why he’d been avoiding her.

That’s not strictly true, he chided himself.

“I assume you’re not here to talk about Olivia.”

Jake tossed a file folder on Trent’s desk. “Since you’re still out of commission, I thought you could take a look at this for me.”

Trent had cracked three ribs and broken his left wrist when he’d rolled the Mustang. He was healing nicely, but he couldn’t get back in the car with a student until the wrist was a hundred percent. So, he’d been pulling all manner of desk duty at Potomac. He itched to get back behind the wheel, but his assignments gave him a new appreciation for the analysts.

“What is it?” He flipped open the folder.

“NSA has picked up some chatter in the usual dark corners of cyberspace. There’s talk that someone inside the U.S. military is negotiating with jihadists in Nigeria to overthrow the president and install a new regime.”

Trent dropped the folder. “Nigerian jihadists? As in Boko Haram?”

“Your guess is better than mine. You were the one stationed in Abuja. But, yeah, probably.”

“There’s no way the Pentagon would back a terrorist state, Jake. No way. If anybody is mucking around, it’d be the spooks at the CIA.”

“That’s what I thought, too. But that’s not what the chatter suggests. Just take a look at the files. Unless … it’ll be too hard. With, you know, your history.”

His history. That was a hell of an oblique way to say ‘unless the memory of how you let your partner and lover walk into a Boko Haram ambush and get butchered might interfere with your ability to assess this information.’

Trent’s heart pounded painfully against his fractured ribs. He pushed the folder across the desk. “I don’t think I’m the right guy for this, Jake. Sorry.”

Jake studied him for a moment, spun the folder around, and pushed it back. “Why don’t you think on it for a while. The NSA reached out to us with this for a reason.”

Trent gnawed on his thumbnail. It wasn’t a surprise that the National Security Administration had given the lead to Jake. Potomac had a reputation for being a different kind of PMC. Many private military contractors were enthusiastic lawbreakers, up for any dirty deed, wet work, mercenary BS they could get into—soldiers on steroids with no oversight or guardrails. Not Potomac. Jake had built Potomac to be a place where a guy’s ethics never had to conflict with his assignment. Where honor, duty, and integrity actually meant something.

But could Trent trust himself to handle an investigation into Boko Haram without reliving his relationship with Carla—and her grisly end? Could he bear to face the ghost who dogged his every step?

“Just sit with it for a while. Don’t decide yet.”

Jake turned and walked out. Trent dropped his head into his hands and closed his eyes, pushing away the images that floated behind them.