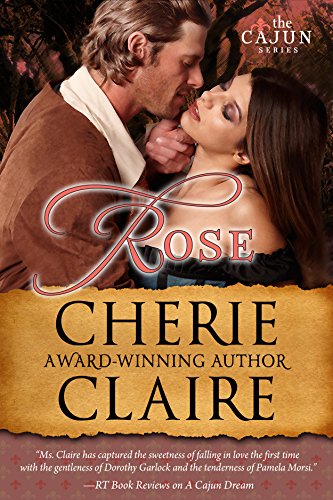 Rose Gallant was always the agreeable sister, which is why she'll do anything to help her Cajun family find their father in the wilds of Louisiana. Joseph Gallant was separated from Rose and her two sisters thirteen years ago during le grand dérangement, the brutal exile by the British from their Nova Scotia home. So when a rich Louisiana Creole offers marriage and a chance to help, Rose believes the union will reunite her family. But it's the passionate and handsome Coleman Thorpe that sets her heart to flame. Thorpe is both English and Protestant and therefore forbidden, but Rose will soon learn how determined a man can be in love, able to break down all boundaries and bring a family together.

"Ms. Claire's tale of the Acadians (Cajuns) is rich in Old World traditions as she explores the early beginnings of what was to become the melting pot of American society. Rose and Coleman's love is the stepping stone to a new beginning and readers' hearts will be warmed by their love and its powerful message."
—Romantic Times Magazine