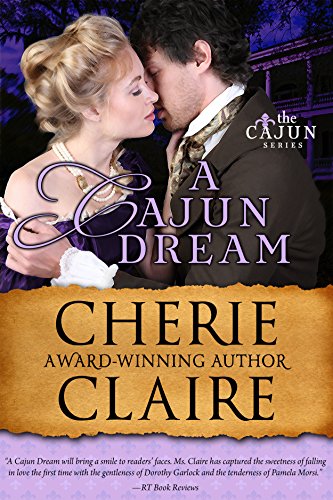 Spurned by the Americans living in the South Louisiana town of Franklin because of her Catholic upbringing and forbidden to associate with the French Creoles and Cajuns by her father, Amanda Rose Richardson believes she is destined to become an old maid. When she finds herself in a compromised situation, it is her good friend René Comeaux, a proud Cajun who rescues her. But can René convince her father his intensions are honorable and win the heart of the "Jolie Blonde" he adores?

A Cajun Dream is an award-winning delightful romance between a very proper American heiress and the proud Cajun who is determined to win her love.

"A Cajun Dream will bring a smile to readers' faces. Ms. Claire has captured the sweetness of falling in love the first time with the gentleness of Dorothy Garlock and the tenderness of Pamela Morsi." — Maria C. Ferrer for Romantic Times magazine

"What a marvelous debut! Cherie Claire is sure to earn a bevy of fans with this charming and heartwarming tale." — Rexanne Becnel, author of Blink of An Eye