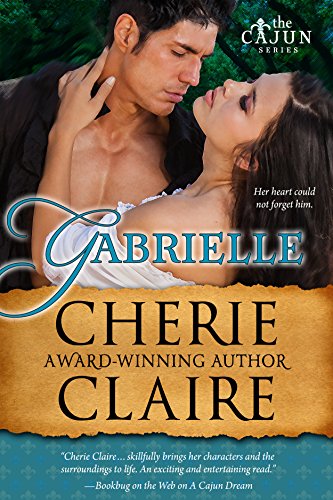 Years have passed since the Acadian Gallant family was separated from their patriarch during the British exile from Nova Scotia, but Gabrielle and her mother refuse to give up. They travel to the sleepy shores of Bayou Teche for Joseph Gallant's return, while Gabrielle also waits for a visit from Captain Jean Bouclaire, a Louisiana privateer who has stolen her heart.

Captain Jean Bouclaire has finally decided to settle down and he knows the right woman to ask. On his way to join Gabrielle he is challenged to a deadly duel that results in his exile from the Louisiana Territory. Now a fugitive, he must decide whether to flee the colony or risk his life for one last glimpse of his dark Acadian beauty.

“Ms. Claire's characters are vividly portrayed against the atmosphere of the swampland, and living in exile in a strange land and dealing with all that it entails. I felt I was right there with Jean and Gabrielle.”
—Suzanne Coleburn, The Belles and Beaux of Romance

"Ms. Claire's treatment of the Acadians' (Cajuns') removal from Canada and their difficulties in settling in Louisiana are richly described. These are passionate people who are forced to endure hardships and who survive in spite of them. It is love that propels them to continue the search for happiness. This is a well-learned lesson for us all."
—Romantic Times Magazine

"The story is just chock-full of action and keeps the readers enthralled as it races to an end."
—The Romance Journal