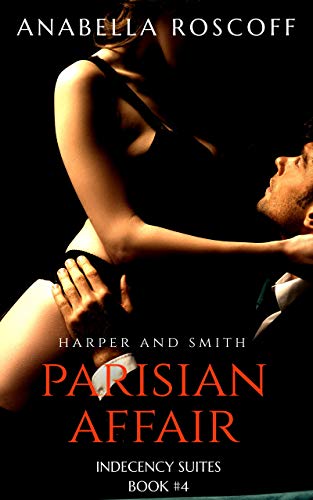 Reece and Jacob Harper are twins. Identical twins.
They're self-assured, highly prized, and expensive.
One's the joker who abides by the rules. And one isn't.
But then Reece has every reason to be dominant.
Without him, this whole venture would never have started.

Angel is waiting in a Parisian penthouse apartment. She'd rather not be kept waiting at all. Especially as her professional life ensures everyone does exactly what they're told, exactly when they're told it. It's probably why she's got the particular penchant she has for being in charge.
But when they finally arrive – sparks fly.
With one of them, anyway.
And the moment becomes something she didn't quite request.

The Indecency Suites are a collection of books designed to get your blood pumping quickly and your juices flowing just as fast. They're everything and anything, and all in between.

The book is MFM.

Nb: The Indecency Suites are 18+ reads.
They are intended for mature audiences and can be read as standalones.

Being twins makes that all the more interesting.

And we’ve been doing this for a long damn time.

“And then she gets all freaky on me, ass waving about in my face as she asked me to stick my tongue in it and prised her cheeks open.” He puts the coffee down and looks along the Rue Saint Dominique, checking his watch for time. “Reece, you know me, I’m up for whatever, but sticking my tongue in an ass that’s just had someone else’s dick in it, after that dicks been in someone else’s ass, and I was like – no.” The thought doesn’t seem to be stopping him munch on a croissant veraciously, though. “Anyway, who’s this one?”

I smile and pick up my paper, standing and ushering him up, too. Angel Smith is who this one is. I’m not convinced it’s her real name, but then it isn’t my position to ask. She wants to be called Angel for a few hours, she can have that with my blessing. Perhaps she is one. Although, with what the message board requested, I’m doubting it.

“I don’t know, perhaps she’s a demon in disguise.”

He laughs and then starts eating his croissant again. Why the hell he’s eating croissant at nine in the evening I haven’t worked out, but he’s constantly eating. I don’t even know how we came out of the same womb. Same dirty brown hair. Same height. Same build. Same everything apart from his need to eat all the time and the way he chatters on and on. I’m the less talkative one, choosing action over talk. Women seem to love that, too. One broody and mean. One who talks and gets them all wound up for what they’ve purchased.

“Yeah. I’ve done about six jobs here now. Feels like home every time I get back. It’s the French women, I think. They’re hot as fuck. And they’ve got that accent going on. And the language. Sounds sexy, right?” I can take it or leave it. “Come on, Reece. You’ve got to admit it. It’s nice here.” It’s alright. Nothing special.

“That’s the Bostonian in you talking. Constant fucking rain.”

It’s probably true. I like home, like my apartment and the fact that everything has its place and everything is in place.

I keep walking, amused as he continues his verbatim regarding another woman he met last month while he enjoyed Russia. I end up drowning the tone of him out and just walking, head up and gazing around at the architecture. Guess it’s pretty here, a show of age and beauty. Still doesn’t stop me thinking about that woman I met three years ago, though. She was so quiet. One of those rare beauties that I’ll never find again. Might have stopped all this for her, if she’d asked me. It’s not like we’re locked into a contract like some of the rest of them. We’re open source, called on when needed for something specially requested. Jacob does more than me, happy to get his dick out in any kind of group orgy, but I’m more particular, and this one we’re heading for now was intriguing.

“She a freak then?” What? I look over to him and watch as he pulls another croissant from somewhere. “Freaky, or safe?”

“She requested both of us. Together. Both dicks. I’m assuming freaky.”

I snort and head us around the next corner, looking at the hustle of traffic and scooters that careen around the avenue. He’s welcome to it. I want to look into her eyes and see the look of her pouty red lips when she squeals. She wants both of us, she can look at the important one while she takes us.