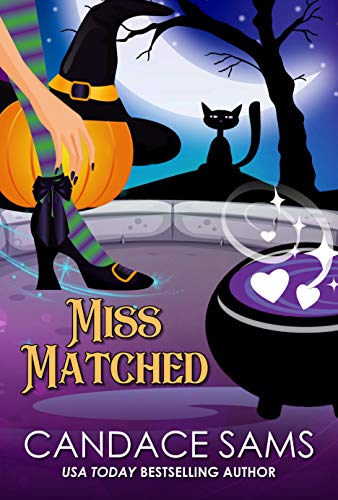 This book is a fun easy read. It captures the imagination. The writer does a great job, as always.

For those who like Halloween no matter what time of the year or just like a short fun read.

I enjoyed reading this. It came at a time I needed something good in my life. This story cheered me and made me happy. What more could I ask for?

In a world of enchantment, where reality is suspended...the Halloween season starts normal enough until a drastic, last-minute choice is made.

A young witch named Kate Cauldron decides that life alone is no life at all.
She impulsively enters a magical, paranormal contest called The Pumpkin Walk. All to let Fate decide her forever mate.

Kate finds herself mated to an impressive Goblin and he's hers for the rest of eternity. Belches, burps and all, he's hers for life. Whether she wants him or not!

Wizards, magicians, sorceresses and Halloween...spells, black cats, bats, cauldrons and ghosts. A full moon and starry nights.
Everything that goes with this mystic time of year is offered in this seasonal fantasy. It's the most unusual Halloween you can imagine. Everything magical is about to happen.

For one witch, a great adventure unfolds. Fate not only matches her with the last man she ever expected, but she must fight a very dangerous enemy in pursuit of happiness.

Rating: sweet and fun
An All Hallow's Eve short story

A lonely young witch decides to enter a contest to win the man of her dreams.

When he turns out to be a Bocan (a sort of goblin) she must - by the rules - accept him as her mate for life.

Sometimes, we can make a wish and get exactly what we need!

“By the creatures’ love he has won.

“By the virtue shown when battle’s done.

“By the tear he sheds at dawning sun.”

Kate Cauldron paced slowly. Once the decision was made, she couldn’t back out. Those were the rules.

With her right hand, she reached inside her cloak and withdrew a lovely old gold watch. Simultaneously, the fingers of her left hand caressed the small silver star hanging around her neck.

The watch had belonged to Grandpa. The pendant had been Grandma’s. The only real treasures the couple ever owned; these were now her most treasured possessions.

She’d taken up permanent residence with Grandma and Grandpa when her parents died in an accident, right after she’d turned three. The fact she’d been staying with the older couple when that accident happened was the only reason she was still alive.

Within the last eighteen months, Grandma Hester and Grandpa Uriah had followed her parents into the next life. Now she was quite alone in the world.

At the age of twenty-five, she had a choice to make. Midnight was fast approaching.

Revelers in the mystical town of All Hallow’s Hollow had gathered around the perimeter of what was once a jousting field. Medieval-style booths with brightly colored banners dotted the landscape to celebrate the season.

This fair was the way Hollowers, as townsfolk were quaintly dubbed, celebrated the coming holiday.

Her fellow witches were chatting and trading spells.

Assorted booths had been set up to sell the latest enchanted potions, crystals for divining, and candles for spellcasting.

While the goings-on and bargains would have normally been more than entertaining, the merriment of this most special time of year was lost on her.

The celebration this year would be enormously important.

The choice she was about to make had taken on a life of its own, and she’d fretted over it to the exclusion of all else.

The moon was full and autumn leaves blew around her booted feet. Torches illuminated the fronts of booths and shops. The setting couldn’t have been more appropriate.

She took a deep breath and felt the cool air fill her lungs before putting her watch back into her pocket. Aside from all the assorted games, cooking contests, and livestock shows, one special event drew everyone forward just before the old clock tower in the town square struck twelve. It was by far the most significant event of the entire year.

Old-fashioned cakewalks had been held all day long. As music played, participants walked around in a circle where numbered steppingstones lay embedded in the ground. If a person was on the drawn number when the music stopped, that party was awarded a sumptuously decorated Halloween cake. Every year, the Ladies of the Order of Magical Whimsy spent days baking and preparing the confections. This year, they’d outdone themselves. The treats were magnificent. Cakes were piled high with thick, creamy frosting. Pastries oozed caramel and fresh fruit. These were neatly stacked next to hard candy that sparkled in the bright oranges, yellows, bronzes, and golden hues of the season.

As far as the day’s entertainment went, The Pumpkin Walk was quite different.

This special contest had only two rules. First, participants had to accept Fate’s decree for life. Second, no one could use any magic during the event.

The twist was that there were actually two walks held at the very same time. These were separated by hundreds of yards; all so that the participants in the paired venue could not see each other.

If the music stopped, and a contestant at one of the old jousting field was on the winning number drawn by the wizard, that participant would be forever joined with the contestant whose number was picked by the sorceress at the other end of the field.

Each simultaneously chosen couple would meet in the middle of the old jousting field where all the townsfolk could wish them joy in their new lives together. That couple — total strangers to each other— was considered forever mated.

In the past, Kate always got a little teary-eyed when she extended her congratulations to the newly joined couples. And while any witch might conjure a mate, such things were rarely ever done.

Conjuring a lover was considered cheating by everyone who practiced magic. Worse, the results of such magical manipulations were always dreadful. Couples called together by using spell work almost always ended up hating each other forever.

The Pumpkin Walk was one way that more adventurous or even introverted people could find their life mate, letting Fate make the choice for them. In other words, although no one was forced to participate in the competition, many took the challenge when they could not find a suitable mate by the usual dating means.

Kate had had more than her share of betrothal offers, without the help of the Pumpkin Walk. But none of those who’d offered for her hand had taken her fancy. Nor had she been in the market for a forever mate.

Joining in that fated walk became a serious option only a couple of weeks ago.

Her own beloved grandparents had been participants in the Pumpkin Walk. That’s where they’d met and had begun their lives. They’d never been sorry, for no two people had ever loved each other more. The walk had joined them for a life that had been filled with wonder and adoration.

In her heart she’d always yearned for a mate who was strong and brave. Aside from the poor results that magic offered, she personally didn’t know of a spell that could command nature to send someone perfect, with lush hair, romantic dark eyes, or a great fortune. The last of these attributes was far down on her list after seeing how much fun and love her grandparents had shared. And with very little money at all.

But she could still dream of someone different. In this respect, she considered herself no better or worse than any other girl her age.

Deep in her heart, however, what she wanted really wasn’t someone of grand qualities, with a face like Adonis.

Sure, that quality had played around in her brain. But what she truly, deeply craved — more than anything else in the entire universe — was a mate who’d be just as honest and kind as Grandpa. Someone who would love her with every breath he took.

She wanted someone who would look at her the way Grandpa had looked at Grandma.

If she could find such a person, then happiness should surely follow.

Truth bid her to accept that looks really didn’t matter. Not even if her lover was as lacking in beauty as the underside an old bog log.

As long as he was an honorable and truly nice person, all would be well.

Now she’d reached the age limit, and this was the very last year she could join this ancient custom of letting Fate choose her mate.

In this way, she’d be matched well and truly, as the powers of the celestial spheres decreed.

Still, the decision wasn’t an easy one. Once done, she’d be outcast if she didn’t accept the consequences. Any perceived mismatch meant that she hadn’t been really ready; that she’d been deemed cosmically unworthy of the night’s event. She had to go into the walk with her heart and conscience in the right place.

Time was running out.

Either she must add her name to the list this evening or forever pass on whatever chance Fate might bring.

She lifted her head and courageously squared her shoulders.

As it had for her grandparents, Fate would be kind.

That amorphous entity that everyone believed in would not let her down.

“I’m signing up,” she muttered and then entered the booth where the presiding sorceress would take her name.

From there, she’d be placed on one of the numbered steppingstones at the far end of the field. Her journey toward a new life would begin when the music started and she took her first stride.

“So mote it be,” she whispered to herself. “This night, I’ll accept whatever comes my way. Look out universe…just call me Miss Matched.”