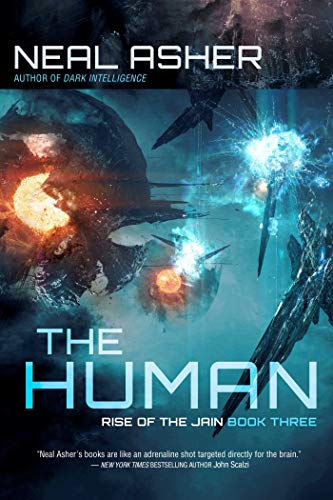 In The Human, the final book in Neal Asher’s epic Rise of the Jain trilogy, an entire galaxy hangs in the balance as the ancient and powerful Jain threat emerges anew . . . A Jain warship has risen from the depths of space, emerging with a deadly grudge and a wealth of ancient yet lethal technology. It is determined to hunt down the alien Client, and will annihilate all those who stand in its way. So Orlandine must prepare humanity’s defence. Both humanity and the Prador thought their ancient foe—the Jain—had perished in a past age. And they resolve to destroy these outliers at any cost. Orlandine wants the Client’s inside knowledge to act, but the Client has her own agenda. Earth Central therefore looks to the Prador for alliance, after the Jain destroy their fleet. However, not everyone is happy with this, and some will do anything to shatter this fragile coalition. As the Jain warship makes its way across the galaxy, it seems unstoppable. Human and Prador forces alike struggle to withstand its devastating weaponry. Orlandine’s life work is to neutralize Jain technology, so if she can't triumph, no one can. But will she become what she’s vowed to destroy?