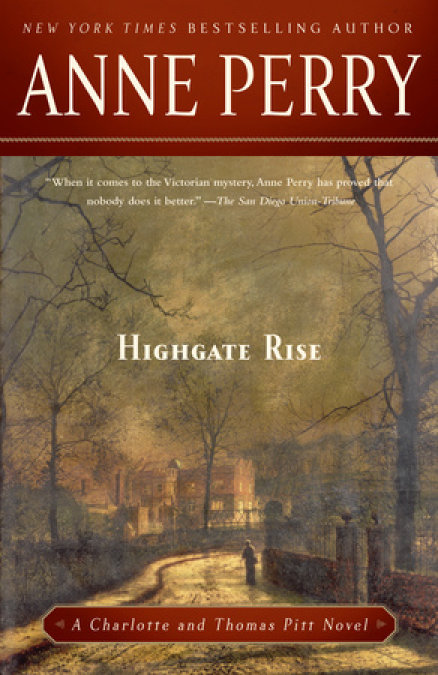 Clemency Shaw, the wife of a prominent doctor, has died in a tragic fire in the peaceful suburb of Highgate. But the blaze was set by an arsonist, and it is unclear whether she or Dr. Shaw was the intended victim—or did the doctor himself set the blaze in order to inherit his wife’s large fortune? Baffled by the scarcity of clues in this terrible crime, Inspector Thomas Pitt turns to the people who had been closest to the couple—Clemency’s stuffy but distinguished relatives. Meanwhile, Pitt’s wellborn wife, Charlotte, retraces the dangerous path that Clemency walked in the last months of her life, finding herself enmeshed in a sinister web that stretches from the lowest slums to the loftiest centers of power. 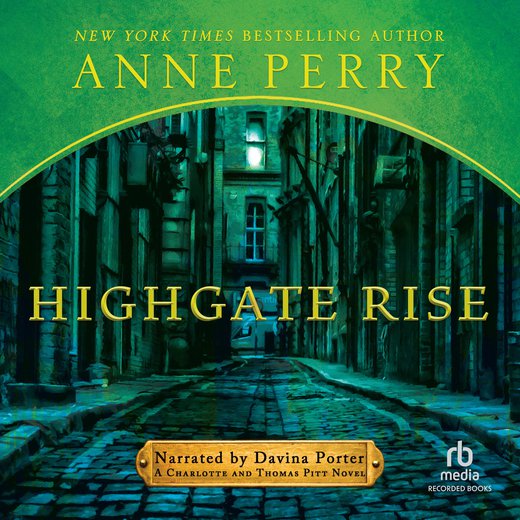 INSPECTOR THOMAS PITT STARED at the smoking ruins of the house, oblivious of the steady rain drenching him, plastering his hair over his forehead and running between his turned-up coat collar and his knitted muffler in a cold dribble down his back. He could still feel the heat coming from the mounds of blackened bricks. The water dripped from broken arches and sizzled where it hit the embers, rising in thin curls of steam.

Even from what was left of it he could see that it had been a gracious building, somebody’s home, well constructed and elegant. Now there was little left but the servants’ quarters.

Beside him Constable James Murdo shifted from one foot to the other. He was from the local Highgate station and he resented his superiors having called in a man from the city, even one with as high a reputation as Pitt’s. They had hardly had a chance to deal with it themselves; there was no call to go sending for help this early—whatever the case proved to be. But his opinion had been ignored, and here was Pitt, scruffy, ill-clad apart from his boots, which were beautiful. His pockets bulged with nameless rubbish, his gloves were odd, and his face was smudged with soot and creased with sadness.

“Reckon it started almost midnight, sir,” Murdo said, to show that his own force was efficient and had already done all that could be expected. “A Miss Dalton, elderly lady down on St. Alban’s Road, saw it when she woke at about quarter past one. It was already burning fiercely and she raised the alarm, sent her maid to Colonel Anstruther’s next door. He has one of those telephone instruments. And they were insured, so the fire brigade arrived about twenty minutes later, but there wasn’t much they could do. By then all the main house was alight. They got water from the Highgate Ponds”—he waved his arm—“just across the fields there.”

Pitt nodded, picturing the scene in his mind, the fear, the blistering heat driving the men backwards, the frightened horses, the canvas buckets passed from hand to hand, and the uselessness of it all. Everything would be shrouded in smoke and red with the glare as sheets of flame shot skywards and beams exploded with a roar, sending sparks high into the darkness. The stench of burning was still in the air, making the eyes smart and the back of the throat ache.

Unconsciously he wiped at a piece of smut on his cheek, and made it worse.

Suddenly rivalry vanished as Murdo remembered the men stumbling out with the stretcher, white-faced. On it had been grotesque remains, burned so badly it was no longer even whole—and yet hideously, recognizably human. Murdo found his voice shaking as he replied.

“We believe it was Mrs. Shaw, sir; the wife of the local doctor, who owns the house. He’s also the police surgeon, so we got a general practitioner from Hampstead, but he couldn’t tell us much. But I don’t think anyone could. Dr. Shaw’s at a neighbor’s now, a Mr. Amos Lindsay.” He nodded up the Highgate Rise towards West Hill. “That house.”

“Was he hurt?” Pitt asked, still looking at the ruins.

“No sir. He was out on a medical call. Woman giving birth—Dr. Shaw was there best part of the night. Only heard about this when he was on the way home.”

“Servants?” Pitt turned away at last and looked at Murdo. “Seems as if that part of the house was the least affected.”

“Yes sir; all the servants escaped, but the butler was very nastily burned and he’s in hospital now; the St. Pancras Infirmary, just south of the cemetery. Cook’s in a state of shock and being looked after by a relative over on the Seven Sisters Road. Housemaid’s weeping all the time and says she should never ’ave left Dorset, and wants to go back. Maid of all work comes in by the day.”

“But they are all accounted for, and none hurt except the butler?” Pitt persisted.

“That’s right, sir. Fire was in the main house. The servants’ wing was the last to catch, and the firemen got them all out.” He shivered in spite of the smoldering wood and rubble in front of them and the mild September rain, easing now, and a watery afternoon sun catching the trees across the fields in Bishop’s Wood. The wind was light and southerly, blowing up from the great city of London, where Kensington gardens were brilliant with flowers, nursemaids in starched aprons paraded their charges up and down the walks, bandsmen played stirring tunes. Carriages bowled along the Mall and fashionable ladies waved to each other and displayed the latest hats, and dashing ladies of less than perfect reputation cantered up Rotten Row in immaculate habits and made eyes at the gentlemen.

The Queen, dressed in black, still mourning the death of Prince Albert twenty-seven years ago, had secluded herself at Windsor.

And in the alleys of Whitechapel a madman disemboweled women, mutilated their faces and left their bodies grotesque and blood-drenched on the pavements—the popular press would soon call him Jack the Ripper.

Murdo hunched his shoulders and pulled his helmet a little straighter. “Just Mrs. Shaw that was killed, Inspector. And the fire seems, from what we can tell, to have started in at least four different places at once, and got a hold immediately, like the curtains had lamp oil on them.” The muscles tightened in his young face. “You might spill oil on one curtain by accident, but not in four different rooms, and all of them catch alight at the same time and no one know about it. It has to be deliberate.”

Pitt said nothing. It was because it was murder that he was standing here in the mangled garden beside this eager and resentful young constable with his fair skin soot-smudged and his eyes wide with shock and the pity of what he had seen.

“The question is,” Murdo said quietly, “was it poor Mrs. Shaw they meant to kill—or was it the doctor?”

“There are a great many things we shall have to find out,” Pitt answered grimly. “We’ll begin with the fire chief.”

“We’ve got his statement in the police station, sir. That’s about half a mile back up the road.” Murdo spoke a little stiffly, reminded of his own colleagues again.

Pitt followed him and in silence they walked. A few pale leaves fluttered along the pavement and a hansom cab rattled by. The houses were substantial. Respectable people with money lived here in considerable comfort on the west side of the road leading to the center of Highgate, with its public houses, solicitors’ offices, shops, the water works, Pond Square, and the huge, elegant cemetery spreading to the southeast. Beyond the houses were fields on both sides, green and silent.

In the police station they welcomed Pitt civilly enough, but he knew from their tired faces and the way the juniors avoided his eyes that, like Murdo, they resented the necessity of having to call him in. All the forces in the London area were short staffed and all police leaves had been canceled to draft as many men as possible into the Whitechapel district to deal with the fearful murders which were shocking all London and making headlines across Europe.

The fire chief’s report was all laid out waiting for him on the superintendent’s desk, cleared for Pitt. He was gray-haired, quietly spoken and so civil that it accentuated rather than hid his resentment. He had a clean uniform on, but his face was pinched with weariness and there were burn blisters on his hands he had not had time to treat.

Pitt thanked him, making little of it so as not to draw attention to their sudden reversal of roles, and picked up the fire report. It was written in a neat, copperplate hand. The facts were simple, and only an elaboration of what Murdo had already told him. The fire had started simultaneously in four places, the curtains of the study, the library, the dining room and the withdrawing room, and had caught hold very swiftly, as if the fabric had been soaked in fuel oil. Like most others, the house was lit by gas, and as soon as the supply pipes had been reached they had exploded. The occupants would have had little chance of escape unless they had woken in the earliest stages and left through the servants’ wing.

As it happened, Mrs. Clemency Shaw had probably been suffocated by smoke before she burned; and Dr. Stephen Shaw had been out on a medical emergency over a mile away. The servants had known nothing until the fire brigade bells had disturbed them and the firemen had set ladders at their windows to help them out.

It was nearly three o’clock and the rain had stopped when Pitt and Murdo knocked at the door of the neighbor immediately to the right of the burned house. It was opened less than a minute afterwards by the owner himself, a small man with a fine head of silver hair brushed back from his forehead in leonine waves. His expression was very earnest. There was a furrow of anxiety between his brows, and not a vestige of humor in the lines round his gentle, precise mouth.