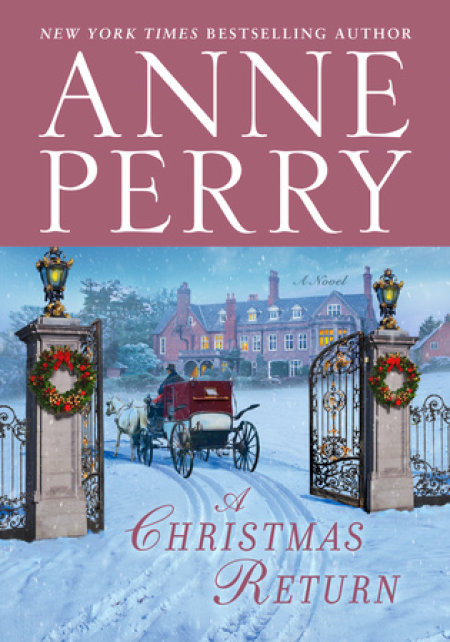 As Charlotte Pitt’s grandmother Mariah Ellison finds herself investigating a long-unsolved slaying, it becomes clear that grappling with intrigue and foul play runs in the family. A festive Christmas package left on Mariah’s doorstep contains an ominous present, sparking memories of a twenty-year-old murder that shattered her friendship with the victim’s widow. Though the gift is a bitter reminder of that tragic time, in the spirit of the season Mariah travels to Surrey in hopes of reconciling with her estranged friend and solving the crime that drove them apart.

On arrival, Mariah joins forces with the murdered man’s grandson, a sleuth in his own right who’s discovered promising evidence as well as a suspect. But Surrey’s picturesque hills conceal dark doings and shocking revelations that could make the holiday anything but calm and bright.

Decked with intrigue and trimmed with Yuletide spirit, A Christmas Return is a holiday treat wrapped in the glorious storytelling talents of the reigning master of Victorian mystery.

Praise for A Christmas Return

“This compact little gem, [Anne] Perry’s fifteenth Christmas novella, demonstrates her proficiency in writing Victorian-set mysteries. . . . The atmosphere of close-knit village life in the 1890s feels pitch-perfect, from the homeliness of residents’ holiday decor to the gossip that spreads like a dreadful stain. The characterization is superb, and the work’s short length is perfect for the material. The spirit of the Christmas season is cleverly evoked through the underlying theme that it’s never too late for reconciliations and second chances.”—Historical Novels Review (Editors’ Choice)

“Perry’s many fans will enjoy another winning Victorian-era mystery set during the holidays.”—Library Journal

“Exceptional . . . Perry unobtrusively incorporates insights about the true meaning of the season into the engrossing plot.”—Publishers Weekly (starred review) 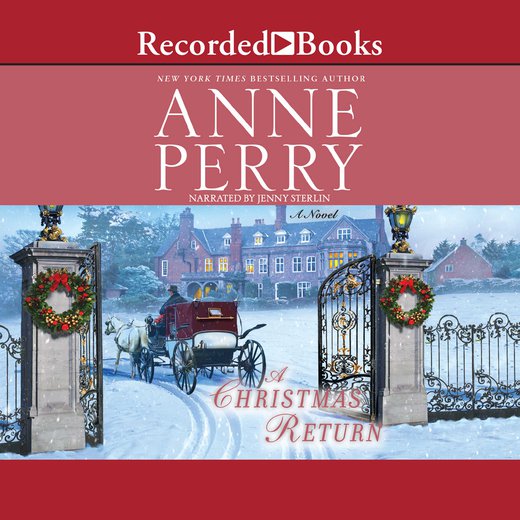 Christmas was just over a week away. Should Mariah Ellison bother the servants to put up some decorations in her rooms? No one else would see them, unless somebody paid her a call out of a sense of duty. Everybody in the family seemed to be away this Christmas, and Mariah was destined to be alone again. She forced from her mind the thought that it might be largely her own fault. She had been, to put it as kindly as possible, a trifle difficult. She had no doubt that, behind her back, it was put in harsher words.

Mariah had left her recent change of heart for rather late in life. She refused to count years, and had done for some time. In fact, she had stopped rather before eighty. That was more than old enough for any woman. If she had had any sense, she would have stopped at seventy! She knew many women who had. Queen Victoria was in her seventies, but then she could hardly be discreet about that! In fact, being Queen of a quarter of the world gave her very little discretion about anything at all, something for which Mariah did not envy her.

Being no one of any note allowed Mariah all the discretion she could wish for, and more.

She stood up and walked to the outer door of her rooms, and all the way to the front hallway of the main house. It was very grand, very beautiful. It belonged to her younger granddaughter, Emily, who had married extraordinarily well with her first husband, in fact above herself, in Mariah’s opinion. But to be fair, Emily had made Mariah reasonably welcome, and she lacked nothing in the way of comfort. Since last Christmas, and her unusual adventure in Romney Marsh, when she had been obliged to stay with her daughter-­in-­law, Caroline, and Caroline’s new husband, Mariah had appreciated a lot of things more than she had done in the past.

Emily had good taste, and since her first husband had died and left her rich, she had the means to exercise it. Mariah had always been satisfactorily cared for, but not on this scale.

The floor was pale marble, but a warm color, richly veined. The broad staircase swept down from an upper balcony, its wooden banister polished to a sheen, its newel post a work of art. Three blazing chandeliers hung from the high ceiling. The walls were decorated with paintings of aristocrats from earlier centuries. In Mariah’s opinion it was a good place to put them, far better than in one of the rooms where people actually spent time, and would be obliged to look at them.

Although the family was away, there was still a good deal of decoration around: holly with bright berries, red and gold ribbons, colored candles, and in the corner of the hall a beautifully decorated Christmas tree.

She was admiring the charming details when there was a quiet cough behind her.

She turned to see the butler standing a few yards away.

“Excuse me, ma’am, but there is rather a large parcel for you. Or rather, medium-­sized, but extremely heavy. Would you care for me to carry it to your rooms?” he offered.

“Thank you,” she accepted. Usually she carried a stick to assist her in walking. She had done so for years. It was not really necessary, but it was useful at times. It felt like a weapon, more of an attitude than any real service. She was perfectly steady on her feet, but it was good for leaning on now and then, and certainly for poking things, or people. The implication that she needed assistance made Emily’s servants more attentive toward her.

The butler picked up the parcel, which seemed to require some effort. He carried it carefully across the hall toward the door to Mariah’s quarters.

She had hoped there might be a letter for her, or better still, a Christmas card, but her disappointment was almost swallowed up by her curiosity as to what this heavy parcel might contain.

She walked behind him, out of the hall and along the passage to her own sitting room, where he set the parcel down on the table.

“Would you care for me to open it, Mrs. Ellison?” he asked. It did look particularly well sealed and was tied with several rounds of string.

“Yes, please.” Her hands were a little arthritic; she was bound to be far slower than he, and by now she could hardly wait to know what was inside all this paper and string.

The butler produced a small penknife from his pocket and opened it to cut through the string, then the paper.

She watched him with fascination. There seemed to be layers and layers of strong, brown paper around whatever it was. But finally the last layer was undone and they both stood staring at a round, dark brown Christmas pudding. It was ordinary, totally traditional, with a flattened leaf of holly on the top. She could smell the richness of it, now that the wrapping was off.

“Very nice, ma’am,” the butler said, looking at the pudding, then up at her. “I’m just surprised at how heavy it felt. Would you like me to take it to the kitchen, ma’am? You’ll be wanting to keep it until the day.”

She frowned. Who on earth would send her a Christmas pudding? There must be a note somewhere. She stepped forward to lift the pudding.

“Good gracious!” she exclaimed. “It feels like lead. What on earth have they put in it?”

Curiosity overwhelmed her. She went to the sideboard drawer and took out a knife. She poked the pudding and, within an inch or less, met with total resistance.

“May I help, Mrs. Ellison?” the butler offered.

She did not need a butler’s help to cut a Christmas pudding. She jabbed the knife hard and achieved nothing at all. Whatever was blocking it was absolutely solid.

Very gently he took the knife from her and tried his own hand at it. He also got no farther than the first inch. He stopped, uncertain what he should do.

Mariah reached out, took the knife from him, and determinedly cut a couple of inches away from the original place. She met with the same resistance, and started to knock the pudding off, away from whatever the obstruction was.

The butler stared in amazement as she slowly uncovered a totally spherical ball of lead, about seven or eight inches in diameter.

“What on earth is that?” he asked.

Mariah felt a sudden chill of memory, indistinct, just sadness, and fear. It was absurd.

“It looks like a cannonball,” she said a little tartly. “Except it is too small to be a real one.” She poked at it again, and then pushed to see if it would roll. It was solid, and too heavy to do more without a considerable effort behind the push.

“Is it one of those ornamental ones?” the servant asked, staring at it, his face creased with puzzlement.

Inside her mind the memory was suddenly complete. That is exactly what it was: an ornamental cannonball, made of lead just as the real ones were. No wonder it was extraordinarily heavy. She stared at it as if mesmerized, while waves of the past engulfed her like a cold sea.

“Are you all right, Mrs. Ellison?” he said with concern. “Would you like to sit down? I’ll take this away and fetch you a cup of tea.”

“No!” she said quickly. Then, remembering the new person she had determined to be, she added, “Thank you. You might look to see if there is any note with it, even on the outside wrapping. I believe I know where it came from, but I would like to be certain.”

“Yes, of course, ma’am.” Obediently he picked up all the pieces of paper and examined them on both sides, putting them in a neat pile when he had finished. He kept one in his hands.

“Well, don’t stand here!” Her voice was tight in her throat. “What does it say?”

“It’s just the postmark of where it’s from, ma’am. There’s no more.”

She gulped. Her throat was dry. It was twenty years ago now, almost exactly.

His eyes widened. “Yes, ma’am, that’s exactly what it says.”

“Thank you. You . . .” She looked at his pale face, so stiff, so earnest. “You may take it to the kitchen. Perhaps you would have someone remove the bit of pudding from the outside. If it is edible, you are welcome to it. And have the cannonball put in the garden shed, if you please.”

“Yes, ma’am. Will there be anything more?”