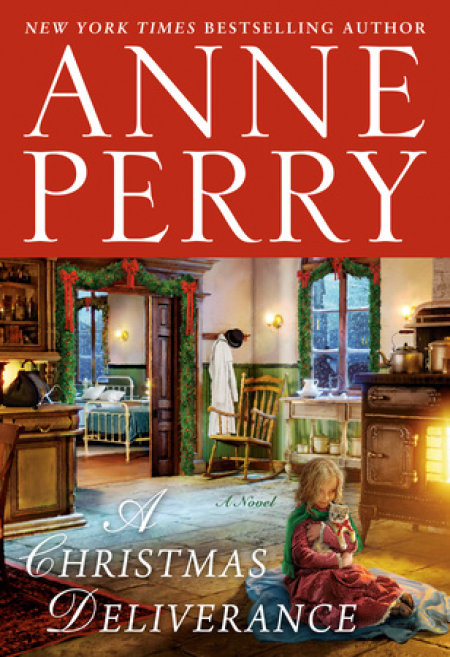 A courageous doctor and his apprentice fight to save London’s poor—and discover that the hearts of men can be colder than a winter chill—in this gripping holiday mystery from New York Times bestselling author Anne Perry.

Scuff has come a long way from his time as a penniless orphan scraping together a living on the banks of the Thames. Now he’s studying medicine at a free clinic run by Dr. Crowe, a thoughtful if stoic mentor. But lately Crowe has been distracted, having witnessed an altercation between a wealthy former patient of his
named Ellie—a woman he not only treated but developed unacknowledged feelings for—and her controlling fiancé. It seems that someone is forcing Ellie to marry the man. When Crowe’s emotions come flooding back, he sets out to uncover the troubling connections between Ellie, her father, and her betrothed.

With Crowe engrossed in his investigation just weeks before the holidays, Scuff is left to run the clinic on his own, treating London’s poor and vulnerable. In the holiday spirit, he offers Mattie, a young girl in need, a warm place to stay as the winter chill sweeps through the
city. Together, Scuff and Mattie must also fend off the police, who are growing suspicious of Crowe’s amateur sleuthing. Will Crowe be able to help Ellie, and will Scuff be able to ensure that he and Mattie—and all of their patients—have a safe and peaceful Christmas? 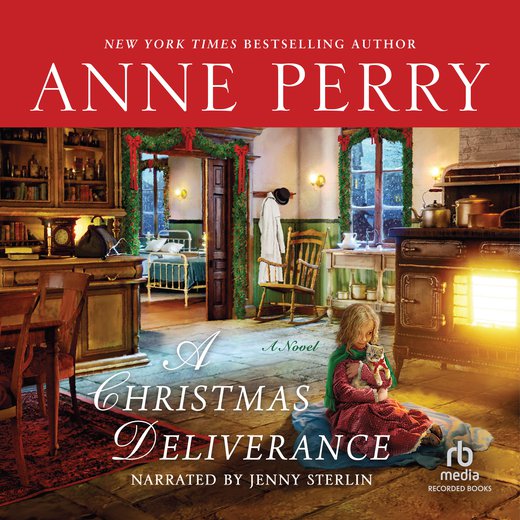 “Are you going to stitch it?” she asked nervously, holding out a small, bloody finger.

Crowe guessed she was about four or five years old, and her eyes brimmed with tears that she was trying very hard to hide.

The finger was bleeding quite heavily. It would need stitches to hold it, and bandages to keep it clean as long as possible. This would be difficult with the cold and wet weather on the banks of the Thames, and even more so for a child with probably only a makeshift shelter to live in, and very little to eat. She had come to the clinic alone. She might have a parent, but probably not.

Most of the poorer people living on the riverbanks knew of Crowe’s clinic, which catered specifically to their needs. He had opened it several years ago, after he had become skilled in healing, before he had officially qualified to call himself a doctor, or indeed to practice medicine at all.

Crowe never charged these people for his services. But they had no money anyway.

Not much had changed in the years since he had opened the clinic, except that he was now officially qualified. And he had gained the confidence to face authority and stand his ground. Occasionally now, on rare occurrences, someone could pay and Crowe would have enough for supplies . . . other than food.

“Are you going to stitch it?” she asked again.

He examined the finger. “Yes, I am,” he replied.

She sniffed. “Can you darn it where the hole is?” she asked hopefully.

Crowe thought perhaps she had seen her mother, or her grandmother, darning the holes in a sock. “Not exactly,” he replied. It was always better to tell the truth. When he saw how her eyes grew wide, he added, “I’ll stitch it closed, and then you have to keep it covered and dry. It will fill in itself. You can do that.” It was more hope than belief.

“Now, hold still, and be very brave,” he instructed. “Perhaps you don’t want to watch. You don’t have to.”

She blinked and a tear ran down her cheek. She nodded, then watched as he cleansed the wound, and then chose a needle from the small case and threaded it with very fine gut, almost like a hair. He had to keep his attention on what he was doing, so he was sure to catch the blood vessel, as well as the broken skin. He must leave her with only a slight scar, not puckered in a way that would always be uncomfortable.

She flinched as the needle pricked her, but she did not pull away.

Crowe worked as quickly as he could, only now and then looking up at her for a second or two. He knew he was hurting her. Fingertips were intensely sensitive, but there was nothing else he could do. The wound had to be given the chance to heal. If it became infected, she was too small, and perhaps too malnourished, to fight the infection off.

After the last suture was in place, Crowe trimmed away the excess thread and cleaned around the wound. Then he went straight on to bandage it, heavily. He reminded her not to take off the outer layers, even if they became soiled. “To protect it,” he explained. “And now,” he added, “I’m going to have lunch. Would you like some, too?” He knew she was probably hungry most of the time.

“I haven’t any money,” she said in little more than a whisper, as if frightened that he would be angry.

He smiled and gave a shrug. “Neither have I, as it happens. So . . . will you have lunch with me? It’s vegetable soup, with potatoes in it.”

She gave the smallest nod, barely a movement at all.

“Come on, then. Can you eat with your left hand?” It was the right one that had been injured.

He led the way out of the room in which he and his assistant, twenty-two-year-old Will Monk, more often known as Scuff, saw their patients.

Scuff, too, had begun as an orphan, when he was a little older than this child. Actually, he didn’t know his birth date, or how old he was. He had spent his early childhood, after his mother had married his stepfather, scraping out a living as a mudlark, one of the small boys who salvaged items from the riverbanks when the tide was out: coins, metal screws, pieces of coal, anything that could be sold. Scuff had been befriended by William Monk, of the Thames River Police, and later officially adopted by Monk and his wife, Hester. In addition to not knowing his birth date or age, Scuff also had no idea what his given name was. But he did now: he was Will Monk.

Crowe still thought of him, and spoke to him, as Scuff.

Crowe led the little girl into the kitchen. Only Crowe and Scuff actually lived in the clinic, but very often patients who had been operated on remained here until they were sufficiently recovered to leave. There were quite a lot of food and medicines locked away. Some of the food was simple, like oatmeal, and there was always good red wine, particularly claret, something that restored strength and spirit in people not able to eat. And, to some degree, it dulled the patients’ fear and pain. That, of course, was locked away. Things that did not keep, like bone broth, were consumed quickly.

There was also a very large stove, to provide lots of hot water necessary to launder stained sheets, or even blankets.

Crowe pulled the pan forward from the back of the stove. It was filled with a thick soup. It had been bone broth originally, but all kinds of things had been added, mainly cabbage stalks and potatoes, until it had become a meal in itself. He ladled out a serving for the child, and another for himself, then he placed the bowls on the table and indicated Scuff’s chair for the little girl.

He looked closely at her. He watched carefully and saw that she looked mystified.

Crowe dipped his spoon into his bowl and then tasted carefully. It was a little hot, so he blew on it gently, then put it in his mouth, all the time watching her.

She copied exactly what he did, even down to blowing on the spoon, then carefully putting it into her mouth. Although it was a little too hot, she refused to show it.

Spoonful by spoonful, they finished everything in the pot. Crowe was more than full, but the child had eaten as if her legs were hollow.

They were just finishing when the next patient came in. He was a middle-aged man with a large, angry boil on his neck.

“Can you do anything about this, Doc?” he asked. “I got nobody else I trust to do it, an’ I can’t reach it myself.”

“Certainly,” Crowe responded, looking at the protruding, swollen mass. He could almost feel the throb of it and imagine the pain.

The child was transfixed.

“Can you help me?” Crowe asked her.

She nodded, as if too horror-struck at the idea to find words.

He directed the man to sit on one of the chairs, and then he spread a large piece of toweling around his shoulders, tightening his grip on the man’s upper arm for a moment, to offer reassurance.

“Right,” he said with confidence.

He had never asked the girl’s name, so he had to get her attention by looking at her. “Will you pass me the blue cloth? Do you know blue?”

She looked puzzled, and then seemed to be ashamed.

“It’s the color of the sky when it’s sunny,” he explained.

She passed him the right one.

“Thank you.” He took it, rinsing it out in the bowl of warm water, and washing the angry boil. Then he gave it back to her. She put it down where it had been.

She had no trouble with that.

In a single movement, he cut the angry flesh and released the pus inside. Then he took the largest cloth and mopped it up. After this, he removed the remnant of the angry, bloody, and purulent mess and dumped it into the bin. He would burn the contents afterward.

“What’s your name?” he asked the little girl.

She stared at him.

“I’ve got to call you something,” he explained.

She looked puzzled, and then, again, embarrassed.

“Then I’ll give you a name. There was a Queen Matilda once, a long time ago. How about Mattie?”

“Right, Mattie, will you please pass me the cleanest piece of cloth on the table?”

She looked at all three pieces, and passed him the best one, looking at him shyly.

He took it and pressed it against the wound, where the boil had been, then applied two pieces of sticking plaster to hold the cloth in place.

“Is that all?” the man demanded dubiously.

“The dressing might need changing tomorrow. Don’t use a cloth that hasn’t been boiled clean,” Crowe instructed.

He saw how Mattie looked at him. “What?” he asked.

She glanced away, thinking, and looked up at him only when she had found the words. “Mine, too?” she said tentatively. “Can I come back and have you do it?”