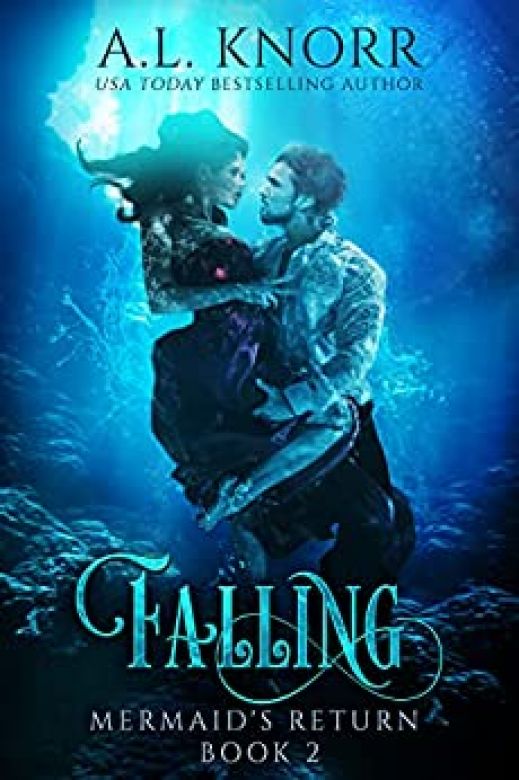 Things are progressing with Mira and Nathan's relationship, although not nearly as quickly as Mira would like. If it were up to her, they'd be well on their way to making a family by now. But Nathan's traditional ways means Mira has to hold herself back. Not an easy ask for a siren.

Just as Mira's life seems to be heading in the right direction, her estranged father makes an unexpected appearance. When past events that should have been erased from his memory begin to surface, driving him mad, everything Mira believed about the powers of a siren's voice is thrown into doubt.

How will she cope when a member of her own family becomes the enemy?

The Returning duology are companion novels to The Elemental Origins Series, a teen fantasy adventure by a USA Today Bestselling author.

SPOILER ALERT: Sample may contain spoilers if you have not read Returning

The lunch rush was over and the Sea Dog was empty of customers except for one young couple. A stroller was parked next to their table, the parents peering into it with dreamy expressions from time to time. They held hands over the table, and the man stroked the back of the woman's hand with his thumb. Lunch had been manic, and yet these two paid the world around them no mind. It was as if they were happily trapped in their love bubble.

"Why don't you just go over there and ask if you can see her?" Crystal had just emerged from the kitchen with a tray of recently filled salt and pepper shakers. "You've been watching them for an hour, Mir. You should have served them, instead of me."

"They wouldn't mind?" I dried my hands with a bar towel and threw it over my shoulder. I had little to no experience with babies—all I knew was that they did something intense to my heart and I couldn't stop dreaming about the day I'd have one of my own.

"Course not. They're nice. Besides, parents always think their babies are the cutest and most lovable." She set the tray down and gave me a nudge. "They'll love that you're just as gobsmacked over her as they are."

It didn't come naturally to me to approach strangers, but the curiosity to see the baby inside that stroller was over‐ powering.

The couple didn't look up until I was almost on top of them. "Hello," I said, and realized my fingers were strangling each other. I dropped my hands.

"Hi!" The mother looked up. "Sorry, we'll pay and get out of your way." She stood and began pulling on her parka.

"No, that's fine," I said. "I'm not rushing you. I was just wondering if I might have a peek?" I gestured to the stroller. My heart pounded and I felt awkward. I hoped Crystal was right.

"Oh, of course!" she said, and smiled knowingly at her husband. She drew back the blanket.

My anxiety vaporized when I saw her. "Ohhhh," I breathed. My heart pooled into a warm liquid of want. The infant was tiny and sleeping and perfect. Only her face was visible, her head capped in a white knit hat. "How old?"

"Twenty-seven days," said the father. "This is our first time out of the house with her. We're incredibly lucky— she's an angel." He pulled on his jacket and zipped it up. "We know it’s cold weather, but we just had to get out."

The mother pulled on her hat. "You want a baby one day?"

"As soon as possible," I said seriously, and they both laughed.

"It's the coolest thing I've ever done," she said. "But you're young. Live a little first. That's what I'd suggest. Once you're a parent, you're a parent for life. And do it with the right guy." She gave her husband a mushy smile. She covered the sleeping infant and her partner pulled out his wallet and fished for cash to pay for their lunch.

I felt like I had lived plenty, although a lot of it had been underwater. At twenty, I had only spent a single year more on land than I had at sea. I had all the exposure to salt that was needed to trigger my land-cycle, and land-cycle meant a baby.

"Satisfied?" Crystal raised an eyebrow as I returned to the bar with the couple’s dirty dishes.

"Yeah. Cute and messy and smelly and loud."

"Ugh, no thanks." She followed me into the kitchen where Phil was cleaning the stove. "They're like little drunk people. They poop their pants, throw up on themselves, can't walk, and break stuff."

"Who pooped their pants?" Phil looked up, startled.

"Babies. Babies poop their pants. Multiple times a day. And yet, Mira here wants one so bad she can barely see straight."

I laughed while I tucked the dirty dishes into the dishwasher.

"That's nice," said Phil. "You and Nathan would have cute kids. What's stopping you?"

"Tradition," Crystal and I said at the same time.

She dimpled at me. She had dated Nathan before I had, so she knew he was as old-school as they come. She was with Nathan when she figured out that she was more attracted to women than to men.

"Nathan is so old-fashioned,” Crystal said, “he should wear eighteenth century garb and drive a carriage to work, instead of a Tundra."

"So. Get married," Phil suggested. "Why wait if it’s what you both want?"

My sentiments exactly. I felt like I'd been waiting for Nathan since the day I'd met him. I'd been warned by my mother that human love needed time to grow. The stages of a true and authentic love had been studied by psychologists and there were important steps to take if you wanted a really strong foundation. I had taken a book out of the library on the subject, just to make sure Nathan and I weren't going to miss any steps. For me, waiting for real love was a kind of torture. For my future child, if female, that connection would make her powerful beyond imagination. It was the kind of gift my mother wasn't able to give me because she'd had to use her siren voice on my father. I didn't know what had happened, she'd never told me, but I wasn't about to screw up my child's chances at having the best a siren could have. So...Nathan and I were taking it slow. Very slow. Agonizingly slow.

"But Nathan is," said Crystal, sliding her butt up onto the stainless-steel countertop.

Phil gave her a look and she hopped down again.

"What has it been, four months?" Phil asked, drying off the gleaming stove.

"Five," I said. Five months of going on dates, kissing, cuddling, talking, falling in love. I was so ready to move on to the next step that I could barely focus anymore, but I didn't say anything to Nathan. I let him dictate our speed. After all, he was the human, not me.

"Well, you guys will know when is the right time," said Phil, patting my upper arm.

For me, the right time was the day I first heard Nathan's voice. But for him? Who knew.