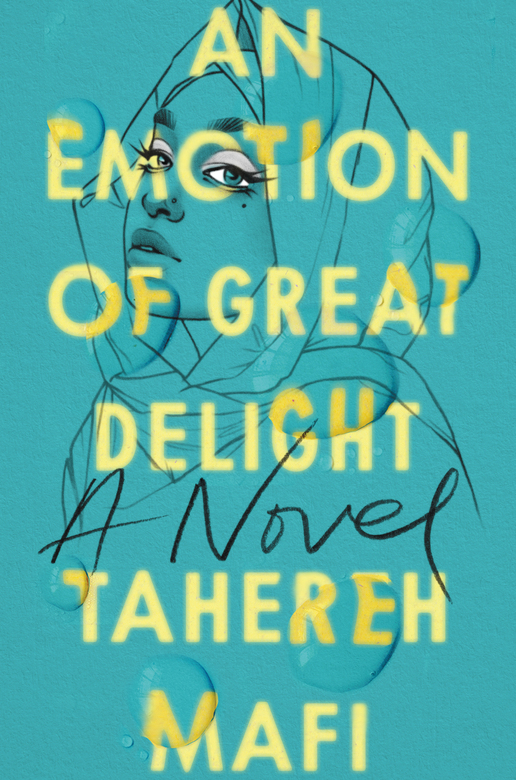 An Emotion of Great Delight has descriptive copy which is not yet available from the Publisher.

The sunlight was heavy today, fingers of heat forming sweaty hands that braced my face, dared me to flinch. I was stone, still as I stared up into the eye of an unblinking sun, hoping to be blinded. I loved it, loved the blistering heat, loved the way it seared my lips.

It felt good to be touched.

It was a perfect summer day out of place in the fall, the stagnant heat disturbed only by a brief, fragrant breeze I couldn’t source. A dog barked; I pitied it. Airplanes droned overhead, and I envied them. Cars rushed by and I heard only their engines, filthy metal bodies leaving their excrement behind and yet—

Deep, I took a deep breath and held it, the smell of diesel in my lungs, on my tongue. It tasted like memory, of movement. Of a promise to go somewhere, I released the breath, anywhere.

I, I was going nowhere.

There was nothing to smile about and still I smiled, the tremble in my lips an almost certain indication of oncoming hysteria. I was comfortably blind now, the sun having burned so deeply into my

retinas that I saw little more than glowing orbs, shimmering darkness. I laid backward on dusty asphalt, so hot it stuck to my skin.

I pictured my father again.

His gleaming head, two tufts of dark hair perched atop his ears like poorly placed headphones. His reassuring smile that everything would be fine. The dizzying glare of fluorescent lights.

My father was nearly dead again, but all I could think about was how if he died I didn’t know how long I’d have to spend pretending to be sad about it. Or worse, so much worse: how if he died I might not have to pretend to be sad about it. I swallowed back a sudden, unwelcome knot of emotion in my throat. I felt the telltale burn of tears and squeezed my eyes shut, willing myself to get up. Stand up.

When I opened my eyes again a ten-thousand-foot-tall police officer was looming over me. Babble on his walkie-talkie. Heavy boots, a metallic swish of something as he adjusted his weight.

I blinked and backed up, crab-like, and evolved from legless snake to upright human, startled and confused.

“This yours?” he said, holding up a dingy, pale blue backpack.

He dropped the bag as I touched it, and the weight of it nearly toppled me forward. I’d ditched the bloated carcass for a reason. Among other things, it contained four massive textbooks, three binders, three notebooks, and two worn paperbacks I still had to read for English. The after-school pickup was near a patch

of grass I too-optimistically frequented, too often hoping someone in my family would remember I existed and spare me the walk home. Today, no such luck. I’d abandoned the bag and the grass for the empty parking lot.

Up, up a cloven chin and thin lips, nose and sparse lashes, flashes of bright blue eyes. The officer wore a hat. I could not see his hair.

“Got a call,” he said, still peering at me. “You go to school here?” A crow swooped low and cawed, minding my business.

He tilted his head at me. “What were you doing on the ground?”

“Were you praying or something?”

My racing heart began to slow. Sink. I was not devoid of a brain, two eyes, the ability to read the news, a room, this man stripping my face for parts. I knew anger, but fear and I were better acquainted.

The officer didn’t seem to buy this. His eyes traveled over my face again, at the scarf I wore around my head. “Aren’t you hot in that thing?”

He almost smiled. Instead he turned away, scanned the empty parking lot. “Where are your parents?”

A single eyebrow went up.

“They forget about me,” I said.

Both eyebrows. “They forget about you?”

“I always hope someone will show up,” I explained. “If not, I walk home.”

The officer looked at me for a long time. Finally, he sighed.

“All right.” He backhanded the sky. “All right, get going. But don’t do this again,” he said sharply. “This is public property. Do your prayers at home.”

But he was already walking away.

It took a full three minutes for the fire in my bones to die out.

In the increasing quiet, I looked up. The once-white clouds had grown fat and gray; the gentle breeze was now a chilling gust. The drunk December day had sobered with a suddenness that bordered on extreme and I frowned at the scene, at its burnt edges, at the crow still circling above my head, its caw caw a constant refrain. Thunder roared, suddenly, in the distance.

The officer was mostly memory now.

What was left of him was marching off into the fading light, his boots heavy, his gait uneven; I watched him smile as he murmured into his radio. Lightning tore the sky in two and I shivered, jerkily, as if electrocuted.

I did not have an umbrella.

I reached under my shirt and tugged free the folded newspaper from where I’d stashed it in my waistband, flush against my torso, and tucked it under my arm. The air was heavy with the promise of a

storm, the wind shuddering through the trees. I didn’t really think a newspaper would hold up against the rain, but it was all I had.

These days, it was what I always had.

There was a newspaper vending machine around the corner from my house, and a few months ago, on a whim, I’d purchased a copy of the New York Times. I’d been curious about Adults Reading the Newspaper, curious about the articles therein that sparked the conversations that seemed to be shaping my life, my identity, the bombing of my friends’ families in the Middle East. After two years of panic and mourning post-9/11, our country had decided on aggressive political action: we had declared war on Iraq.

The coverage was relentless.

The television offered a glaring, violent dissemination of information on the subject, the kind I could seldom stomach. But the slow, quiet business of reading a newspaper suited me. Even better, it filled the holes in my free time.

I’d started shoving quarters in my pocket every day, purchasing copies of the newspaper on my way to school. I perused the articles as I walked the single mile, the exercise of mind and body elevating my blood pressure to dangerous heights. By the time I reached first period I’d lost both my appetite and my focus. I was growing sick on the news, sick of it, heedlessly gorging myself on the pain, searching in vain for an antidote in the poison. Even now my thumb moved slowly over the worn ink of old stories, back and forth, caressing my addiction.

I stared up at the sky.

The lone crow overhead would not cease its staring, the weight of its presence seeming to depress the air from my lungs. I forced myself to move, to shutter the windows in my mind as I went. Silence was too welcoming of unwanted thoughts; I listened instead to the sounds of passing cars, to the wind sharpening against their metal bodies. There were two people in particular I did not want to think about. Neither did I want to think about looming college applications, the police officer, or the newspaper still clenched in my fist, and yet—

I stopped, unfurled the paper, smoothed its corners.

Afghan Villagers Torn by Grief After US Raid Kills 9 Children

I retrieved it from my pocket, going still as I scanned the flashing number on the screen. A blade of feeling impaled me—and then, just as suddenly, withdrew. Different number. Heady relief nearly prompted me to laugh, the sensation held at bay only by the dull ache in my chest. It felt as if actual steel had been buried between my lungs.

I flipped open the phone.

A voice finally broke through, a mere half word emerging from a mess of static. I glanced at the screen, at my dying battery, my single bar of reception. When I flipped the phone shut, a prickle of fear moved down my spine.

I thought of my mother.

My mother, my optimistic mother who thought that if she locked herself in her closet I wouldn’t hear her sobs.

A single, fat drop of water landed on my head.

A second drop of rain fell in my eye.

The sky ruptured with a sudden crack and in the intervening second—in the heartbeat before the deluge—I contemplated stillness. I considered lying down in the middle of the road, lying there forever.

It arrived in a hurry, battering my face, blackening my clothes, pooling in the folds of my backpack. The newspaper I lifted over my head endured all of four seconds before succumbing to the wet, and I hastily tucked it away, this time in my bag. I squinted into the downpour, readjusted the demon on my back, and pulled my thin jacket more tightly around my body.