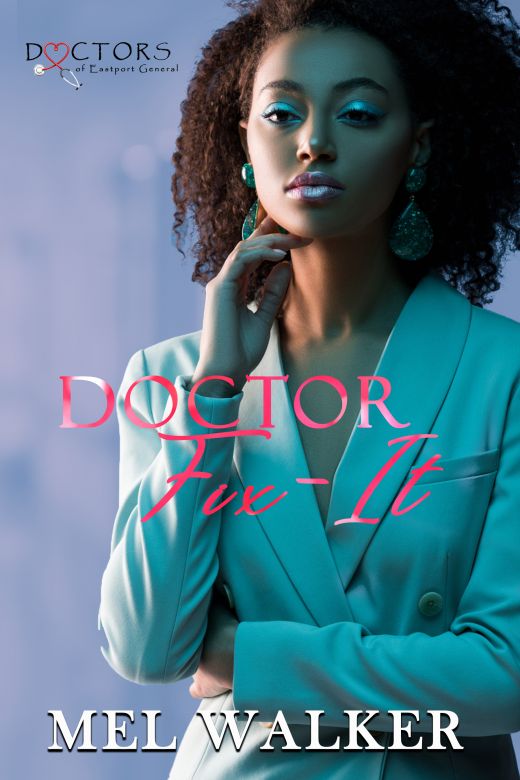 Rules exist to keep us from following the impulses of our heart.

Angie has learned the hard way that breaking rules come at a cost. This is why she has maintains a strict line separating her personal life from her professional one. A line she’s had no issues maintaining until she crosses paths with him. He’s the mysterious stranger with the bedroom eyes and the ability to have her consider things she thought were unattainable. A fun filled evening opens up a world of possibilities until he unexpectedly appears at her hospital.

When her personal life collides with her professional one, Angie is placed at a crossroad. Will she risk everything she’s worked hard to achieve professionally for a chance at love? Will she break not only her rule but the number one rule for a doctor – Never date a patient.

Doctor Fix-it is a standalone Medical Romance that is part of the interconnected Doctors of Eastport General Hospital Series. Each novel may be read as standalone.

Daddy would not approve.

The silly line causes me to giggle into my vodka tonic, the same mix I’ve just sent to a stranger sitting alone on the other side of the hotel bar. I raise a questioning brow at Eddie, the bartender, who knows my routine. Once a month, I drop all my inhibitions and let off a bit of steam at the one bar in Eastport, Rhode Island, I know I won’t run into any of my hospital colleagues.

Eddie saunters over, his sleeves rolled up to his elbow, showcasing his dangerous tattoos. The ones that are a conversation starter for the shy female business travelers that frequent this hotel bar. Since I’m not a traveler, I’m immune to his spell.

Eddie leans over the counter, his green eyes sparkling in my direction, and I tip forward. “Sorry for the slim pickings tonight, Angie,” he states with a devilish smile. He winks at the attractive blonde sitting two stools over from me. A shared smile, letting her know he’s all hers in a minute. “There’s a kiddie doll conference this week, hence the lack of testosterone tonight.”

He may be apologizing to me, but his smirk tells me he’s loving the switch-up. Eddie has made more cosmos, margaritas, and mojitos tonight than I’ve seen in the two-plus years I’ve been coming here. The bar is normally filled with traveling businessmen. Not tonight. The ratio is reversed, eighty percent women.

I run a finger across the rim of my drink. I don’t care about the odds. I lift my glass and tip it toward the tall, dark stranger, who holds up my gift to him. A single brow raises as he takes a tentative sip. His gaze locks with mine, and I match his movement. The warmth of the alcohol spreads in my chest. I lower my drink, lips parting as a soft sigh escapes my lips. The stranger mirrors my movement, and the corners of his eyes crinkle in delight.

“All it takes is one. We good?” I whisper to Eddie while my gaze remains on the amused stranger.

A soft chuckle escapes Eddie’s lips before he whips the bar rag off his shoulder and wipes in front of me, pulling my attention to him. “Yeah. He opened a tab. He’s staying in the hotel. Don’t know his story, but I got his info. You’re good.”

“Wish me luck,” I joke and quirk my neck for the stranger to join me.

“Luck has nothing to do with what you are about to do,” Eddie teases and strides toward the blonde woman.

I twist on the stool and uncross and cross my legs, my short black dress riding up my thigh. The movement serves its purpose, causing the approaching stranger to slow his steps and give me an opportunity to appreciate the view.

The man is tall, at least six feet, African American like me, his skin two shades darker than my sandy brown. Short Afro, thin mustache, strong jaw, and magnetic dark eyes unapologetically locked onto my legs. It’s a look that only comes with experience, which lowers any anxiety I may feel. I made the mistake of picking up a twentysomething kid once. He never got the memo of how these things are supposed to work. It took nearly two months to pry his clingy hands away. Now I only target men closer to my age, midthirties, old enough to know better but and smart enough not to care.

They, like me, understand the rules. Lonely doesn’t always mean alone.

“You must be one of the models for the dolls at the conference. Tell me the name and I’ll order a case right now.” The timbre of his voice is intense, the deep melody causing vibrations in my chest I hadn’t expected.

“If you tell me you play with dolls for a living, I’m turning and walking away,” I tease, not really.

He steps into my personal space with confidence I find attractive. “Only living, breathing dolls such as yourself. I’m Brayton—thank you for the drink. I can’t recall the last time a woman sent one my way.” His hand envelops mine, nearly swallowing it. Strong eye contact, a slightly sexy smirk on his lips. This close, I take in his stormy dark eyes, the ones that are assessing my every move. This is not his first rodeo. Good. I won’t have to explain the rules to him.

I glance over his shoulder as he slips onto the barstool next to mine. “Figured I’d make the move before someone else beat me to it. I’m sure you’ve noticed…” I sweep a hand across the bar. “The odds certainly aren’t in my favor tonight.” I tease.

His gaze doesn’t deviate from me for one second. It’s a piercing, comforting gaze, a look of contentment on his handsome face. I feel the drumbeat in my chest. This man could prove dangerous to me and my rule. He takes his time, lets the sexual tension between us percolate before delivering his line with a certainty most men lack. “There is no competition for someone like you…”

“Angie.” My real name slips out without a thought. This man is already chipping away at my rules. Never give them your real name. And thanks to mister twentysomething, never give them your phone number. “If you’re not here for the doll conference, what brings you to our beautiful little town?”

A spark of joy flashed across his face, and I wonder what I said to elicit such a response. “Our?” He lets the word hang in the air, his lip ticking up into a dangerous smile. “So, I take it you live here?”

I turn to hide in my drink. He’s gotten more information out of me in a few heartbeats than I usually give after a few hours with a stranger. What kind of spell are you weaving, Brayton?

“Something like that.” I take a long sip and ignore the movement next to me until I hear the familiar voice.

“How’s everyone doing here?” Eddie directs the question at Brayton, but his gaze locks on me.

I give him a soft smile and nod. “As good as possible, thanks,” I whisper, pleased that in the whirlwind of Brayton, I am able to recite the code phrase Eddie devised for me.

The plastic in his smile melts to reveal a genuine Eddie grin. “I’ll be around if you need anything,” he says and works his way down the bar.

“You and the bartender?”

I turn to face Brayton with a furrowed brow. Curiosity and not attitude accompanies his question. I add perceptive to the list of traits he possesses, the list growing by the minute.

“Just a friend. We look out for each other.” Another truth slips out, and I decide to stop fighting whatever it is that has my heart beating like a schoolgirl’s.

I won’t back down. I’m not that woman. “I think we both know, and something tells me you are looking for the same thing.” I capture his gaze and hold it tight like a pair of lucky dice at the casino. I skip over the list of questions in my playbook, skipping ahead to the one deal breaker, the one rule I’ve never broken and never will. “Are you married or in a serious relationship?” I hold his gaze and pray I’m as perceptive as him. I search for the hesitation, I search for the deceit, and all I find is a pair of dark eyes that carry with them a warmth that matches what I feel in my chest.

“Someone did that to me once.” He reveals his truth, starting mid-story. I nod with familiarity. We are two broken souls seeking reassurance. “I like games, but I would never play that one.” He then says the two words that close the deal. “No strings.”

His last two words ring in my ears, my overstimulated mind interpreting them on more levels than I’m sure he even meant. Past, present, future.

I lean into Brayton, my lips an inch from his ear. My tongue flicks across his earlobe, and I whisper, “Close out your tab. I’ll meet you by the elevator.”

I don’t wait for a response, merely stepping away. I slow my stride, secure in the knowledge that his gaze is locked on me. Those stubborn five extra pounds that refuse to go away with age no longer bother me. I’ve discovered the secret after so many pitfalls—men are visual creatures, and I do alright in that department—but what they find irresistible is confidence. And I’m no longer the confused, heartbroken twentysomething-year-old studying sixteen hours a day through med school. I’m a grown woman who no longer waits around, hoping a man stumbles across her. I go out and get what I want.

And tonight, I want Brayton, and I don’t care that Daddy wouldn’t approve.