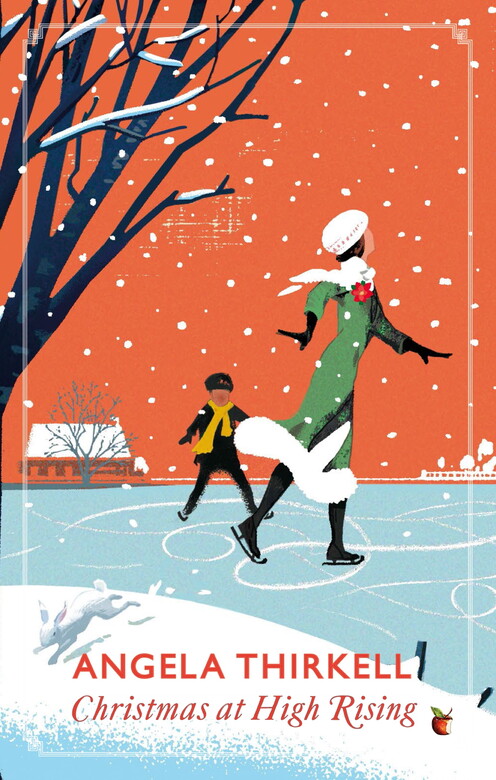 Originally published in the 1930s and 1940s and never before collected, these stories by the incomparable Angela Thirkell relate merry scenes of a trip to the pantomime, escapades on ice, a Christmas Day gone awry, and an electrifying afternoon for Laura Morland and friends at Low Rising, not to mention the chatter of the arty set at a London private view. Charming, irreverent and full of mischievous humour, they offer the utmost entertainment in any season of the year.

George Knox, the celebrated biographer, who was incapable of doing things by halves, and indeed capable only of overdoing them, suddenly felt that as a grandfather he ought to take a large family party to the theatre. In vain did his wife point out to him that his granddaughter, being barely six months old, would certainly not be allowed to come and could not appreciate it if she did, and that the rest of his family, which consisted of his married daughter Sibyl Coates and her husband Adrian, would far rather stay in warmth and comfort in his house at Low Rising where they were staying on a visit. George Knox, who had already begun to dramatise himself as Famous Author Loves to Gather Little Ones Round Him, was so dejected by her words that she had to give in, only stipulating that he should consult their neighbour, Mrs Morland, before doing anything rash.

‘Because, as far as I can see, George,’ she said, ‘Tony is the only child we can get hold of, unless you wanted to take the Vicarage girls. You had better go over to High Rising and talk to Laura about it.’

So George Knox dressed himself in a large hat and muffler as Famous Author Takes Country Walk, and went over to High Rising. Here he found Mrs Morland at tea.

‘Sit down, George, and have some tea,’ said Laura, ‘because you won’t have any peace in a few moments. Tony and Rose and Dora Gould insist on acting charades to me, which is terribly dull. Luckily, they take about ten times as long to get their scenes ready as they do to act them, so you can talk between whiles.’

George Knox gratefully accepted a cup of tea and began to develop his plan for a family pantomime party, but before Laura had even begun to have the faintest idea of what he was talking about, the door burst open, and Rose was pushed in by unseen powers whose voices could be heard whispering encouragement to her from the hall. Rose advanced diffidently to Mrs Morland and twisted herself about in embarrassment.

‘Please, Mrs Morland,’ said Rose in a painful whisper, ‘Tony says can we have Mr Knox’s hat for our next scene?’

‘You have all got hats of your own,’ said Laura. ‘Use one of them.’

‘Of course,’ said one of the unseen powers in a voice remarkably like Tony’s, ‘if we can’t have the hat it’s all absolutely no good. People don’t seem to understand that one must have proper hats to do acting properly.’

‘But, my dear Laura,’ said George Knox, ‘why this curmudgeonly attitude towards property which, after all, is not yours and for which, therefore, you need feel no responsibility? If at this festive season a hat more or less, be it mine, be it whose you will – or would it perhaps be more correct, if less euphonious, to say whose you will’s, but a truce to these idle questions – if, I say, a hat can give pleasure to man, bird, or beast, why should this pleasure be denied?’

‘Well, George,’ said Laura, ‘you can’t exactly call Tony and the girls men or birds or beasts, but if you don’t mind them having your hat, that’s your look out. All right, Rose, then you can have the hat.’

‘This will be the whole word,’ said Laura to George Knox. ‘They have done three syllables and there is no doubt that they were Core and Lie and Flower, so the whole word will be “cauliflower”, but don’t guess at once, because they will be so disappointed. I couldn’t help guessing the other syllables because Tony won’t let the girls say them and when he says them himself he says them so loud that one simply can’t help knowing, however hard one tries not to.’

The final scene of the charade exceeded Laura’s worst expectations. Rose and Dora were supposed to keep a vegetable shop and Tony to be a regular customer, though attired as he was in Rose’s coat with a little fur collar and George Knox’s hat, which was only prevented by his bat-like ears from extinguishing him entirely, he had a sinister appearance which would have made any nervous shopkeeper suspect him at once. After a long pointless conversation conducted almost entirely by Tony, who, to his mother’s horror, pretended to be drunk in a very lifelike way, he took off his hat, made a sweeping bow to the audience, and left the room.

Tony returned, full of calm confidence, and approaching the temporary counter said, ‘I happen to have forgotten another vegetable that I wanted.’

‘You can’t know what I want, because I haven’t said it,’ interrupted Tony quickly. ‘And I don’t suppose your shop has it, so it isn’t much use my asking for it. It would have been a CAULIFLOWER. That’s the end. Do you know what the word is?’

‘Is it “potato”?’ asked the weak-minded Laura.

‘I know it, my boy, I know it,’ said George Knox with eager complacency. ‘In fact, none but a moron, and such I flatter myself I am not, though I make no pretension to intellect, could have been in doubt as to the word. It was – and I shall make no bones – a phrase, Laura, as to whose provenance I am in doubt – no circumlocutions, about telling you the conclusion at which I have arrived, a conclusion which —’

‘It was a jolly good charade, sir, wasn’t it?’ said Tony with honest pride. ‘I invented it all. Rose and Dora haven’t much idea of acting, but I acted in the school play, so I know all about acting, and I trained them. They haven’t much idea of talking yet, but I can do the talking. I have a kind of gift for talking.’

‘To tell me that fact,’ said George Knox, ‘is a work of supererogation, my boy. But as I was saying, the word which it is, I gather, my part in this entertainment to guess, that word is —’

At the same moment George Knox’s hat came right down over Tony’s face, causing him to stumble over the counter and all the vegetables to fall on the floor. Tony got up and removed himself from the hat.

‘The word was “cauliflower”,’ he said, picking up the scattered potatoes and onions and putting them into George Knox’s hat. ‘I should have thought you would have guessed that, sir. I made it easy on purpose for you, because you aren’t very practised. I would have guessed it at once.’

‘But I did guess it,’ cried George Knox, much annoyed. ‘But for you and your mother, who make it impossible for me, a man of taciturn humour, ever ready to put himself in the background, to get a word in edgeways, I should long ago have told you the word. And take those onions out of my hat at once,’ he added in fury.

‘Yes, take them out at once, Tony,’ said Laura. ‘Mr Knox is going to take us all to the pantomime on Saturday.’

‘Oh, Mother! That’s the day the hounds meet near Southbridge and Dr Ford has promised to take me. Need I?’

‘It can’t be helped. Mr Knox has determined to take us all to the pantomime,’ said Laura rather ungratefully, ‘and there it is.’

‘I dare say Rose and Dora will enjoy it,’ said Tony. ‘It’s rather a treat for kids, of course. Can I wear my trouser suit, mother? And shall I have my school tie or the one I bought for myself for one and sixpence halfpenny? It’s a jolly good tie, sir,’ he said, turning to George Knox. ‘If you want to know a good shop for ties, come to me, sir.’

Laura now had to apply herself to pacifying George Knox, suppressing Tony, and calming Rose and Dora. Luckily, the Vicarage cook arrived to fetch the girls, and as she was on extremely bad terms with Stoker the maid, she had her young charges out of the house in no time.

‘Now, George,’ said Laura, ‘this is an awful treat that you want to give us, but I suppose we shall have to give in. I know Anne and Adrian and Sibyl don’t want to come. Couldn’t I and the three children be a sacrifice for the rest? After all, you can’t take five grown-ups and three children . . .