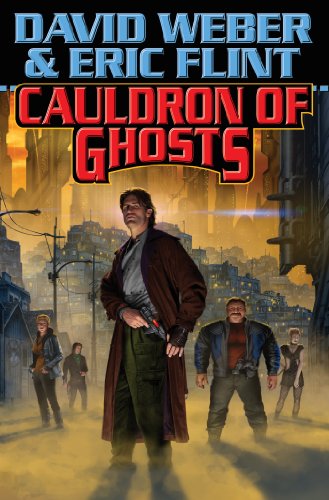 Sequel to national bestsellers Torch of Freedom and Crown of Slaves, Book Three in the Crown of Slaves, - Honor Harrington universe. Secret agent Anton Zilwicki and Victor Cachat return in this classic tie-in series set in David Weber's Honorverse. TOIL AND TROUBLE IN THE CAULDRON OF GHOSTS The Mesan Alignment: a centuries-old cabal that seeks to impose its vision of a society dominated by genetic rank onto the human race. Now the conspiracy stands exposed by spies Anton Zilwicki and Victor Cachat—one an agent of Honor Harrington’s Star Kingdom of Manticore, the other a Havenite operative. The outing of the Alignment has turned the galaxy’s political framework topsy-turvy. Old coalitions have disintegrated. New alliances have been born. For starters, the long and hard-fought war between the Republic of Haven and the Star Empire of Manticore is not only over, but these bitter enemies have formed a new pact. Their common foe: the Mesan Alignment itself. But more information is needed to bring the Alignment out of the shadows. Now, defying the odds and relying on genetic wizardry themselves for a disguise, Zilwicki and Cachat return to Mesa—only to discover that even they have underestimated the Alignment’s ruthlessness and savagery. Soon they are on the run in Mesa’s underworld, not only hunted by the Alignment but threatened by the exploding conflict on the planet between Mesa’s overlords and the brutalized slaves and descendants of slaves who have suffered under their rule for so long. But if Zilwicki and Cachat succeed in rooting out the ancient conspiracy, a great evil may be finally removed from the galaxy—and on a long-oppressed planet, freedom may finally dawn. At the publisher's request, this title is sold without DRM (Digital Rights Management). About the Crown of Slave Series: "Fans of Weber's Honor Harrington series … will be delighted with this offshoot in which he and coauthor Flint develop several situations and characters from other stories. ...This outstanding effort transcends the label 'space opera' and truly is a novel of ideas.”— Publishers Weekly With over seven million copies of his books in print and seventeen titles on the New York Times bestseller list, David Weber is the science fiction publishing phenomenon of the new millennium. In the hugely-popular Honor Harrington series, the spirit of C.S. Forester’s Horatio Hornblower and Patrick O’Brian’s Master and Commander lives on—into the galactic future. Books in the Honor Harrington and Honoverse series have appeared on fourteen best seller lists, including those of The Wall Street Journal, The New York Times, and USA Today. While Weber is best known for his spirited, modern-minded space operas, he is also the creator of the Oath of Swords fantasy series and the Dahak saga, a science fiction and fantasy hybrid. Weber is has also engaged in a steady stream of bestselling collaborations including his Starfire Series with Steve White, which produced the New York Times bestseller The Shiva Option among others. Weber’s collaboration with alternate history master Eric Flint led to the bestselling 1634: The Baltic War, and his planetary adventure novels with military science fiction ace and multiple national best-seller John Ringo includes the blockbusters March to the Stars and We Few. Finally, Weber’s teaming with Linda Evans produced the bestselling Multiverse series. David Weber makes his home in South Carolina with his wife and children. Eric Flint is a modern master of alternate history fiction, with over three million books in print. He’s the author/creator of the New York Times best-selling Ring of Fire series. With David Drake he has written six popular novels in the “Belisarius” alternate Roman history series.