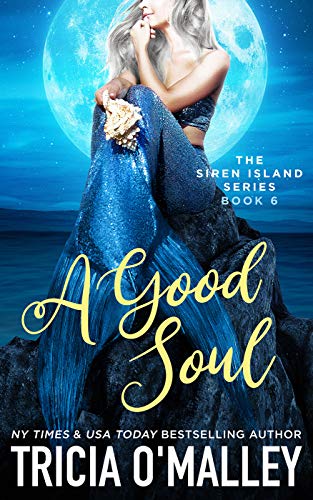 In the sixth book in this much-loved series, Tricia O'Malley whisks you away to magickal Siren Island where a mermaid discovers that sometimes love comes around twice.Irma’s life has been defined by tragedy – one which the legends of Siren Island will never let her forget. Because of this, she’s learned that taking a chance on love isn’t worth the high cost that comes with it. Instead, Irma contents herself with the simple pleasures in life – running her guesthouse, spending time with her girls, and swimming in the Caribbean-blue waters each day. However, when a handsome Australian with a mysterious past shows up at The Laughing Mermaid, Irma’s understanding of the world shatters.Ezra has settled into an easy life of bachelorhood, preferring to travel and focus on his one goal – uniting the Mer tribes of the world. Freedom, flexibility, and following his own whims are things he values most and he lives his life exactly as he pleases. But it only takes one note of Irma’s siren song to entrance him and now he only has one goal in mind – how to make this luscious siren his own.Now, despite Ezra’s irresistible charms, Irma still feels like she must guard her heart. Will she be able to let down her walls and risk it all for love – one more time?

It was the song that caught him.
Ezra dove deep, his strong Mer fin propelling him beneath the water, and yet still the music reached him. He hadn’t announced his presence to the Mer of Siren Island yet, but this mermaid’s song was proving to be irresistible.
The notes, drifting over the water, were meant to warn others away but only served to entice him closer. The music hooked into him as though it were alive, curling its tentacles around his soul and dragging him under the water until he surfaced closer to where the music rang out. Never had he been so compelled to follow a siren’s song before.
Ezra wasn’t sure he particularly liked it, either.
She was gorgeous.
But Ezra had seen many beautiful women. It was common for the Mer to have stunning physical attributes. When everyone surrounding him could easily be on the cover of fashion magazines, physical beauty lost its ability to intrigue. Ezra supposed he shouldn’t think like that as the Mer were taught to find the good in everything. Ezra tilted his head to study the woman on the rocks. It was more that outrageously gorgeous beings had become normalized to him. This had forced Ezra to look deeper when he met someone, causing many of his relationships to unfold quickly. Beautiful women were as much drawn to his good looks as they were to his money. Likely more so to the latter, which had caused Ezra to swear off looking for a partner over the past few years.
But this woman – oh she might as well have been a goddess. Ezra swam quietly closer, his eyes drinking in the siren who sang somberly on the rocks, bathed in a wash of soft moonlight. Her skin glowed as lustrous as a pearl, her eyes wept with sorrow for the ages. He wanted to comfort her, Ezra realized with surprise. There was something so enchanting about this melancholy mermaid that had Ezra not known better, he’d have been convinced she was a witch.
Her head lifted and Ezra dipped below the surface before she turned and caught him staring at her from inky waves of the sea. He wasn’t ready to announce his presence to the mermaids of Siren Island yet – at least not until he’d done more research.
Ezra Jameson had spent his life focused on doing the best he could to effect positive change for the oceans. He ran a successful environmental assessment agency in Australia that focused on sustainable coastal development, and on the side he poured his heart into his non-profit business which centered on ocean conservancy. The ocean was his people’s home, after all, and he considered it both a duty and an honor to protect it. But over the past few years, he’d succumbed to his wanderlust and had struck out on a new and potentially dangerous mission – to unite the tribes of mermaids around the world.
Siren Island was his latest stop, and he’d only arrived on his sail boat a few days ago. Slowly, he’d been exploring the charming island – from its colorful houses clustered together along the coast, to the long expanse of cliffs found on the south side of the island. The island seemed to hum to him – all power and charm and romance – and he found himself captivated by the warm dusty days and breezy nights.
It shouldn’t be dangerous to visit new tribes, Ezra reminded himself. The Mer were usually receptive to their own kind. It was more that nobody had ever tried to do a task of this nature before. In his mind, Ezra had a vision of creating a United Nations for the Mer with a focus on protecting the oceans they lived in. It was a lofty goal, he knew, but someone had to start somewhere. Bit by bit, Ezra had begun to explore the world and meet other tribes which was how he’d wound up at Siren Island, completely entranced by one luscious mermaid.
He wondered who had hurt her.
It took all of Ezra’s self-control not to surface once more and drag her into his arms, soothing away the ache that resonated deeply in his core from her song. He wanted to cry with her, to save her, anything at all really to bring a smile back to her face.
She was every-woman. All-knowing. All-powerful.
And in a sharp moment of painful self-realization, Ezra understood that she was his fate – the woman he’d been waiting for his whole life – and he would never be able to leave this island without her.