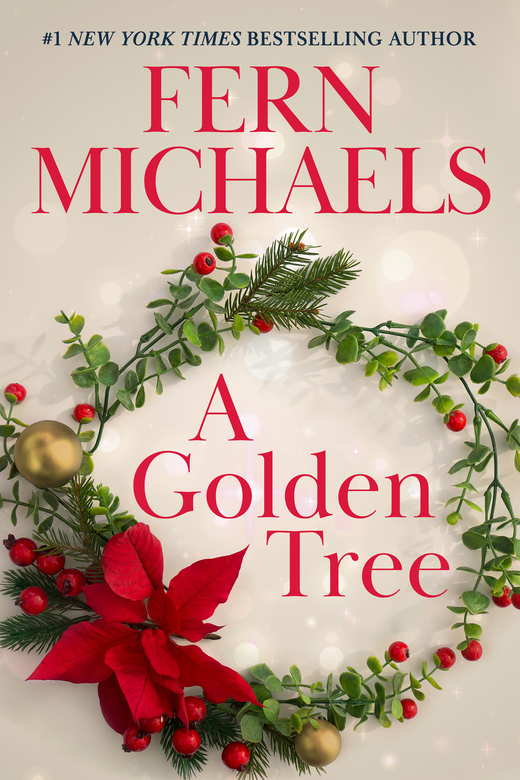 At Christmas time, the grand hall of the Grove Place Inn in Asheville, North Carolina is the most beautiful sight that manager Holly Simmons can imagine, filled with an assortment of firs and pines twinkling with thousands of tiny lights. This year, the inn’s guest list includes bona fide royalty—Countess de Silva of the legendary Vigilantes, who has invited along some very special friends . . .

The seasonal rush leaves Holly no choice to but to hire a new assistant, but does her top candidate, handsome Gannon Montgomery, belong in the ‘naughty’ or ‘nice’ category? While Holly uncovers the surprising truth about her new hire, the Sisterhood and Godmothers are undertaking their first joint mission. And when these forces unite, the result can only be a warm and wonderful holiday—with a special touch of magic . . .

Previously published in Wishes for Christmas

Ava, her assistant and best friend, giggled. “I’m pregnant with twins, my dear, or did you forget? The doctor has ordered complete bed rest for the next three months.”

Holly looked at her computer screen, which showed just how overbooked the inn was this year. Holiday parties almost around the clock. The Grove Place Inn, owned and operated by the Simmons family for five generations, had just been asked to host the governor’s annual family Christmas party again this year. And if that wasn’t enough, several dignitaries from other countries were flying in simply to attend the governor’s “family” party. The state’s chief executive had reserved the entire third floor for his guests. Holly could only imagine what kind of party he’d throw for his friends if this was just “a little family gathering.” His exact words. She recalled last year’s party, the aftermath. It wasn’t pretty, but the guests had said it was the best party they’d ever attended. The governor had promised to host his party at the inn for as long as he was able. Holly would assign even more extra staff to the event to prepare for the unexpected.

“Well, did you?” Ava persisted.

“You did,” Ava stated matter-of-factly.

Holly smiled. “How could I forget that my best friend since second grade is having twins?”

“I can tell by your voice, you’re distracted and a bit overwhelmed. I knew you would be, so I took the liberty of narrowing the pile of applicants down to six. If someone is going to take over my job, I want to make sure that person is up to the task. Now, all you have to do is the final interview and choose the person you think will do the best job.”

“Ava, you know as well as I do that no one can replace you. I realize you’re about to have twins, but when they’re older, you might want to return to work. I’m telling all the applicants this is only a temporary position.”

Both women laughed. Friends since elementary school, Holly and Ava did everything together. Holly had gone to the University of North Carolina at Asheville, where she’d earned her bachelor’s degree in business, with Ava at her side, majoring in the same subject. When she graduated, just like family members before her, Holly started working at the inn the very next day, wanting to continue the family tradition, and so did Ava. All Simmonses had to start from the bottom and learn every single job at the inn. And all the Simmonses’ best friends, no matter how cute they were, had to follow the exact same rules as the family. Holly remembered her father telling her this when she’d asked if Ava could work alongside her.

Of course, they all had known it was a given, as both Holly and her best friend had started working at the inn within days of turning sixteen, the minimum age at which they were legally allowed to become paid employees at the Grove Place Inn. They both had lived, eaten, and breathed their jobs. When it was time for college, they’d studied hard, both achieving 4.0 grade point averages and graduating at the top of their class. Wanting to take their education one step further, they’d agreed it would benefit them to earn master’s degrees in finance, as well. They did so by juggling their careers at the inn with their master’s studies, and in two years they both had advanced degrees in hand. They had returned to the Grove Place Inn and immediately started their careers.

That had been eight years ago. Both thirty-one years old, they were total opposites outside the inn. Ava had married just three years out of college, a year after getting her master’s degree, while Holly had dated a lot but had had only one serious relationship. Sadly, Michael Strauss had been killed in a motorcycle accident right before she’d decided he was “the one.” Since then, she had avoided serious relationships. They hurt too much.

“Holly, is something wrong?” Ava asked.

Ava’s question jolted Holly back to the present, and she replied, “Yes. No. I’m just a bit overwhelmed right now. I’ll be fine once I hire a temporary assistant.”

Ava giggled, her high-pitched laughter sounding like a squeal over the phone. Holly held the phone away from her ear until her friend’s laughter subsided.

“I’m serious, Ava. I am not going to replace you. Who knows? When the babies are older, you might want to have an adult day. And if you do, your job will be waiting.”

“You could be right. Though I won’t know for a while.”

“Somehow, I can’t see you and Stephen confined at home together twenty-four/seven. I know how you like your space. Add in those two little bundles, and I can see you needing an adult day now and then.”

More laughter. Holly rolled her eyes, for once glad Ava wasn’t in the room. She’d changed since getting pregnant, becoming much more emotional. She either giggled all the time or cried. Holly would be glad when Ava returned to her former, even-keeled self.

“Stephen is converting that old junk room above the garage into his home office. That way, he won’t have to go to Starbucks to meet clients. So, it will be as if he’s gone, anyway. I like the arrangement. Gone, but close by if I should need him. Plus, he can invite clients over. I think it’s the perfect arrangement for now.”

Holly wondered how long that would last. Stephen was thrilled at the prospect of fatherhood. She doubted he would spend a minute more than necessary in the new office. She didn’t tell that to Ava. She didn’t want to ruin her friend’s image of life after babies.

“I’m sure you two will figure things out.”

Holly inhaled and raked a hand through her short brown hair. The holidays were going to be rough this year without her mother. She’d been dreading them since February, when her mother died unexpectedly of a massive heart attack. Why was it that those she loved had to be taken away from her too soon? If it weren’t for her father, her grandfather, and the inn, Holly would’ve preferred to skip Christmas altogether this year. And the year after. It was just too sad.

Pushing her chair away from her massive walnut desk, Holly stood and walked over to the window, where she had an absolutely dazzling view of the Blue Ridge Mountains. Looking at the majestic sight always calmed her. The sheer beauty, the totality of the mountains’ greatness, the vast array of trees—poplar, red maple, oak, and so many more. Holly couldn’t name them all. They had all but denuded themselves of their jewel-toned leaves, except for an occasional single deep red or golden leaf free-falling, with the powder-blue sky as its background. She always felt a momentary bit of sadness when the trees were naked and bare.

Though western North Carolina didn’t have the treacherous winters found in the Northeast and the Midwest, she hated to look out this very window and see the limbs stripped of their autumnal glory. That was how she always thought of them. Glorious. Colors no one could re-create, not even an artist as skilled as Stephen. Though his title was graphic artist, he also painted phenomenal landscapes, but even he had yet to match the perfection of the colors the trees displayed in autumn.

Holly finally spoke. “I feel like skipping the holidays this year. It just doesn’t feel right without Mom.” Tears blurred her vision, and the back of her throat tightened when she remembered the raw pain from the events earlier in the year.

“Oh, Holly, I know how you must feel. Violet was like a mother to me, too. She’d want you to make this holiday as special as all the others. You do realize that?”

Holly knuckled a single tear away before it could ruin her carefully applied makeup. “You’re right. I’m just being a big baby. I just. . .