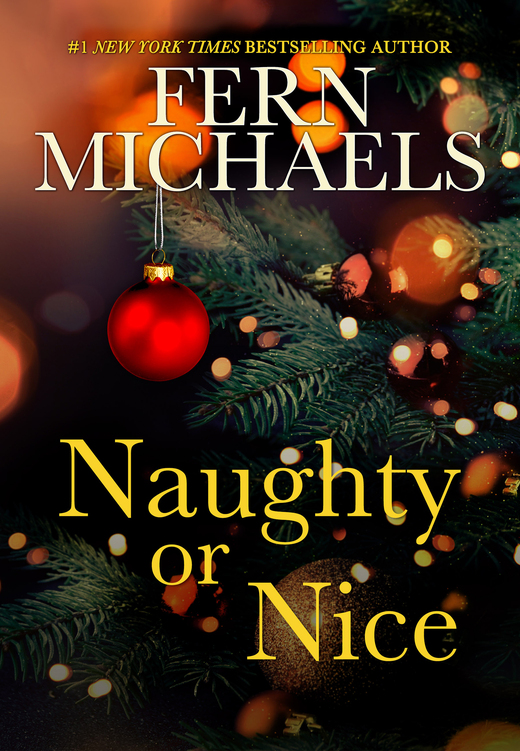 Fern Michaels’ Christmas novels are pure holiday magic—uplifting stories of love, family, and friendship in irresistible settings. And when she brings her bestselling Godmother series into the mix, the feel-good results are sure to kindle endless seasons of joy.

Teresa Amelia Loudenberry— “Toots” to all who love her—knows a thing or two about grace and generosity. Which is why, with a little help from the other Godmothers, Toots is preparing for Charleston’s annual holiday showcase of historic homes. Donations from the event will help fund Homes for Heroes, her charity to build residences for veterans returning from overseas. To put everyone in the right spirit, her mansion is festooned with carefully researched antique ornaments, beautifully arranged by Charleston’s most exclusive design firm. But when the Godmothers sense trouble with one of the decorators, they must tackle a mystery and hope for a happy ending . . .

Previously published in Wishes for Christmas.

Donations would be accepted but were not necessary. They had all agreed that whatever money was collected would be donated to the new organization Toots and Phil had recently started, Hope for Heroes. It was their hope to build as many homes as possible for those hundreds of war veterans returning from overseas. A new start, a small reward for their service. It was her latest endeavor, and she planned to make this as successful as her other charitable organizations. Maybe even more so, given the necessity. She focused her thoughts back on the present.

Strangers would be traipsing in and out of their home, and Toots knew that a few of her snooty South Carolina so-called friends would also take advantage of the opportunity to get a bird’s-eye view of her Southern mansion. And knowing some of them, they wouldn’t bother dropping one red cent into her latest and, to her, most important project to date. Knowing her critics, meaning those “so-called friends,” who were really nothing more than a bunch of rich old women with nothing better to do, she realized that they would note every imperfection. Over the next four weeks, from six to eight in the evening, when her doors were open, Toots planned to disappoint them. She and Phil had hired a team of Charleston’s hottest holiday designers, Blanche Harding and Associates.

Their charges were astronomical, but Toots didn’t care. Some would have squawked at such a large sum, but she knew she would get her money’s worth, and then some. Personally, she disliked Blanche intensely, but the woman’s decorating eye was spot on, and her specialty was Southern plantation homes. If asked, neither Toots nor Phil could say anything nice about her other than that. They had both observed the way she treated her underlings on more than one occasion since she had been hired, and they most definitely did not like what they had observed. After the holidays, Toots planned to give the snooty, pumped-up harridan a piece of her mind.

She walked over to the fireplace and moved the exquisite crystal candleholders away from the edge. Now three years old, Jonathan and Amy were growing by leaps and bounds. She was sure that if either of them chose to, they could reach the delicate crystal and topple it over. Satisfied that the tapered red candles and holders wouldn’t cause harm to her grandchildren, Toots stepped back to admire the decorators’ work.

The fragrant evergreens flanking the floor-to-ceiling windows filled the room with the sharp scent of pine. The sweet-smelling magnolia blooms, which she had personally picked from her trees, had been placed in exquisite vases throughout the main room. The hoity-toity Blanche had insisted that the main room was to be referred to as the “parlor.” To Toots, it was simply a beautiful formal living area that in no way was off-limits to anyone, especially not her grandchildren. However, for the month of December, she would allow the fine citizens of Charleston to parade through her “parlor.”

The focal point of her “parlor” was the twelve-foot Fraser fir in the corner, beside two large windows. Velvet red and green ribbons tied in large bows, hundreds of miniature white lights, and the many antique ornaments Toots had collected made her tree unique, one of a kind. Blanche Harding thought the lights too modern, but there was no way Toots was going to have a tree as gorgeous as this without Christmas lights. She knew candles were used back in the day, and she also knew many a home had been destroyed by fire. No, she’d stick to store-bought lights. Let someone else take a chance with the candles.

Christmas was her very favorite time of the year. The decorations, the sweet smell of baking, packages wrapped in bright, shiny colors, the added cheerfulness of store clerks, and most of all, the looks she was bound to see on Jonathan’s and Amy’s faces when they opened their present this year, or rather when they saw their present, as it was much too big to wrap. Last year they’d been excited, but as most toddlers did, when their presents were opened and tossed to the side, they had more fun playing with the ribbons and boxes. This year would be different. Both had a vocabulary that could rival that of a ten-year-old, and they knew all about Christmas. Abby and Chris had taught them the true meaning of the holiday, and every time Toots would ask the children what they wanted for Christmas, both would respond with, “We want to sing ‘Happy Birthday’ to the baby Jesus first,” and then they would recite a litany of the latest board games they wanted.

Toots was sure Abby was never this smart at such a young age, but she knew the times were much different. Jonathan and Amy each had their own iPad mini, and both were quite proficient as they navigated their way through the many apps that were for older children. Both knew how to write their name, they knew their address and phone number, and just in case that wasn’t enough, they knew they were to call 911 in an emergency. They were still having a bit of trouble distinguishing what a true emergency was, but Toots had faith in Abby’s and Chris’s parenting skills.

She smiled when she thought of her daughter and how her life had changed. At one time, Abby had lived and breathed Hollywood gossip; she had spent several years working as a tabloid reporter. Of course, when Toots had learned that Abby might lose her job at The Informer, she had purchased the tabloid on the sly and had made Abby the editor in chief. This was all behind the scenes, but when Abby was kidnapped by the paper’s former owner/editor and held for ransom, Toots had had no choice. She’d revealed that it was she who’d purchased the struggling tabloid.

Abby was appreciative, and never once had she accused Toots of trying to control her career. Abby thought it was a grand gesture to this very day, and even though Toots had given Abby the deed to The Informer on the day of her baby shower, and it now belonged exclusively to her, Abby had allowed Josh, a onetime cub reporter, to climb the ranks, and now the day-to-day duties were his alone. Abby had said she didn’t have a reporter’s instincts anymore, but Toots wasn’t so sure about that. Once a reporter, always a reporter.

Abby’s reporting instincts had simply been transferred to the twins. She investigated every source of food that went into their mouths; every toy they owned was checked and rechecked for safety and recalls, just in case; and last but not least, Abby refused to use any product of any kind that wasn’t organic. Personally, Toots thought this was taking things a bit too far, but she kept those thoughts to herself. She respected Abby’s decisions and always did as she asked. Well, almost always.

She remembered that just last week she’d brought home dozens of cookies from The Sweetest Things, the bakery she and Jamie owned in Charleston. She’d let both childre. . .