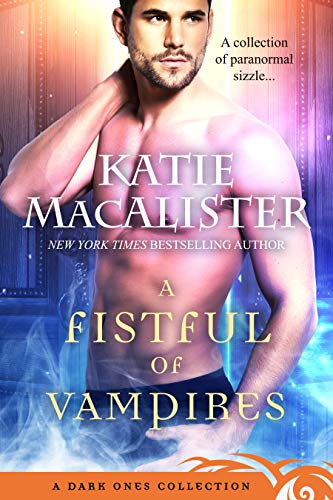 A Fistful of Vampires: A Dark Ones Collection

A collection of paranormal sizzle including two tales of Dark Ones and the women who've tamed them, and a short story call back to where it all began!

◆ UNLEASHED
Meet Jacintha Ferreira, kitty whisperer. Or at least that's what the guys around the Washington State Game and Wildlife office call Jas. Her skills with bigger cats than are normally found left on the back doorstep of the Cupid Cats Animal Shelter are put to the test when she encounters a sexy Dark One shapeshifter who has no idea how he became a really big kitty...but he does know a Beloved when he sees one.

◆ BRING OUT YOUR DEAD
Battling a demon lord is all in a day's work for the Dark One named Sebastian. But now he must take on a horde of unhappy zombies and an obnoxious teen vampire if he wants to win the hand of the one woman who can make him whole.
Ysabelle is a woman with a past, and not a whole lot of future if a certain demon lord has his way. With zombies, demons, and a little thing like death standing in her way, will she find happiness in the man who's seen more darkness than she can imagine?

◆ CAT GOT YOUR TONGUE?
Raphael St. John and Joy Randall are finally having their happily-ever-after. Fans of the Dark Ones have often wondered about Raphael's amber eyes and his skittishness around members of the Otherworld. Could there be more to him than meets the eye? Something not strictly human...?