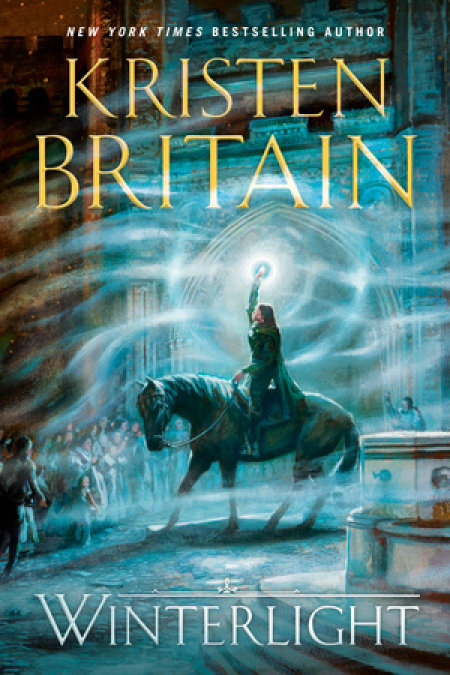 After her capture at the hands of Grandmother and the Second Empire, Karigan G'ladheon is making halting progress towards recovery. Karigan takes on increasingly dangerous missions, haunted by the specter of her torturer, Nyssa, and sinking ever further into the mire of her recollections of the past and the losses she's sustained.

Meanwhile, the forces of the Second Empire are moving on Sacoridia and their primary target is a vulnerable garrison that guards a crucial mountain pass. Faced with new fatherhood and a country on the verge of war, King Zachary sends a contingent of soldiers and Green Riders to the pass--but his own recovery from the events of the north is not yet complete either.

Reunited with her fellow Riders at the pass, Karigan takes on a leadership role, but quickly finds that the Riders are not as she last left them. As tension mounts and war draws ever closer to the heart of Sacoridia, Karigan must discover what it truly means to be a Rider and a hero of the realm--and what sacrifices must be made to truly heal from her past. 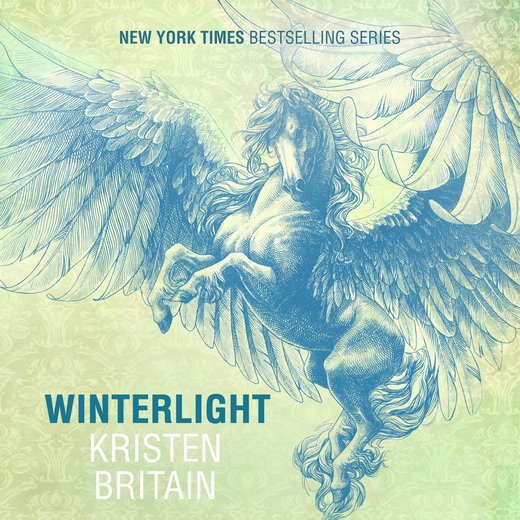 Waldron Gates cradled his broken arm to his chest and huddled in the lee of his overturned cart to shelter against the drizzle. He lay upon shards of broken pottery, all that remained of his winter's work. Unfortunately, it wasn't just the pottery he'd lost in his encounter with the brigands, but the goods he'd traded for, as well-foodstuffs, tools, seeds-all the necessities that would see him through the coming year. They'd even robbed him of his poor old mule. He supposed he ought to be grateful he still had his life.

Shivers racked his body. He needed to get dry and warm, but every time he tried to stand, his vision dimmed and his knees buckled. When the cart tipped over during his attempt to escape the brigands, he'd hit his head. A little rest was what he needed. Yes, a little rest to regain his strength so he could make his way back to Boggs where the townsfolk could help him. He tried not to dwell on how long a walk that would be.

Dusk would soon fall, and Waldron resigned himself to spending a cold, miserable night beside the road. He'd faint hope of passersby helping him as the "road" was little more than a backwoods trail that was scarcely fit for a laden cart, but it was a shortcut to a settlement northward where he had planned to sell more of his wares.

Some shortcut, he thought.

The chances of a friendly traveler passing by and offering aid were pretty slim.

"Should make a fire," he murmured, but he hadn't the strength, and how could he manage with just one arm?

He dozed off, waking now and then out of some nightmare of skull-faced men tormenting him, materializing out of the woods once more to chase him down the road.

A snap of a twig, the plod of a hoof.

He jerked to full wakefulness, sweat mingling with raindrops on his face, to find his nightmare come to life. A horseman wreathed in mist loomed above him. The horse pawed the road. Harness jingled when it shook its head. Fear flooded through Waldron's veins. Maybe he was already dead and this was some kind of spirit come to carry his soul to the heavens, like it was said the death god did. Or was this the leader of the brigands come back to finish him off? Did the rider have a skull face? He could not tell in the deepening dusk.

"Have you come back to kill me? P-please-please have mercy. You got all I had." Tears streamed down his cheeks.

"Are you badly hurt?" The question was spoken in a perfectly natural woman's voice. Not the skull-faced man, not a death spirit.

Waldron sobbed in relief. "Think my arm is broke."

She dismounted and knelt before him. In the gloom he could not make out her features, but from her silhouette she seemed to be wearing some kind of uniform.

"We need to get you warm and dry," she said. "How long have you been here like this?"

"That is a long time. What's your name?"

It was so kindly asked that he fought the urge to sob again. "Waldron-Waldron Gates."

"Well, Waldron, I'm going to see if I can find a dry patch in the woods and set up some shelter." There was the glint of brass buttons as she removed her coat-and to his astonishment-blanketed him with it.

"Will you be all right while I look after things?" she asked.

Waldron nodded, already feeling warmer beneath the coat. It was not wet all the way through like his was. He lost track of time and drifted off while she went about her business. This time the nightmares stayed away as though the coat were a shield.

A while later, he didn't know how long, she gently shook his shoulder to wake him and helped him to a spot amid a group of pines where a small fire crackled.

"Some of the crates that held your pots were still dry," she explained. "Nice seasoned wood. The straw and sawdust helped, too."

Yes, he'd used straw and sawdust to protect the pots during transport.

She'd placed tarps over branches to help keep the drizzle off. The ground beneath the protective boughs of the pines was relatively dry. She guided him to blankets next to the fire, then tended to his injuries. When she splinted his arm, he nearly fainted from the pain. He watched her as she worked now that he could see her a little better in the glow of the fire-short, shaggy hair, one eye covered by a patch. A winged horse was emblazoned on the left sleeve of her shirt in gold thread.

"Green Rider?" he said in surprise. It was a rare sighting here in the backwoods. "What's a king's messenger doing out here in the middle of nowhere?"

"Rescuing potters, it would seem." A brief smile flickered across her lips; then she made a final knot with a cloth to hold his splint in place and sat back on her heels. "Actually, I think I got a little lost. I decided to take a shortcut, but it ended up not being so short."

Waldron barked a laugh. "My shortcut didn't work out so well, either."

She smiled again, and again it was brief. "I am boiling a pot of water for some willowbark tea," she said. "It may help your pain. If you feel up to it, I have some food I can share, as well. Maybe while we wait for the water to boil you can tell me what happened here."

She listened gravely as the story spilled out of him-of the band of cutthroats emerging from the woods as if out of the air; of his short mad dash in an attempt to escape them until the cart wheel broke off and he went flying.

"They took everything I'd acquired in trade," he said. "They weren't much interested in my pots, though."

"Where were you coming from?"

"Boggs," he replied. "I stop there every spring. The Antlers Inn always takes some of my pottery."

"So this is the Boggs Road," she murmured.

"Guess you really were lost if you didn't know."

"I came out of the woods," she replied. "Was bushwhacking for days before I found the road. I thought it probably led to Boggs but wasn't sure since there were no wayposts." She handed him a mug of tea. "What can you tell me about these men who robbed you?"

He pressed the mug against his chest. The heat penetrated through his clothes and he sighed in contentment. "I was in and out of consciousness after the cart went over. Maybe I looked dead enough that they didn't kill me."

"Or maybe they wanted you alive to spread word of them, which would cause fear among the populace," she said. "But please, continue."

"I think there were half a dozen of them. I didn't see much, but they seemed . . . not just brigands, but trained warriors the way they moved. They had some discipline about them. And their leader . . ."

He closed his eyes summoning the horrible image to his mind. "Skull face."

"His face was tattooed so it looked like a skull. He'd no hair but for a topknot. Have never seen the like, and never want to again." The nightmares were going to come back, he just knew it. "The others called him Torq."

"Torq," she echoed. She did not reveal to him if she'd seen or heard of this Torq before, but asked, "Anything else you can tell me? So I can take news of it to the king?"

"No. They took my things like I said and disappeared."

He paused to consider. "I must have blacked out because when they left, it was almost like they disappeared."

The Green Rider didn't reply, just tossed more wood onto the fire. Sparks flurried upward and glinted in her one eye like stars. He shuddered once more and turned his attention to the hardtack she'd given him, though his stomach wasn't much interested in food. When he finished his tea, she took the cup from him.

"I think you should sleep," she said. "It'll be a long day tomorrow to get you back to Boggs. Someone there with mending skills should be able to fix you up right."

She helped him lie down.

"Those brigands won't come back, will they?" The anxiety had been building in his chest. "What if they see the fire and come back?"

"They already got what they wanted," she replied. "They won't bother to return."

She hesitated. "I don't think they will, but I'll be keeping watch in any case. Rest best as you can. I'll be right here if you need anything."

He felt almost like a child as she pulled a blanket over him. He tried to get comfortable, but his splinted arm made it difficult. It hurt so much, and the willowbark tea had done little to ease the pain. He watched as she returned to her place on the other side of the fire. Drops of water plopped onto the tarp overhead. Her horse shifted nearby.

He thought of his mother when he was a lad and how she'd take care of him when he was hurt or ill. How she'd sing him to sleep. "Could-could you sing something?" he asked. "It'd help me sleep."

She chuckled. "No. No it wouldn't. I can't carry a tune to save my life. Sorry."

Maybe he'd been silly to ask this of one of the king's own messengers, but with her taking care of him, she'd put him in mind of his dear mother, long buried and resting in peace. Sleep began to descend even without a song. "You got a name?" he asked her as he drifted off.

"Goodnight, Rider Karigan," he said, his voice beginning to slur.

His last vision before sleep took him was of the Green Rider sitting alert by the fire with a staff resting across her lap. He was not plagued by nightmares, after all, and he slept soundly, feeling quite safe with Rider Karigan to watch over him through the night.