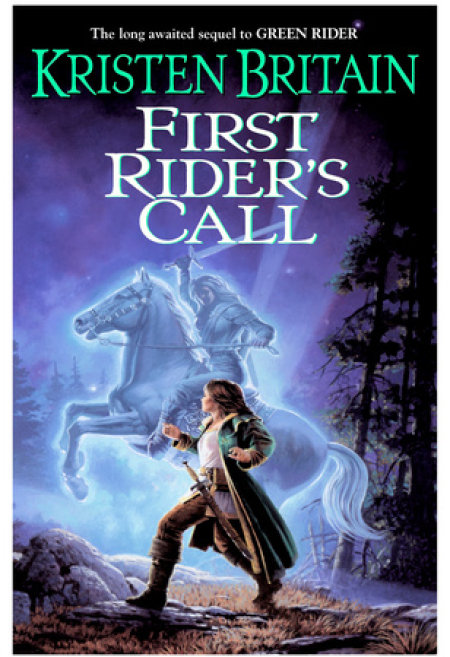 Second in the Green Rider series from the New York Times bestselling author of The High King's Tomb. Once a simple student, Karigan G'ladheon finds herself in a world of deadly danger and complex magic, compelled by forces she cannot understand, when she becomes a Green Rider-one of the magical messengers of the king. Forced to accept a fate she never would have chosen, she attempts to return to her life as the daughter of a wealthy merchant, but the magic in her blood is too strong. Pursued by the ghost of the legendary First Rider, she rejoins the Green Riders to confront an ancient evil. 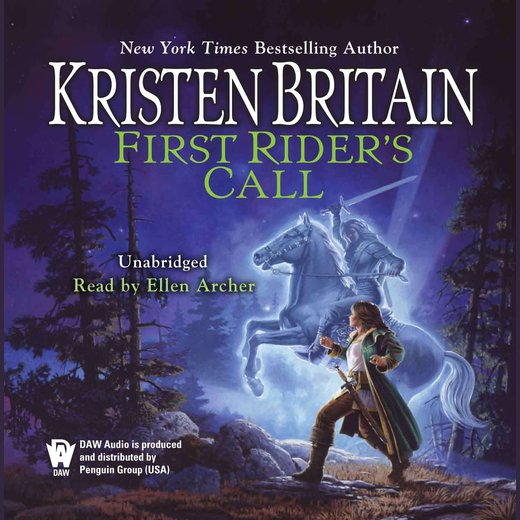 The apparition's soft, otherworldly glow fell across the sleeping form on the canopy bed.

Sultry night air tinged with sea brine flowed through the wide-open window, stirring the sheet that covered the girl. Her long brown hair was splayed across her pillow, and her chest rose and fell in slow, even breaths. She slept unaware of her ghostly visitor, an expression of utter tranquility on her face.

And that was the problem.

Displeasure flickered across the apparition's smoky features. You can hear me, but you won't listen, hey?

The apparition nudged at the girl's shoulder as if to awaken her, but her hand simply slid through it.

Cannot feel me. Cannot see me. WILL NOT listen.

The girl had become very disciplined at ignoring the call, and if there was one thing that annoyed Lil Ambriodhe most, it was being ignored.

Lil had, in her own opinion, exercised a great deal of patience, actually biding her time during the year the girl took to finish her schooling, thinking it couldn't hurt, and that afterward she would finally heed the call and return to Sacor City to take her oath before the king as a Green Rider.

She did not. She defied the call and went home to Corsa instead, and for what? To count bolts of wool on one of her father's wretched wagon trains? To balance ledgers? What was alluring about that? Why did she resist?

Lil paced until she realized her feet no longer touched the floor, but hovered above it. By all the hells! She tried to focus on the floor so she might at least achieve the illusion of standing on it, but the effort bled too much energy from her. She cursed in frustration at the limitations of her current form, and glowered at the sleeping girl who made all this necessary. If she could manage it, she would've hauled her right out of bed. Thankfully most Riders weren't this difficult.

And even while she thought this, she observed that the floor beneath her feet was covered by a rare Durnesian carpet, and that the carved beams overhead brought to mind the mastery of shipwrights. The furnishings were deeply burnished and inlaid with ivory wrought with intricate ornamentation. They had a foreign look, as though brought from across the sea. Even the mattress the girl slept on was stuffed with eiderdown, and the sheets were of a delicate weave.

As the daughter of a wealthy merchant, the girl lived at a level of luxury incomprehensible to most Sacoridians, and Lil could understand how trading this privileged and comfortable life for that of the rugged, dangerous duty of a Green Rider might prove difficult.

In another sense, she could not. The Riders did important work. There were enough merchants in the world and far too few Green Riders.

She was needed, this girl. This girl who over a year ago defeated a rogue Eletian and played an essential role in saving the king's throne. And there was more ahead for her.

A positive sign that all was not lost was the gold winged horse brooch resting on the table next to the bed. It was the most substantial thing about this realm in Lil's vision, more solid and brilliant than anything else. It seemed the girl could not part with it; the bond still held. Had it abandoned her, there would be no possibility of her becoming a Rider.

And our link would have been lost.

Lil touched her own brooch, which was clasped to the green-and-blue plaid she wore draped across her shoulder, and drew comfort and strength from it. It had helped her come this far between the layers of the world. Its resonance sang through her and the girl's brooch seemed to sparkle in response.

A Rider's true heart the brooch shall seek . . . Lil cocked a smile as she remembered the old tune. Great heart, stout heart, strong and bold, the iron hearts of Riders glitter as gold . . . How could she forget? Every self-proclaimed bard and halfwit of the lands had taken up the tune wherever she rode, whether she sat in a great clan lord's banquet hall or in a dilapidated tavern with goats chewing on the rushes strewn across the floor. She couldn't escape it! It was better, she supposed, than having stones thrown at her, though some of the singers had been painfully bad.

She glanced out the window at the moon and cast off the memories like an old cloak. There was work to do here and time was growing short. She leaned over the sleeping girl, and using every ounce of command she could summon, she said into her ear, Karigan Galadheon, you must go to Sacor City. Hey? You are not a merchant—you are a Green Rider.

Lil watched on in satisfaction as the girl murmured and shifted. Her satisfaction turned to dismay, however, when the girl wrapped her pillow around her head.

Ach. Lil shook her mane of unruly hair in disgust, and wondered if the girl's lineage had anything to do with her contrary nature.

She had but one last recourse to fall back on, and if this failed, she had no idea of how to rouse the girl. Lil drew to her lips a twisted horn she kept slung at her side. It had been a gift from a p'ehdrose named Maultin for a favor rendered. It was fashioned from the tusk of a komara beast, a woolly herd animal that roamed the arctic wastes. Maultin had imbued the horn with a special spell of use only to the captain of the Green Riders.

Lil inhaled and blew into the horn. The notes of the Rider call rang out sure and strong. She sensed it pulsing through the layers of the world, ringing with need and urgency. Would it reach far enough? Would the girl hear it? Most importantly, would it reach her heart?

Lil lowered the horn, listening still as its crisp notes faded away. And she watched. At first there was nothing and Lil's hopes plummeted, but then the pillow was flung aside and the girl—young woman, really—sprang upright into a sitting position, eyes wide open and bright. She hurled herself out of bed and in a flurry of sheets and nightgown sprawled across the floor in a tangled heap.

Unaware of all else save the call, she disentangled herself and scrambled to her feet. She swiped her brooch from the bedside table and threw open her wardrobe, withdrawing a saber sheathed in a battered black scabbard, and ran from the room as if all the demons of the five hells pursued her.

Lil listened in satisfaction as bare feet raced along the corridor then thunked down a series of stairs.

She convulsed with laughter, her feet rising a few inches more above the floor. She wondered just how far the girl would get before she realized she was riding to Sacor City in her nightgown.