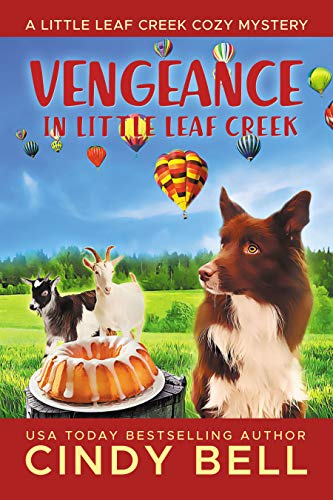 Living in the country comes with a stubborn next-door neighbor, a mischievous dog, and a puzzling murder...

Cassie Alberta is settling into life in Little Leaf Creek. She has made some good friends, has a romantic interest and is moving on from the death of her husband. She loves living in the small town next to two naughty goats and a cheeky Collie mix. The Little Leaf Creek locals are excited to be hosting a hot air balloon festival. But everything comes crashing down when someone ends up dead.

Cassie partners with her aloof ex-cop next-door neighbor to try and find the killer. But have they bitten off more than they can chew? The list of suspects is sky high and they find themselves in turbulent territory.

Can Cassie catch the killer before they float away?

Vengeance in Little Leaf Creek is the fast-paced fifth book in the Little Leaf Creek Cozy Mystery Series. If you like unexpected twists and turns, lively personalities, lovable animals and a never-ending list of suspicious characters, then you'll love Cindy Bell's heartwarming whodunnit.

Cassie Alberta took a deep breath of the fresh air and closed her eyes for a moment. Dew still clung to most of the surfaces in the wide expanse of the park. The grass had been trampled on by hundreds of people as they gathered together to witness a very special event in the small town of Little Leaf Creek.

When she opened her eyes again, she was dazzled by the assortment of colors that dotted the bright blue sky. Hot air balloons floated up into the air from several different directions.

“This is it, everyone!” An enthusiastic voice carried over the speakers that had been set up throughout the park. “The race has begun!”

“Isn’t it exciting?” Sebastian Vail’s warm hand curled around Cassie’s and squeezed. “I wonder who is going to win.”

Cassie looked up into his boyish face, enlivened by excitement, and grinned.

Despite the years Cassie had spent as the spouse of a wealthy CEO, witnessing a hot air balloon competition had never been on their social schedule. As she watched the balloons surge even higher into the sky, her heart pounded. Of course she’d seen pictures, seen them floating at a distance, and seen them on television, but watching the massive balloon lift off into the sky, propelled by the roar of flames, was far different than anything she could have imagined. The entire town of Little Leaf Creek cheered around her.

Even Tessa Watters, who stood a few steps behind her, with Harry, her Collie mix, on his leash, let out a holler of approval.

Cassie looked over her shoulder and smiled at her.

“Do you have a favorite, Tessa?”

“The one that wins, of course.” Tessa laughed.

“I think it’ll be Joe Swanston.” Sebastian peered up into the sky. “He has the blue and yellow balloon. He’s won a few competitions recently.”

“I’m not sure who is going to win, but that rainbow-colored balloon with the splash of bright green is definitely my favorite.” Cassie watched as it soared through the air. “All of them are so beautiful.”

“That’s Duke Jasper’s balloon. Can you imagine what it would be like to ride in one?” Sebastian glanced over at her.

“Eh, I prefer my feet on the ground, thank you very much.” Cassie laughed.

“You?” Sebastian raised an eyebrow. “You’re afraid of heights?”

“I wouldn’t say afraid exactly.” Cassie shrugged. “I just think it’s wiser to stay on the ground. Less chance of falling, and all that.”

“Oh, and would you go up in one of those contraptions, Tessa?” Cassie spun around to face her.

“Would, have, and plan to again.” Tessa smiled as she met Cassie’s eyes. “There’s nothing better than to be miles and miles above the rest of the world.”

“The balloons have reached the hare balloon, and now they are off to strike the target! Jasper and Swanston seem to be taking the same path toward it.” The woman’s voice wavered as she spoke to someone off the microphone. “Do you think they’re a bit too close to each other?”

“What was that she said?” Cassie frowned.

“I don’t think she meant to say it into the microphone.” Tessa looked over at the stand that had been set up for the announcers.

Behind the microphones were two people, a middle-aged woman and an older man.

“No Naomi, they have plenty of room.” The other announcer responded to the woman.

“That’s a relief, Tucker.” Naomi replied with a sigh.

“Is there some kind of danger to them being too close?”

“There’s actually very little danger in a hot air balloon.” A man spoke up from a few feet away from her. She recognized him as Paul from Paul’s Hardware. “Of course, some things can be unpredictable, such as the wind. Most of the danger comes from them getting caught up in something like tree branches, or powerlines, or a failure of the balloon in some way.”

“Thanks for the information, Paul.” Cassie smiled.

“I think they picked a good spot for the competition. It’s pretty clear out here.” Sebastian scanned their surroundings.

“True.” Paul nodded. “Balloon accidents are very rare from what I’ve read, and when they do occur they don’t usually lead to fatalities.”

“I hope they’ll be okay.” Cassie stared up at the balloons. “What is the hare balloon anyway?”

“They will be, don’t worry.” Sally, Paul’s wife, smiled as she patted Cassie’s arm. “The hare balloon starts the race to the target. It’s essentially a signal that starts the clock. But really, the race isn’t about speed, it’s about accuracy. Whoever gets their marker closest to the center of the target wins.”

“Wow, how do you know so much about hot air balloon races?” Cassie grinned. She had often spoken to Sally in the diner and they were becoming quite friendly.

“It’s an interest of mine.” Sally shrugged. “I’ve known Duke for years, and he is very skilled. His grandmother used to live here, before she passed, and he would visit over the summer when he was in school.”

“Oh, I didn’t know that. Is that why they picked Little Leaf Creek for the festival? It seems a bit out of the way to have a hot air balloon festival.” Cassie shielded her eyes as she looked up at the balloons again.

“Maybe he did suggest it.” Sally gazed up at the sky as well. “I guess he wanted an excuse to visit us again.”

“Or visit you.” Another woman spoke up, with a giggle.

“I’ll go get us some drinks.” He pulled away from his wife and walked off toward the refreshment stands that lined the edge of the park.

“Connie, you shouldn’t have said that.” Sally sighed. “You know how Paul can be.”

“I’m sorry, but why else would Duke have suggested Little Leaf Creek for the competition?” Connie shrugged. “It’s not like anyone even knows about this town.”

“He had great memories here.” Sally crossed her arms as she glared at her friend. “And not just with me. This is a beautiful town, and plenty of people love it.”

“It’s too early in the morning for ice cream.” Sally laughed.

“It’s never too early for ice cream.” Connie walked off.

Cassie raised an eyebrow as she looked over at Sebastian.

“I suspect there’s a story behind all of that.”

“In Little Leaf Creek, there’s always a story.” Sebastian gave her hand a light squeeze. “But I do my best to stay out of them.”

“Now, you sound like Tessa.” Cassie smiled as she glanced over at her friend. Tessa was known for being the town recluse, but Cassie had managed to bring her out of her shell just a little bit.

“As he should.” Tessa patted Sebastian’s shoulder and nodded. “A wise man you have there, Cassie.”

Cassie’s cheeks warmed at the comment. Although she’d come to Little Leaf Creek for a fresh start, in a small town, similar to the one she’d grown up in, she hadn’t expected that fresh start to involve Sebastian. His blond hair and bright eyes, along with his honey sweet accent, had caught her attention right away, just as they caught the attention of almost every other woman in Little Leaf Creek. But she hadn’t imagined that he’d have any interest in her. Still, he’d made it his mission to spend time with her by helping to fix up the farmhouse she’d purchased, and over time he’d proven to her that his interest was genuine. Though things were still new between them, she’d settled into the idea that yes, they were officially an item, which was a big deal in a town like Little Leaf Creek.

“Look!” Sebastian pointed up into the sky. “They’re getting close to the target!”

“Excuse me.” A man in a suit brushed past Cassie as he tugged along a woman who looked to be in her twenties, with long, strawberry blonde hair. She was very striking.

“But Nigel, I want to see the balloons!” The woman pleaded.

“Not now, doll, I have business.” Nigel continued to push through the crowd.

Cassie felt a sharp urge to speak up for the woman, but she ignored it. She wasn’t being harmed, and Cassie knew that. But her youth, and the dominance of the man who guided her, reminded her of just how young she was when she had met her husband, and how she had no idea what she was in for at the time. Nigel’s fancy suit and arrogance reminded her of her own late husband’s expensive clothing and jewelry, things she had never seen in the small town she grew up in. She’d been dazzled by his wealth and confidence, and also intimidated by it.

“Cassie?” Sebastian placed a light kiss on her cheek. “Are you alright?”

“Fine.” Cassie smiled, then looked up at the sky again. “So, when will we know who wins?”

“Once the balloons land, they measure the distance between the markers and the center of the target. I guess that’s when we’ll find out.” Sebastian squinted against the sun. “They have to take precise measurements.”

“Interesting.” Cassie grinned. “I bet things will be tense while that is happening.”

“I’m sure they will be.” Tessa stepped up beside her.