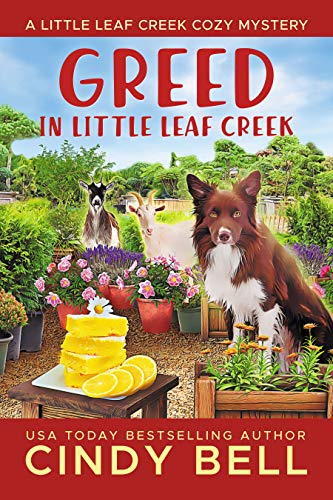 Cassie Alberta is loving her new life in Little Leaf Creek. She is becoming part of the community, has a new romantic interest and is enjoying fixing up her farmhouse. She loves living next to her new best friend Harry, a Collie mix, and two naughty goats. But it's not all a bed of roses when there is a murder at the local garden center.

Cassie and her grumpy ex-cop next-door neighbor join forces and lend a helping hand to try to find the killer. But they have a lot of digging to do and uncover more than they bargained for.

Will Cassie find the murderer before she lands up buried herself?

Greed in Little Leaf Creek is the fast-paced sixth book in the Little Leaf Creek Cozy Mystery Series. If you like unexpected twists and turns, lively personalities, and a never-ending list of suspicious characters, then you'll love Cindy Bell's heartwarming whodunnit.

Early morning sunshine warmed Cassie Alberta’s shoulders through her t-shirt. Her fingers sank deep into the moist dirt. She glanced over at the man who knelt in the dirt beside her. Sunlight played along the strands of blond hair that peeked out from under his baseball cap. Her thoughts wandered to the moments she’d shared with him that morning over coffee. The way he’d looked at her with a mixture of determination and admiration reminded her that while she wasn’t sure what to call their relationship, he had declared himself ‘all-in’.

“Caught you.” Sebastian Vail grinned as he met her eyes.

“What?” Cassie blinked, then looked back down at the dirt.

“You were captivated by my beauty, weren’t you?” Sebastian nudged her with his shoulder as he laughed.

“It’s not my fault you’re so handsome.” Cassie shrugged as she smiled back at him. “It’s downright distracting.”

“Try stepping into my shoes. I’ve been pretending to pull weeds all morning just to be close to you.” Sebastian shifted closer to her. “Any excuse I can find, I’ll take it.”

“You’ve done a pretty good job.” Cassie eyed the pile of weeds beside him.

“Okay, it’s true, I was trying to impress you. Did it work?” Sebastian raised his eyebrows.

“You have a little something, some mud, right there.” Sebastian looked at her as he swept the thumb of his glove along the curve of her cheek.

“Thanks.” Cassie smiled as she tipped her head to the side. “Did you get it?”

“I’m afraid I might have made it worse.” Sebastian laughed as he pulled his glove off. “Here, let me try again.” He wiped her cheek with his warm hand.

When Sebastian leaned in for a kiss, she laughed and ducked away from his lips. “We’re never going to get the garden ready if this keeps up.”

“I can’t help it.” Sebastian sighed as he rocked back on his heels. “The way you look in the sunlight, you’re just so beautiful.”

“Oh sure.” Cassie gave him a playful shove that knocked him back into the dirt. “Covered in dirt, and sweat, quite beautiful.”

Sebastian grabbed her hand and tugged until she fell, laughing. “Stunning, actually.” He smiled. “The weather will be nice all weekend, we can take a little break, can’t we?”

“We have to pick up the plants, remember?” Cassie laughed, then got to her feet. As she dusted dirt from her jeans, she surveyed the soil they had been preparing all morning. “It’s looking really good, right?”

“Yes, it is.” Sebastian stood up beside her. “You’re going to love it.”

“I’m sure I will.” Cassie smiled. “Thanks for all of your help with this, Sebastian.”

“Nothing I’d rather be doing.” Sebastian looked at his watch. “You’re right, though, we should probably pick up the plants. The nursery gets so busy as the day goes on.”

“Oh, no you don’t!” Cassie looked toward two goats on the other side of the fence that separated her property from her neighbor’s, as they began to paw at the ground. “You two are not going to feast on my flowers, understand?”

“Don’t worry, Harry will get them.” Sebastian laughed as the collie mix charged off of the back porch and began to bark at the goats.

The goats bleated and bolted around the side of the house.

Seconds later, the goats had circled the house, and ran up right behind Harry. Gerry, the bigger of the pair, butted the dog’s backside. Harry yelped with surprise and ran up the steps onto the back porch.

“Then again, maybe not.” Sebastian grinned. “I guess we’re going to have to think about ways to keep them out of the garden. But I don’t think goats can really dig under fences. They are probably just trying to make a cool bed for themselves. But you never know with those two.”

Harry growled as he ran back down the stairs and chased the goats again.

“Those two are so clever, I’m not sure there’s anything that will work.” Cassie followed Sebastian to his pickup truck.

“We’ll think of something.” Sebastian winked at her.

As Sebastian started the engine he pursed his lips, then shook his head.  “We might not be able to order plants from this nursery much longer.”

“What? Why not?” Cassie glanced over at him.

“I’ve heard some rumors about Gavin wanting to sell the place. I guess he is ready to move on to something new. I’m not sure about his brother Monty, though. As far as I can tell he has always loved the nursery.” Sebastian stepped on the gas. “All I know is that there is a big chain making them a pretty sweet offer.”

“A chain?” Cassie scrunched up her nose. “There aren’t too many of those in Little Leaf Creek, are there?”

“No, there aren’t. I don’t think there’s any, actually. For two reasons. The people here don’t want chain stores, and they show that by supporting the locally owned shops. And, big chains don’t want to operate here, because there aren’t enough people. I guess when it comes to running a nursery, though, this would be a good place, since there are so many farms and large properties around.” Sebastian turned down the street that led to the nursery. “Of course, the chain isn’t the only one that’s interested. My friend Bo, he runs a farm on the other side of town, he’s very interested in buying the place. It has sentimental value to him. His grandfather used to own it, but had to sell it years ago because he got into financial trouble. Bo has been waiting for the opportunity to buy it. He thinks it’ll be a good option for him, once he lets his sons take over his farm and he can slow down a bit.”

“I bet it would be.” Cassie smiled as she caught sight of the brightly painted building ahead of them. “I hope whoever buys it doesn’t change a thing about it. I love all of the murals of flowers painted on the outside.”

“That was a bit of a fight in itself.” Sebastian parked the truck. “Trust me, the historical society wasn’t fond of the splashy colors.”

“I bet they weren’t.” Cassie rolled her eyes. She had encountered the historical society a few times since she had moved to Little Leaf Creek, and they were not easy to please, or work with. “But I’m sure that they won’t be happy with the idea of a chain store coming in and taking over, either.”

“You’re right about that.” Sebastian stepped out of the truck, then walked around the front to meet her.

“I’m excited to see what you picked out for the garden.” Cassie smiled as he took her hand.

“Do you trust me?” Sebastian grinned as he looked into her eyes.

“Of course I do.” Cassie’s heart fluttered as she recalled the moment she’d accidentally mentioned that she loved him. He hadn’t pressed her on it since, but it was still very much on her mind. Although, she did have strong feelings for him, her confession had surprised her as much as it surprised him.

“We’ll see how well that works out for you.” Sebastian laughed.

As Sebastian led her into the nursery, Cassie expected to see an assortment of seed packets on a turnstile right by the door. Usually, she enjoyed flipping through them just to see the wide variety of plants they could produce. However, the usually well-organized packets weren’t on the turnstile. In fact, they had been scattered all over the floor, and the turnstile itself had been shoved into one of the shelves containing bags of soil.

“Sebastian?” Cassie looked at him as he took a sharp breath.

“What happened here?” Sebastian’s eyes widened at the sight of the products strewn all over the tile floor.

“The register’s open!” Cassie gasped as she spotted it hanging open behind the counter. “Sebastian, I think there’s been a robbery!”

“Monty?” Sebastian rushed up to the counter and looked behind it. “He’s not back here! The register’s empty!”

Before the call could connect, a bloodcurdling scream carried through the nursery, from the open back door.

“Help!” A woman pleaded from outside. “Someone, please help!”

Sebastian looked straight into Cassie’s eyes. “Wait here!” He turned and ran toward the door.

Cassie followed right behind him. She doubted that he expected anything different.

As Sebastian stepped through the door, he gasped.

Cassie blinked as she realized that Oliver had answered, she still had the phone pressed against her ear.

“Ollie, there’s been a robbery at the nursery.”

“More than a robbery.” Sebastian’s voice wavered as he stepped closer to her, then draped an arm around her shoulders. “There’s been a murder!”

Cassie dropped the phone as her mind spun. She saw a woman on her knees, leaning over a man sprawled out on the ground. Her eyes were immediately drawn to his blood-stained shirt.

“Monty, oh Monty!” The woman rocked back as she wailed again. As Cassie focused she recognized her as Avery, from the historical society. “Who would do this to him?”

The pain in Avery’s eyes summoned Cassie out of her shocked state. She pulled away from Sebastian and went to the woman’s side.

“I’m so sorry.” Cassie wrapped her arms around her and tried to pull her gently away from Monty’s body. “Are you hurt? Did you see what happened?”

Sebastian picked Cassie’s phone up out of the dirt and began giving Oliver more details about the crime.

Avery looked into Cassie’s eyes. “I just found him like this.” She drew a sharp breath. “I just came in to get a plant. Just one plant. Something to brighten up my porch.” She clutched Cassie’s hand. “How could this happen here? Little Leaf Creek is such a safe place.”

Cassie frowned as she hugged her again. If there was one thing Cassie had learned about Little Leaf Creek since she moved there, was that it had its fair share of crimes. It was certainly not the first body Cassie had stumbled upon in Little Leaf Creek.