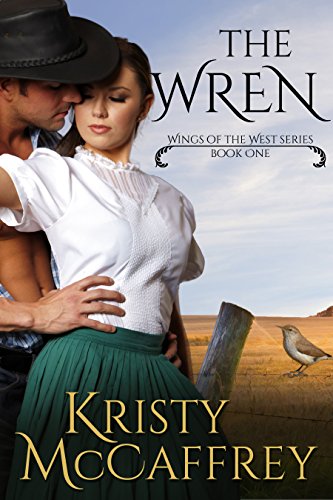 “A rousing, spicy story of long lost love in the gritty Old West. The Wren will make your pulse flutter and your heart sing.” —Ann Charles, USA Today Bestselling Author of the Award-winning Deadwood Mystery Series

Ten years have passed since Molly Hart's ranch was attacked, her folks murdered, and she was abducted. Now, at nineteen, she's finally returning home to North Texas after spending the remainder of her childhood with a tribe of Kwahadi Comanche. What she finds is a deserted home coated with dust and the passage of time, the chilling discovery of her own gravesite, and the presence of a man she thought never to see again.

Matt Ryan is pushed by a restless wind to the broken-down remains of the Hart ranch. Recently recovered from an imprisonment that nearly ended his life, the drive for truth and fairness has all but abandoned him. For ten years he faithfully served the U.S. Army and the Texas Rangers, seeking justice for the brutal murder of a little girl, only to find closure and healing beyond his grasp. Returning to the place where it all began, he's stunned to encounter a woman with the same blue eyes as the child he can't put out of his mind.

“The main characters were well matched and the secondary characters were just as good. Don't miss this incredible read in what is sure to be a great series to follow.” ~ The Romance Studio

“...well written...captivated me from the first line to the poignant last.” ~ Novelspot

Startled, the woman turned in her saddle and glared wide-eyed at him. Beneath the brim of her dark hat, vibrant blue eyes watched him.

In this isolated corner of the Texan plains, the last thing Matthew Ryan expected to find was a lone woman atop a horse, staring at the three gravesites nestled into the hillside. A vision of a girl from long ago, her blue eyes just as vivid, flashed in his head. A lifetime had passed since that August night when he last saw Molly Hart on this earth. The loss, only a dull ache now, never fully seemed to leave him.

“No, I’m not lost,” she answered. Her voice was rich and layered, and slid around him like a warm fire after a cold spell.

“You’re a long way from nowhere,” he said, shifting in his saddle and adjusting his hat as a gust of wind blasted them. A storm brewed, teasing the land with its ever-increasing presence. Dark clouds pressed low on the horizon, and Matt suspected that soon neither he nor the woman would be riding far. He ought to leave now.

“Did you know the Hart family?” He inclined his head toward the graves.

The woman turned away from him and nodded almost imperceptibly. Strands of dark hair escaped the confines of her hat.

“My name is Matt Ryan.” He scanned the small, enclosed valley and the dilapidated house about a quarter-mile away, the remnants of the Hart Ranch. A corral, stables, and bunkhouse also still stood, overrun by tumbleweeds and dust, ghostly sentinels of a once-vibrant place. “My family has a ranch about thirty miles east of here.”

When his gaze settled back on the woman from nowhere, he found her staring at him in genuine shock. “What’s wrong?” he asked immediately.

Her horse, a fine-looking chestnut mare—the hue almost the same shade as the mystery woman’s hair—pranced nervously in response to her rider’s agitation.

“Have we met before?” he asked.

Instead of answering, the woman questioned him again. “How did the Hart family die? How did Molly Hart die?”

Matt paused. It had been ten years since he’d been to this place, ten years since the funeral when the three graves had been dug and the murdered bodies laid to rest. Was he a coward for not visiting sooner? He wasn’t sure. All he knew was Molly Hart’s death weighed on him still, like a vice around his guilty conscience for not staying with her that night.

“About ten years ago, the ranch was raided during a party. Mr. and Mrs. Hart were killed. Molly disappeared.” His tone was even, a mannerism honed during his years in the army and the Texas Rangers. Hiding his emotions had become second nature, a useful trait in his line of work. But at what cost, he sometimes wondered.

“And that made you think she was dead?” Distress played across the woman’s face.

“We didn’t. Not at first. Not until we found her.”

“What exactly did you find?”

Wind whistled through the valley and black thunderclouds formed quickly overhead. It was said if you didn’t like the weather in this part of Texas then just wait five minutes. It often changed that swiftly. He and the woman needed to find shelter.

Reluctantly, he pushed his mind to answering her. “A badly burned body.”

The woman struggled to rein in her horse when a lightning bolt shot out of the sky. “How could you be certain it was her?” she demanded.

“A small gold cross she always wore was found near the body. And the remains…were the right size.”

She turned back to the graves, giving Matt a view of her profile. Though she was dressed like a man in dark trousers and an oversized pale shirt, it was still obvious she was a young woman. Slender hands grasped her horse’s reins and a pleasing feminine arc graced her posture. Despite the animal’s uneasiness, it was apparent she had a natural instinct in the saddle.

“What’s your name?” he asked loudly, to be heard over the howling wind.

She nailed him with a look of distrust, disbelief and…abandonment? The thought baffled him.

Rain began to pour down in sheets.

“Let’s get down to the house,” he yelled, immediately guiding his horse down the slight slope they currently occupied. Over his shoulder he saw the woman hesitate, glancing at the broken-down remains of the ranch house with fear in her eyes.

But when he arrived at the deserted dwelling, she was right behind him. “I’ll take the horses to the stables and see if I can find a dry spot for them.” He pulled his saddlebags, then hers, from the animals and handed them to her. “Why don’t you go inside and see if there’s a place where we can wait this storm out.”

While he tended to the horses—the stable was in better shape than he would’ve thought—he wondered about the woman and how she could have known the Hart family. Ten years ago she would have been just a child, probably not much older than Molly herself, and Matt was certain he would’ve remembered her. The summer the Harts were killed he had worked at their ranch, helping out Robert Hart at his pa’s request.

It was during that time Matt’s friendship with nine-year-old Molly had blossomed. On the surface they’d appeared mismatched—he was eight years her senior—but their easy camaraderie put him in mind of a sister he’d never had. The little sprite had worked her way into his heart in no amount of time, and he became her friend and protector. But it was in that last role that he failed, and even today the cost was almost more than he could bear.

Running through the rain, he nearly barreled into the woman in the front entryway. He wondered if she’d moved since entering the house. Immediately he pulled his six-shooter, scanning for a wild animal that might’ve taken refuge from the storm as well.

Reaching out, he touched her arm.

“Easy,” he murmured, gently moving her aside. Walking through the house, he inspected every room. Water leaked in several places, but luckily there was no sign of anyone, or anything, else. “The back bedroom seems dry.”

Instead of following him, the woman with the penetrating blue eyes and intriguing voice paused at the threshold of a different bedroom.

Matt frowned. When did he begin thinking of her as intriguing?

From the end of the hallway where he stood, a flash of lightning suddenly illuminated the almost-darkened house. The rain had plastered the woman’s pale shirt to her, clearly outlining her very feminine curves. Matt forced himself to look away. He wasn’t of a mind to take advantage of a lone female in the middle of nowhere.

She disappeared into the bedroom. He removed his hat and ran fingers through damp hair. Attraction or not, there was something strange about this woman. He followed behind her.

“Do you know what happened to Mary and Emma?” she asked softly, her back to him.

So, she knew of Molly’s two sisters. “They went to San Francisco to live with their Aunt Catherine.”

A quick exhalation, and her shoulders relaxed slightly. Bending down, she retrieved an old, filthy doll. “This was Emma’s,” she whispered.

“How is it you know so much about the family who lived here?” Matt asked, suddenly frustrated with this woman he hardly knew. “Who are you?”

As she turned to face him, a bright flash of light revealed tears running down her face. “I could tell you, but I think now you won’t believe me. I’ve been such a fool, thinking I could come back, that everything would be the same.” Staring at the doll in her hands, she said quietly, “A lifetime lost, for all of us.”

“What is your name?” Matt demanded, feeling an uneasy sensation in his gut. It couldn’t be, it really couldn’t. It wasn’t possible.

Even as she spoke, his mind and heart railed against it.

Her richly textured voice floated through the clash of rain and distant thunder.