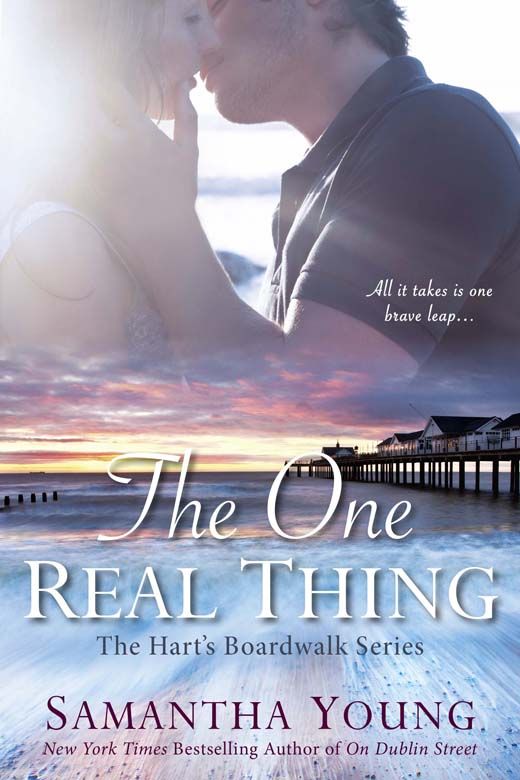 “Young has done it again. Sexy chemistry and gut-wrenching emotions kept me turning the pages!”

The New York Times bestselling author of On Dublin Street is back with the first in a sexy new romance series set in a small town on the Delaware coastline.

Welcome to Hartwell, a quiet seaside escape where uncovering old secrets could lead one woman to discover the meaning of a love that lasts…

While Doctor Jessica Huntington engages with the inmates at the women's correctional facility where she works, she's always careful to avoid emotional attachments in her personal life.  Loss and betrayal taught her that lesson long ago. But when she comes across a set of old love letters in the prison's library and visits the picturesque town of Hartwell to deliver them to their intended recipient, she finds herself unable to resist the town's charm--and her attraction to the sexy owner of a local bar proves equally hard to deny.

Since his divorce from his unfaithful ex-wife, Cooper Lawson has focused on what really matters: his family and the boardwalk pub they've owned for generations.  But the first time Jessica steps into his bar, Cooper is beyond tempted to risk his heart on her.

Yet as their attraction grows hotter and Jessica remains stubbornly closed off, he begins to realize it will take more than just passion to convince her there's only one real thing in life worth fighting for… 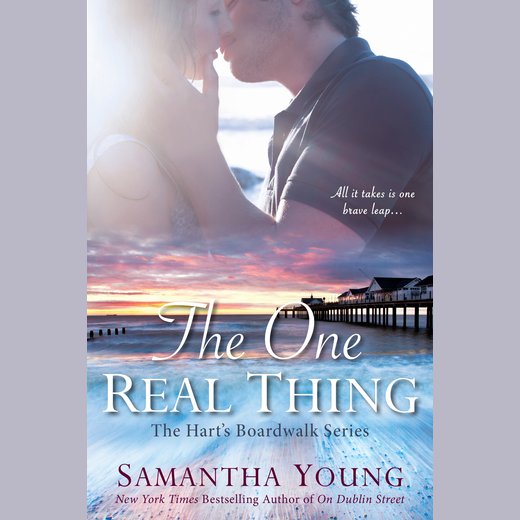 One of my favorite feelings in the whole world is that moment I step inside a hot shower after having been caught outside in cold, lashing rain. The transformation from clothes-soaked-to-the-skin misery to soothing warmth is unlike any other. I love the resultant goosebumps and the way my whole body relaxes under the stream of warm water. In that pure, simple moment all accumulated worries just wash away with the rain.

The moment I met Cooper Lawson felt exactly like that hot shower after a very long cold storm.

The day hadn’t started out all sunshine and clear skies. It was a little gray outside and there were definite clouds, but I still hadn’t been prepared for the sudden deluge of rain that flooded from the heavens as I was walking along the boardwalk in the seaside city of Hartwell.

My eyes darted for the closest available shelter and I dashed toward it—a closed bar that had an awning. Soaked within seconds, blinded by rain and irritated by the icky feeling of my clothes sticking to my skin, I wasn’t really paying much attention to anything else but getting to the awning. That’s why I ran smack into a hard, masculine body.

If the man’s arms hadn’t reached out to catch me I would have bounced right onto my ass.

I pushed my soaked hair out of my eyes and looked up in apology at the person I had so rudely collided with.

Warm blue eyes met mine. Blue, blue eyes. Like the Aegean Sea that surrounded Santorini. I’d vacationed there a few years ago and the water there was the bluest I’d ever seen.

Once I was able to drag my gaze from the startling color of those eyes I took in the face they were set upon. Rugged, masculine.

My eyes drifted over his broad shoulders and my head tipped back to take in his face because the guy was well over six feet tall. The hands that were still on my biceps, steadying me, were big, long-fingered, and callused against my bare skin.

Despite the cold, I felt my body flush with the heat of awareness and I stepped out of the stranger’s hold.

“Sorry,” I said, slicking my wet hair back, grinning apologetically. “That rain came out of nowhere.”

He gave a brief nod as he pushed his wet dark hair back from his forehead. The blue flannel shirt he wore over a white T-shirt was soaked through too and I suddenly found myself staring at the way the T-shirt clung to his torso.

There wasn’t an ounce of fat on him.

I thought I heard a chortle of laughter and my eyes flew to his face, startled, and horrified at the thought of being caught ogling. There was no smirk or smile on his lips, however, although there was definitely amusement in those magnificent eyes of his. Without saying a word he reached out for the door to the quaint building and pushed. The door swung open and he stepped inside what was an empty and decidedly closed bar.

Okay for some, I thought, staring glumly out at the way the rain pounded the boardwalk, turning the boards slick and slippery. I wondered how long I’d be stuck here.

“You can wait out there if you want. Or not.”

The deep voice brought my head back around. Blue-eyed, rugged flannel guy was staring at me.

I peered past him at the empty bar, unsure if he was allowed to be in there. “Are you sure it’s alright?”

He merely nodded, not giving me the explanation I sought for why it was alright.

I stared back at the rain and then back into the dry bar.

Stay out here shivering in the rain or step inside an empty bar with a strange man?

The stranger noted my indecision and somehow he managed to laugh at me without moving his mouth.

It was the laughter-filled eyes that decided me.

I nodded and strode past him. Water dripped onto the hardwood floors but since there was already a puddle forming around blue-eyed, rugged flannel guy’s feet I didn’t let it bother me too much.

His boots squeaked and squished on the floor as he passed me; the momentary flare of heat from his body as he brushed by caused a delicious shiver to ripple down my spine.

“Tea? Coffee? Hot cocoa?” he called out without looking back.

He was about to disappear through a door that had ‘STAFF ONLY’ written on it, giving me little time to decide. “Hot cocoa,” I blurted.

I took the seat at a nearby table, grimacing at the squish of my clothes as I sat. I was definitely going to leave a butt-shaped puddle there when I stood up.

The door behind me banged open again and I turned around to see BRF (blue-eyed rugged flannel) guy coming toward me with a white towel in his hand. He handed it to me without a word.

“Thanks,” I said, bemused when he just nodded and headed back through the ‘STAFF ONLY’ door. “A man of few words,” I murmured.

His monosyllabic nature was kind of refreshing actually. I knew a lot of men who loved the sound of their own voice.

I wrapped the towel around the ends of my blonde hair and squeezed the water out of it. Once I had rung as much of the water from my hair as I could, I swiped the towel over my cheeks only to gasp in horror at the black stains left on it.

Fumbling through my purse for my compact, I flushed with embarrassment when I saw my reflection. I had scary black-smeared eyes and mascara streaks down my cheeks.

No wonder BRF guy had been laughing at me.

I used the towel to scrub off the mascara, then, completely mortified I slammed my compact shut. I now had no make up on, was flushed red like a teenager, and my hair was flat and wet.

The bar guy wasn’t exactly my type. Still, he was definitely attractive in his rough-around-the-edges way and well, it was just never nice to feel like a sloppy mess in front of a man with eyes that piercing.

The door behind me banged open again and BRF guy strode in with two steaming mugs in his hands.

As soon as he put one into mine, goosebumps rose up my arm at the delicious rush of heat against my chilled skin. “Thank you.”

He nodded and slipped into the seat across from me. I studied him as he braced an ankle over his knee and sipped at his coffee. He was casual, completely relaxed, despite the fact his clothes were wet. And like me he was wearing jeans. Wet denim felt nasty against bare skin— a man-made chafe monster.

“Do you work here?” I said after a really long few minutes of silence passed between us.

He didn’t seem bothered by the silence. In fact he seemed completely at ease in the company of a stranger.

I looked around at the bar. It was a traditional décor with dark walnut everywhere—the long bar, the tables and chairs, even the floor. Three large brass chandelier lights broke up the darkness, while wall mounted green library lamps along the back wall gave the booths there a cozy, almost romantic vibe. There was a small stage near the front door and just across from the booths were three stairs that led up onto a raised dais where two pool tables sat. Two huge flatscreen televisions, one above the bar and one above the pool tables, made me think it was part sports bar.

There was a large jukebox beside the stage that was currently silent.

His eyes smiled. “Are you a detective?”

I was pretty sure I saw a flicker of interest. “Really?”

Laughter danced in his eyes as he raised his mug for another sip.

Weirdly, I found myself settling into a comfortable silence with him. We sipped at our hot drinks as a lovely easiness fell between us. I couldn’t remember the last time I’d felt that kind of calm, contentedness with anyone, let alone a stranger.

A little slice of peace.

Finally as I came to the end of my cocoa, BRF guy/possibly Cooper spoke. “You’re not from Hartwell.”

“What brings you to Hart’s Boardwalk, Doc?”

I realized then how much I liked the sound of his voice. It was deep with a little huskiness in it.

I thought about his question before responding. What had brought me here was complicated.

“At the moment the rain brought me here,” I said coyly. “I’m kind of glad it did.”

He put his mug down on the table and stared at me for a long beat. I returned his perusal, my cheeks warming under the heat of his regard. Suddenly he reached across the table, offering me his hand. “Cooper Lawson.”

I smiled and placed my small hand in his. “Jessica Huntington.”