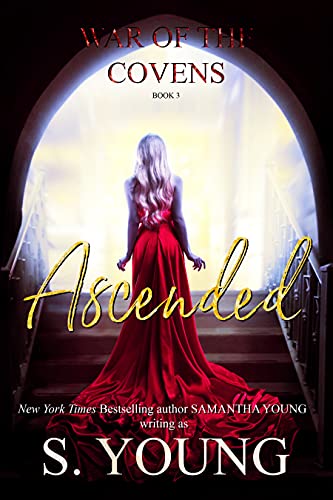 Previously released under the title 'Blood Solstice (Tale of Lunarmorte #3) in 2011.

In the final instalment of War of the Covens, Caia is caught between the most powerful beings in her world, and they are all desperate to use her for their own means. While Caia struggles to find her purpose, tragedy strikes close to home, and time runs out.

Now she must decide if she will join the extremists she was trying to destroy. Or bring them all down on her own terms...

The Why and the Wherefores

Existing in the shadows of our world are supernatural races; children blessed by the ancient Greek gods with unimaginable gifts, and at present they are fighting a two-thousand year old war with one another. The Midnight Coven, an alliance of dark magiks, faeries, and daemons born of black magik, believe that vampyres and lykans are lesser supernaturals and a threat to mankind. They are at war with the Daylight Coven, a confederate of light magiks, faeries, vampyres and lykans who believe in the equality of the races.

Into this war eighteen year old Caia Ribeiro is born… a lykan with a heritage unlike any other. A consequence of the manipulation of the gods and fate, Caia is unique – a half-lykan, half-water magik. And to make it even more complicated her mother was the daughter of the Head of the Midnight Coven – Caia is half-Daylight, half-Midnight.

Since her visit to the Centre, the Daylight’s headquarters and training institution, Caia’s world has been turned upside down. Not only is she convinced that many Midnights are good people looking for a way out of the war, she acted on that conviction by orchestrating the escape of a young Midnight girl, Laila, from Daylight prison. To make matters worse, Caia discovered that Marita, the Head of the Daylight Coven, was abusing her power by experimenting on lykan children in order to breed a stronger army, and the one person she wants to complete that experimentation is Caia’s best friend, Jaeden – a lykan with telekinetic abilities. Her fear over telling Lucien, her mate, all she had discovered, was unfounded, and Caia has at last a group of loyal supporters, despite Pack Errante’s misgivings over her revelations. However, with Marita growing steadily more unstable, imprisoning the Council and turning the Coven into an autocracy, it seems likely that they will have to turn to Caia for guidance.

But slithering in the shadows of their conflict is a being with a far bigger part to play than he’d let on. Who is Jaeden’s friend, the vampyre Reuben, really? Why does he seem so chummy with Nikolai, the Regent of the Midnight Coven, when they’re supposed to be blood enemies?

And why oh why has their friendly neighbourhood vampyre kidnapped Caia?

Caia: the one person they need to rescue the Council and bring the Coven back from the brink of disaster.

He hunkered down on to his haunches so they were face to face. His smile disappeared as he winced. “I’m sorry I hit you so hard. I wasn’t sure how much strength I would need to put into it to knock you out. However… you’re pretty fragile for a lykan.”

A growl rumbled from the pit of Caia’s chest and erupted into snarling snaps. She had never wanted to tear at someone the way she wanted to at Reuben.

He didn’t flinch. He just gazed at her with a look almost akin to sadness. “We don’t want you in this cage, Caia. You’re just there until we’re sure you aren’t going to attack Nikolai. We don’t want to hurt you.”

She guffawed. “Hurt me? I’d be worried for myself if I were you.”

He frowned at her. “Caia, please don’t try anything foolish. You’ve been out for 24 hours, you’re very weak.”

24 hours? How was that possible?

“Again, apologies for my friend’s overzealousness.” Nikolai was glaring at Reuben.

Her gaze flew between the two of them, searching desperately for any clue as to why they had her here. She had been gone a day. Lucien would be going crazy, not to mention Jaeden and Ryder and everybody…

“Jaeden,” she snapped at Reuben. “She trusted you.”

His face remained expressionless. “I needed her. So I fudged a little with the truth. She can still trust me.”

Caia snorted. “Oh yeah, cos’ kidnapping her Alpha’s mate is such a trustworthy thing to do.”

He nodded, his eyes telling her understood her anger. She didn’t want his damn understanding.

“Perhaps you will allow me to explain myself?” He queried softly, a whisper of regret lacing his words. She broke eye contact, her gaze darting pointedly around the cage. “I’m not exactly going anywhere.”

Reuben smirked and stood up, his eyes locked to her face. “Nikolai, a chair perhaps?” Instantly a comfortable armchair appeared behind him and he sank into it whilst Nikolai stood vigilant at the back of him. “We need you, Caia… to end the war.”

Caia chuckled. Of course he did. And what did he think? That she would blithely follow his orders when she was doing everything in her power to remove herself from Marita’s rule? “I have no intention of fighting for the Midnights. Nor the Daylights. That’s not my plan.”

“Well, it would seem we agree on that much, but your actual plan is crumbling around you as we speak.”

She frowned at him. “What do you mean?” What the Hades did he know about her plan?

“Marita has dissolved the Council and imprisoned them.”

How on Gaia’s green earth did he know that? Her expression must have asked as much because he shrugged elegantly, crossing one leg over the other and relaxing into his chair. “I have important assets inside the Centre.”

Her mouth fell open and a riot of butterflies exploded into life in the bottom of her belly. She had no idea who she was dealing with here, but the fact that he had assets inside the Centre… “What do you want from me?”

Reuben sighed heavily, wearily. “I want what you want. I don’t want to kill Daylights or Midnights. I just want this war to end… and I’ve been working on bringing it to a conclusion long before you were ever born.”

“And I’ve just to believe that, have I?” She sneered, the dull throbbing in her head growing worse.