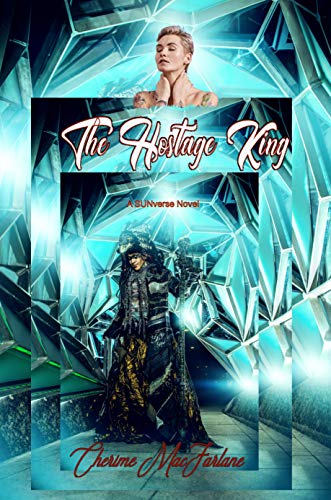 He can't leave his world; she won't be tied to a planet again. The Shaman-king and the mercenary.
Her ship is her life. She almost sold her soul to get it. The job she took should be an in and out, easy money. Zoom over to planet SW 858, grab a sample of the metal a scout discovered and head home. There's one minor problem. The planet isn't uninhabited. Silver must be careful. The Mercenaries Union doesn't like adverse publicity.
The shaman king knows she's on the way, the spirits warned him. With the Distani discovered, he must plot a course which will bring about their ultimate aim. A secret which could cost them the home they love must remain hidden. He needs the woman, for himself and for the planet he would destroy... if he must.

Total absence of light… as always. Before him, the steady drip… drip… drip of water into the upper pool gave him something to focus on. As it had for generations of his kin before him. The first to come here had been a grandmother so great, one must tick them off on their fingers. He had no need to do so. The names, both female and male, rested in memory.

This recalling, speaking each name from the first to his tenure, grounded him, a thing he needed desperately. Change coming woke something in him, a quivering in his soul which warned them all. A bird in a gilded cage, he sensed that which could harm them and sought it out.

For this purpose, he sat cross-legged on the cool rocks which ringed the lower pool. A natural cube of metal warned one palm; a crystal chilled the other. Extending his open right hand, he held the crystal with two fingers and balanced its point on the top of the cube.

The resulting light always caused him to jerk. No matter that he knew what must come, it startled him each time. His eyes went straight to the still pool of water before him. The first image on the dark surface was no surprise—a ship bearing the markings of the Mercenary’s Union. The next image, a woman in command of the ship, froze him in place.

His fingers trembled. Tightening his hold so he wouldn’t drop the precious crystal into the bottomless pool, his breath whistled out of him. Why hadn’t he taken a consort? The answer to the question had eluded him for years. A face as light as he was dark stared at him from the placid surface and gave the answer. He waited for her.

Change was coming for them. She would bring it, along with much strife and trouble. It would be his task to win her. To add her genes to the bloodline. Better yet, if he succeeded, all the fierce pride he saw in her face would be his. A worthy quest for the king of the Distani.

The vision vanished. The light died when he separated the crystal and its energizer, the cube. Left in complete darkness again, he still sat in the same place. The steady drip of water seemed louder as he tried to calm his mind and chart a course to save Nizad and his kin. She would see through subterfuge. What he planned must have a kernel of truth to it.