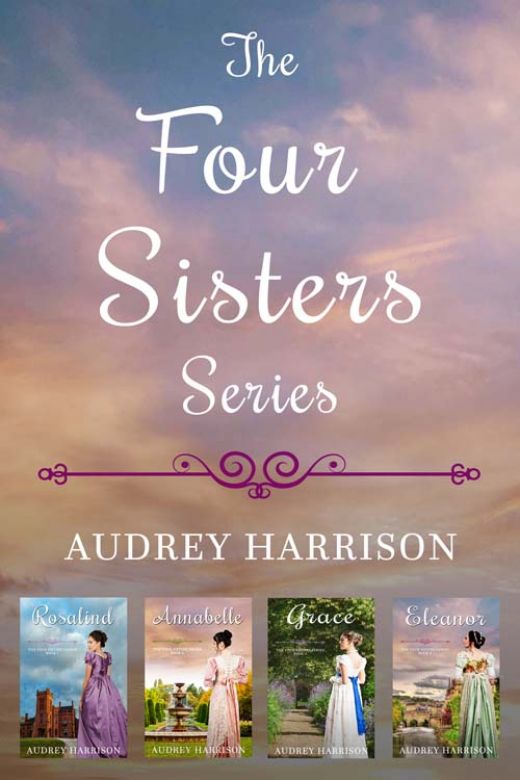 This book contains all four of the Johnson sisters books which are available separately as ebooks and paperbacks.

Book 1 - Rosalind - Peter Gilbert, Duke of Sudworth is a good man, but at the moment he's angry and very very bitter. He has inherited the title and the debt that the selfish lives of his deceased brother and father created. Facing bankruptcy, he has determined to keep his heritage at whatever cost. Only those closest to him know the real reason he is desperate to save his family home - the member of his family his father was ashamed off.

Rosalind Johnson, is the eldest daughter of a 'cit', a man who has earned his fortune through business. As an ambitious father he is determined that his four daughters will marry the highest titles in the country, whether they like it or not, and he is prepared to pay to achieve his goal. Rosalind has no choice to marry a stranger and take on a life and Society that looked down on someone who came from trade. She would need all her resourcefulness to cope.

Two people forced together because of circumstances that they did not create would be set for a shaky start at best, but with local gossip, illegitimate children and an alleged affair, things were never going to be quiet in the home of the Duke and Duchess of Sudworth.

Book 2 - Annabelle - Annabelle Johnson has a secret. It could ruin her. But yet, she remained in a darkened room with a gentleman. Perhaps it was because for the first time she felt safe in a gentleman’s company.

Compromised and hiding a damning secret was never going to be a good mix. Annabelle had to think of something before her secret ruined her and hurt the man she had married.

Lord Stannage, Earl of Garston was a handsome man. A pity then that everyone who met him only noticed his different coloured eyes. In a society that only perfection was accepted, he was never going to feel welcomed. He avoids society apart from when he becomes too lonely.

Two people, both hurting and afraid, needing each other’s strength before their living nightmare can ease. Will they find the courage to trust and listen to each other, or will they continue on their path to heartbreak?

Book 3 - Grace - Grace Johnson does not want to marry a titled gentleman. She is only happy and at peace when spending time in a garden - any garden. When she visits her sister, the Duchess of Sudworth, Grace is disappointed that even her beloved sister is not listening to her. Grace hates matchmaking schemes but seems powerless to stop them.

Harry Long is Head Gardener at Sudworth Hall. He is a good and loyal member of staff. The day that Grace walks into his life turns everything upside down. For the first time he is taking risks for the beautiful pixie that has walked into his life but, his actions could cost him everything.

An innocent picnic threatens Grace and Harry in ways that neither could have predicted, but their lives and the lives of those around them will never be the same because of it.

Book 4 - Eleanor - Eleanor Johnson, the youngest of the Johnson sisters, is plain. No one will ever write sonnets about her but she does not wish for sonnets; just someone to love her for herself. She has lived in the shadow of her three older, more beautiful sisters all her life. Now, not only plain she has made a fool of herself in the worst possible way.

Joseph Heaton is sick of the fickleness of society. He has become one of those in society famous for their notoriety in putting people down. He is to find that one arrogant sentence was to cost him the woman that, unwittingly had become the most important person in his life.

A chase across country; an angry father; and a man intent on having Eleanor for himself, are all hurdles that face Joseph in his quest to prove his love.
He is to face the hard lesson that sometimes, money and titles are not enough to secure everything he wants.