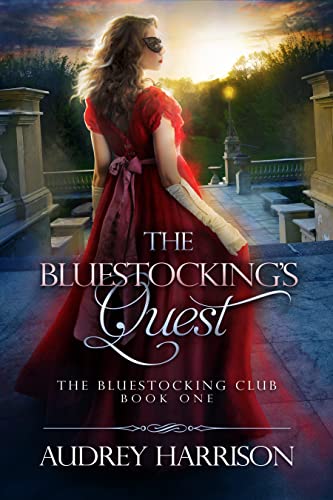 On a quest to right a wrong from the past, she did not expect to find her future.

Miss Julia Marsh is a bluestocking. She is happiest when surrounded by her dear friends in the Bluestocking Club, but she has kept a shocking secret from them. Haunted by the past, Julia risks her life to prevent others from suffering the same fate as her parents. Unfortunately, it is even harder than she imagined.

Hugh Weston, Earl of Bryn, may be a rake and a rogue, but his heart is set on redressing the sins of his father. It is all he can think of until he sees a masked woman in danger on the streets of London. A pity the ungrateful chit wasn’t happy about being rescued.

Two souls brought together, not in the ballrooms of the ton, but fighting for their lives in the less salubrious London streets. As they grapple with the twists and turns of fate, and risk the scorn of society, Hugh is convinced of one thing: there is nothing dull or wilting about this particular bluestocking.

The Bluestocking Club is a series of stories about women who are capable, intelligent and independent, and who do not need a man to prove their worth. If they find one along the way? Well, that is a bonus, but do not expect them to turn into simpering misses!

The Bluestocking’s Quest is a Regency Romance, topped with a generous amount of humour, action and tears. If you like simmering chemistry, compelling but complex characters and fast-paced action, then this is the perfect book for you.