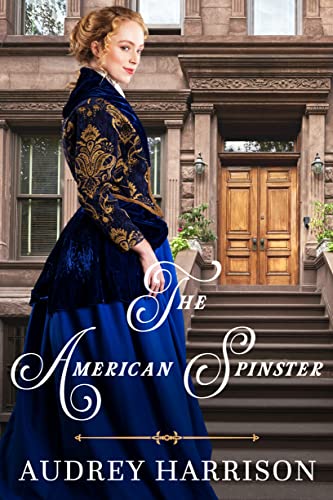 A new country. A new start. A new woman – and she’s more than a handful!

Rabbie Dinwiddie has left his beloved Scotland to start a new life in a country that offers a better and brighter future. He longs to be master of his own land and destiny, not work for someone else for the rest of his days.

But where there’s an opportunity, there are rogues, and Rabbie suffers the consequences. He never imagined he would be forced to return to Scotland poorer than when he had set out.

Miss Elisabeth Anderson is born and bred American and proud of it. Established as a wealthy farmer’s daughter, she is not limited by old world constraints and has a drive that served the early pioneers well.

Elisabeth has prospects and bold ambitions, none of which include an irascible Scot, whose path seems destined to entangle with her own.

When events occur that shatter everything Elisabeth believes in, there is only one man who can help. But is it too late to redeem what has gone before?

The American Spinster is a Victorian Romance, topped with a generous amount of humour, action and tears. If you like simmering chemistry, compelling but complex characters and fast-paced action, then this is the perfect book for you. For lovers of Regency or Victorian romance.

He was furious.
Robert Dinwiddie, Rabbie to his family and friends, strode along the pavement, not noticing who he passed or where he went. What was it about his sisters? he fumed silently to himself. Neither of them could find a husband in Scotland, and yet the minute he suggested they join him to keep house in the New World, lo and behold, they were both married within a blink of an eye.
Agnes’s feet had not even touched the ground before she was lost; she had fallen in love on her journey to Rabbie with the blasted ship’s captain of all people. At least Agnes had made an attempt to travel to him; Jane had fallen under the spell of someone she met whilst visiting another of their siblings in Manchester. Although her journey to happiness was more complicated, she had been let down badly before meeting George, who she was now besotted with if her letter was anything to go by. He was happy for his sisters, but it was still a damned inconvenience for his own situation.
A wry smile altered scowling features as he walked. He had no other unmarried sisters to persuade to come and keep house for him. Well, there was one, the eldest in the family, but she had her own business and was a little bit scary to the other Dinwiddie children. Rabbie was not going to send a letter to her. No, there had to be another way of getting the help he needed.
The grim expression soon returned; he had worked hard since he’d travelled from the small village in Scotland that his family came from. He had always been determined that the path his parents had walked was not the one he would tread. He was not going to be dependent on a landowner as his father had been.
Combined with the loss of Agnes almost as soon as she arrived in New York, and then Jane not travelling over to him after saying that she would, there had been another setback to his plans. He had wanted to buy a farm not too far from New York and neighbouring land to make the acreage even larger, but someone else had beaten him to it, offering a higher bid that he could not match. The farm needed to be as large as he could afford to give him the lifestyle he wanted, so he was back to trying to source land and save his money in the meantime. He was working hard, doing anything he could to earn as much as possible, and determined to achieve his dream.
He was going to have a better future than his parents had, but for now, he still felt on the edge of society, just as he had when living in Scotland. They had been the most prosperous family in the village after the laird, but it was still not enough to have gained acceptance in the higher circles outside their locality.
It was supposed to be easier in New York to mix with others from higher ranks, and to some extent it was. Most people did not care where your money had come from; in fact, hard work was admired, but he was a single man who needed a woman to manage his house and be the helpmate he would need on the farm. Unfortunately, there was a distinct shortage of female domestic staff, hence his sending for his sisters. He had not realised that his suggestion would result in them finding their husbands. He was pleased for them, he tried to convince himself, but…
He sighed as his shoulders slumped. There was no other option for him.
He would have to marry, but courting someone would take up time and money he could not afford to squander. He was rapidly running out of options. He had to think of something fast because he had heard of another area that was a possibility; he did not wish to lose out for a second time. He had better become more inventive and soon.