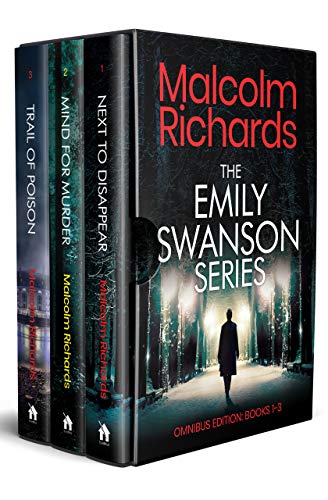 Emily Swanson made a terrible mistake that destroyed lives. Including her own.

Now she's determined to make amends by helping the helpless and solving the unsolvable – in this dark and twisty British crime series.

**This digital box set includes the first three novels: Next To Disappear, Mind For Murder & Trail of Poison, plus an exclusive short story.**

When troubled nurse Alina vanishes, it's assumed she ran away from her violent husband. Until disgraced ex-teacher Emily Swanson moves into the couple's former home. Emily's life is in ruins and she's meant to be making a fresh start. But when she learns about the missing nurse, she sees a chance for redemption.

Finding Alina could help right the wrongs of Emily's past. But what Emily doesn't know is that Alina had a horrifying secret about the care foundation where she worked. And the closer Emily gets to the truth, the closer she gets to terrible danger.

When Emily visits an isolated digital detox retreat called Meadow Pines, she's determined to overcome the ghosts of her past. Until one of the guests is found dead.

The evidence points to suicide. But when help fails to arrive and the guests start turning on each other, it's clear something is very wrong at Meadow Pines. Cut off from the outside world, Emily must race to uncover the horrifying truth... because there's a murderer at the retreat – and they're about to kill again.

When environmentalist Max Edwards is found dead on the bank of the River Thames, his widow turns to Emily for help. But as Emily investigates, a case of accidental death quickly takes a dangerous turn.

Out of her depth and with the body count rising, Emily must turn to an unlikely ally for help. Because if she doesn't uncover the truth about Max soon, more innocent people will die.

Grab this box set and start a thrilling series that will keep you guessing from the edge of your seat.