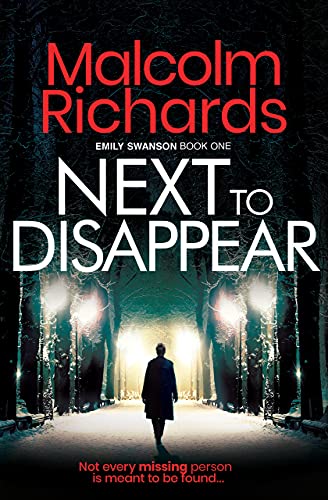 Next To Disappear: An Emily Swanson Mystery

"Electrifying... Surely should be on TV."

When troubled nurse Alina vanishes one night, it's assumed she ran away from her violent husband. Until disgraced ex-teacher Emily Swanson moves into the couple's former home.

Emily's life is in ruins and she's meant to be making a fresh start. But when she learns about the missing nurse, she sees a chance for redemption. Because finding Alina could help right the wrongs of Emily's past. All she needs to do is follow the clues.

But what Emily doesn't know is that Alina had a horrifying secret. One about the care foundation where she worked. And the closer Emily gets to uncovering the truth, the closer she gets to terrible danger.

Inspired by a shocking true crime, Next To Disappear will keep you guessing from the edge of your seat. Fans of Karin Slaughter, Angela Marsons & Gregg Olsen will enjoy this dark and twisty British series from Malcolm Richards.