She was promised to his brother for a thousand years...now he fears he'll never deserve her...

Lila, a high born aristocrat of the Vampyre kingdom, was betrothed to Sathan, King of the Vampyres, for a thousand years. The betrothal, declared by the goddess Etherya, was deemed unbreakable. Although she cared for Sathan, and loved him as her king, secretly her heart yearned for his brother. When Sathan falls for another, Lila ends the betrothal, terrified at what her life will become now that she won't be queen.

Latimus has loved Lila since they played together on the grassy riverbank as children. Knowing his brother was the better man, he never begrudged his betrothal to the woman he secretly loved. Now that Sathan has married another, Latimus becomes aware of Lila's feelings. Determined to push her into the arms of a worthier man, he believes that a war-torn army commander such as he could never offer her the life she deserves.

As the war against the Deamons rages, Latimus fights for his people, protecting them from the evil Dark Lord Crimeous. When Lila suffers a brutal attack, Latimus is shaken to his core. Resolved to avenge her, he acknowledges the emotion that has always burned for her in his blackened heart. But Lila has moved on and, as the war ensues, he worries it might be too late to claim her...

**The Etherya's Earth series is best read in order so the reader can enjoy the evolution of the characters. After all, the author loves a good twist and wants the reader to uncover them organically. However, readers of romance rest assured that each book has its own featured hero/heroine and HEA. 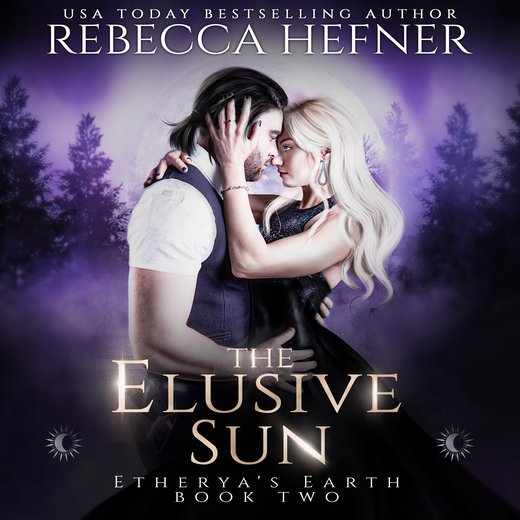 Several hours later, Latimus stood by the ballroom door, telling himself he wasn’t waiting for Lila to arrive.  His idiot younger brother had decided to throw himself a birthday party and was standing at the head of the room gyrating to some godawful music as he held headphones to one ear.

The room was filled with fifty to sixty Vampyres.  Close friends of the aristocracy, some of his soldiers and family.  Annoyed at all of them, he rested his back on the wall.  He despised social gatherings.  He’d only agreed to stop by for an hour or two because Arderin had begged him.  As the sole light of his world, he was unable to say no to his charming little sister.  Lifting his arm, he looked at his watch, hoping he’d met the minimum time requirement and could leave to find some peace.

“No way,” his sister said, bouncing up to him and grabbing his arm.  Pulling, she tried to coax him onto the dance floor.  “Please?  You never dance with me.  Just one song.  It’ll be so fun.”

Smiling in spite of himself, he grabbed her hand and twirled her around.  “There, I danced with you.  Now, go bother someone else.  I saw Naran checking you out.  He’d make a good bonded.  Go dance with him.”

“Seriously?” she asked, her expression droll.  “He’s the most boring man on the planet.  Is that the best you think I can do?  Good god.”

Latimus studied her beautiful features.  Ice-blue eyes, waist-length, curly raven-black hair.  Skin as flawless as the day she was born.  She was absolutely gorgeous, and he had a feeling she knew it.  He hoped that one day she would find a man worthy of her.  “You’re passable.  I’m sure you can find someone to dance with you.”

White teeth flashed as she gave him one of her dazzling smiles.  “You’re hopeless,” she said, swatting his chest.  “Oh, here comes Lila.  I’m out.”

Gritting his teeth, he surreptitiously glanced toward her, watching her approach.  Her scent surrounded him first.  Lavender and rose, it haunted his dreams every night.  As she neared him, he couldn’t help but admire the flare of her hips in her tight jeans.  She’d started wearing them recently, making Latimus wonder if she was secretly trying to kill him with a severe case of blue balls.

Lila was a curvaceous woman, her pear-shaped body the standard he held all other women to.  While some women longed to be skin and bones, he loved her curves and her naturally large breasts.  By the goddess, her breasts were amazing.  The tops of the ivory globes flirted with the V-neck of her thin sweater as she approached, and he felt himself grow rock hard.  Mother fucker.

“Hey,” she said, her voice so soft against his brother’s terrible music.  “So, I guess we’re traveling together to the compounds.”

“Yeah,” he said, commanding himself not to drown in those lavender eyes.  “Guess so.”

“I’m sorry” she said, shaking her head.  “I don’t know why they’re forcing this on you.  I feel terrible.”

“Forcing it on us,” he said, cursing his heart as it pounded in his chest.  “Maybe they’re trying to see how patient you really are.  A week with me is torture.”

She laughed, and his dick twitched in his pants at the sight of her white fangs.  “I’m sure it won’t be that bad.  We’ll just agree to be cordial to each other.”

“Fine,” he said, lifting his gaze to stare at the dance floor.  He just couldn’t look into those violet irises anymore.  They enthralled him.

“Oh, Arderin’s dancing with Naran.  They make a cute couple.”

“She just told me that she thinks he’s boring.  But maybe he’ll win her over.”

She chuckled as she stood beside him, both of them assessing the dance floor.

“Do you want to dance?” she asked, looking up at him from her six-foot, three-inch height.  He was half a foot taller and outweighed her by over a hundred pounds, but in that moment, he felt like she had all the power.  Locking his gaze with hers, he allowed himself for one second to imagine how it would feel, holding her in his arms and swaying to the music.  She would curve that voluptuous body around him, his erection cradled by the juncture of her thighs.

He was about to burst in his pants.  Fucking embarrassing.

“I don’t dance.  But thanks.  Camron came down from Valeria.  You should ask him to dance.  He always seems taken with you.”  Latimus had noticed on more than one occasion how the governor of the Valeria compound watched Lila.  It usually made him throb with jealousy, but since he had no claim on her, he always let it stew.

“Maybe I will,” she said, staring absently at the dance floor.  “He’s one of my oldest friends.  I’ve known him forever.”

Latimus tilted his head to look at the crown of her golden hair.  She’d known him longer than anyone.  He was pissed that she didn’t seem to remember that.  Cursing himself a fool, he noticed Darkrip stalk into the room.