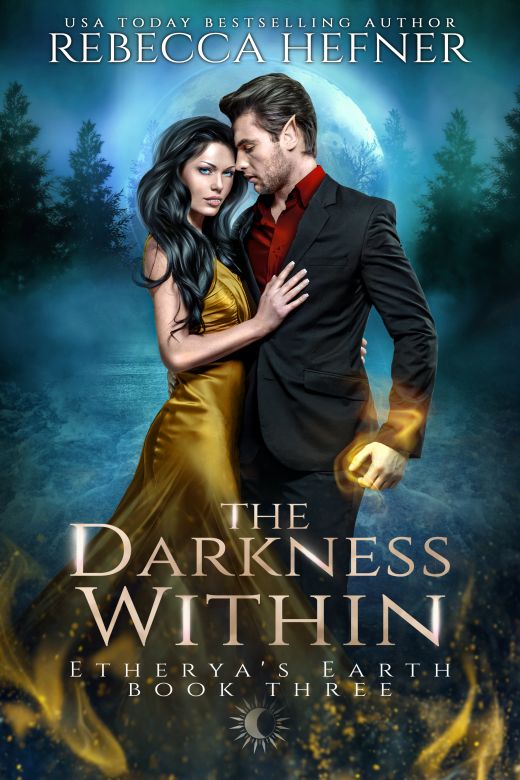 An antihero struggles to reform as he battles desire for the woman he can never have...

Arderin, princess of the illustrious Vampyre kingdom, has always marched to the beat of her own drum. Motivated by a calling to heal others, frustration consumes her since her brother, King Sathan, doesn't understand her desire to study medicine in the human world. Moreover, the son of the Dark Lord Crimeous now inhabits their compound, armed with his sharp tongue and dark nature.

Darkrip has been enthralled by Arderin since the night he knocked her unconscious and sent her down the river, prompting the end of the War of the Species. Never has he met a woman more beautiful and passionate. Frustrated by her dramatics and consumed by desire for her, he vows to stay away. For the son of Crimeous, with his malevolent blood, could never have children or a normal life.

When Crimeous threatens both their lives, forcing them into a shared captivity, they do everything possible to escape and survive. As their connection grows, so does their attraction. Together, they forge ahead in the conflict against the Dark Lord, determined to deny temptation. But the Universe is fickle and can muddle with even the best intentions...

**The Etherya's Earth fantasy romance series is best read in order although each book does have its own featured hero/heroine and HEA. Content information can be found on the author's website. 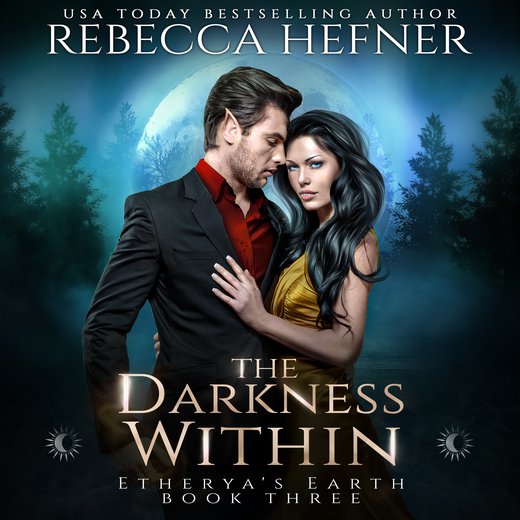 When Darkrip reached the infirmary, he found a counter with cabinets above and all the appropriate medical supplies.  Pulling out a needle and thread, he sat on the infirmary bed to start stitching.  God, the wound was ugly.  He inspected it, sewing the enflamed tissue together, hating the pleasure that shot through his body with each needle prick into his skin.  And then, he stilled…right in mid-prick…

She was here.  Her scent invaded his nostrils like an unwelcome army attacking the thick layer of protection he had built around himself.  With a growl, he lifted his head.

Arderin stood inside the entrance to the infirmary, her eyes rounded as her pink lips formed a silent ‘O.’

“Get out,” he gritted through his teeth.  He hated that his tone was so harsh, especially after their recent cordial conversation in the gym, but he detested showing vulnerability to anyone.  That he would show it to her, the woman who seemed to pervade his every thought, was humiliating.  Vowing to scare her away, he bristled, hoping she’d scamper off and leave him to drown in his self-loathing.

Her ice-blue irises lowered to the gash, where his hands were still frozen in mid-sew, and then lifted back up to his.  “You’re hurt.”  Her voice lacked the harshness he’d come to expect from her.

She took two tentative but long strides toward him, her chin held high.  “Who hurt you?”

“Arderin,” he said, squeezing his eyes shut as her smell overwhelmed him.  “I would leave now, if you know what’s good for you.”

Opening his eyes, he observed that she swallowed visibly as she closed the remaining distance between them.  “I think that’s the first time.”

“What?” he asked, his tone somewhere between exasperated and furious.

“That you called me by my name and not ‘princess’ or ‘brat.’  Now, I’m really worried.”  Her lips curved into a half-smile as she looked down at him, her expression filled with concern.  He felt scrutinized, as if he was a bug under a microscope.

“I’m not your latest science experiment.  Get out.”

Arderin grabbed the needle and thread, grazing his hands as she took them.  Fire sparked through his entire body from her brief touch.  “You can’t sew yourself if you don’t clean the wound first,” she instructed as if he were a child, not the son of the Dark Lord who could pulverize her into a million bits with one thought.

“I cleaned it earlier.  I’ve been injured thousands of times in the Deamon caves and sewn myself up just fine.  Not all of us have the luxury of playing doctor for a day.”

Pivoting, she opened the windowed cabinets above the counter, pulling out a bottle of alcohol, some gauze and some bandages.  Dragging over a tray that sat atop thin legs with wheels, she set everything on top.  Coming to stand in front of him, she gave him an irritated look.

Realizing that he was still holding his hands in front of his wound, he moved them, sitting the palms flat on the bed.  Opening the bottle of alcohol, she poured a generous amount on the white gauze.  Lifting those gorgeous eyes to his, she said, “This might hurt.”  Her perfect features were laced with extreme focus as she touched the gauze to his wound.

It did indeed hurt, but that pain sent an agonizing burst of pleasure through his veins, compounded by her scent.  Hating himself, he closed his eyes in shame.

Her short gasp indicated that she’d realized what he had so desperately wanted to hide from her.  He wasn’t sure why, but he’d wanted his sick pleasure kept from her.

“I am the son of the Dark Lord,” he muttered to her, his eyes opening to form angry slits.  “You should expect that I would feel pleasure from pain.”

She shrugged her slender shoulders and continued cleaning him.  “Guess you’re lucky.”

Darkrip scoffed.  “Yes, none are as lucky as I,” he mocked.

Arderin lifted her icy irises to him, filled with the quick flare of anger that he’d come to expect from her.  “Most people would give anything to feel pleasure where there should be pain.  Perhaps you need to change your perspective.”

“Perhaps you need to close that bratty mouth before I do it for you.”

Her nostrils flared as she stared back at him.  Inhaling a large breath, she just shook her head in disapproval and lowered her focus to his wound again.

As she cleaned him, Darkrip felt something in his chest that he refused to acknowledge.  His nostrils clung to the smell of her fruity shampoo and he had visions of pushing her head into his lap.  Fuck.

Her thin fingers were steady as she began to stitch his wound.  “How did this happen?” she asked, her ministrations never ceasing.

“I was helping your brother orient some of the new Slayer troops to the TEC.  One of them misfired into my side.”

“Yikes,” she said.  He could tell she was holding in a laugh.  “No good deed goes unpunished, huh?”

Breathing out a laugh, he shrugged.  “Guess not.”

As she opened the dressing on the table, he inspected her work.  It was flawless.  Impressed with her medical skills, he allowed her to place the long white gauze strip over his stitches.  With the thin pads of her fingers, she rubbed over the bandage, making sure it bonded with his skin.  Unable to take it, he grabbed her wrist, stilling it.

“That’s enough,” he said, pulling her wrist from his burning body.  Her touch consumed him.  “You’d be wise not to voluntarily touch me.  I think you know that.”

Her perfect features formed a scowl, and she pulled her wrist from his grasp.  “Well, you’re fucking welcome, asshole.  That’s the last time I try to help you.”  Turning, she began cleaning up the table, muttering to herself.

Knowing that he was playing with fire, he stood to his full height.  Aligning his front with her back, he brushed against her.  She stilled instantly, snapping her head so that she watched him from the corner of her eye.

“I appreciate you helping me.  I’m not trying to be a jerk.  But you know of my curse.  It drives me to want things I can’t have.”  Unable to stop himself, he pushed his erection into her lower back.  “I’ll never be able to erase the image of you clutching my cock in your hand after the battle with my father.  It felt amazing.”  Closing his eyes, he nuzzled her soft curls with his nose.  “God, I want to fuck you so badly.  Remember that next time you come near me.  I’ve exhibited extreme control around you and enjoy our little spats more than you realize, but I’m every bit the monster you think I am.”

Breathy pants exited her frozen body.  “If you’re such a monster, why are you warning me?”

Lowering his lips to her ear, he whispered, “Because you matter.  Don’t take that for more than what it is.  I don’t want to hurt you.  Be cautious.”  Chill bumps dotted the pale skin of her slender neck as she shivered.  Knowing he was so close to crossing a line from which he could never return, he closed his eyes and dematerialized back to his cabin.