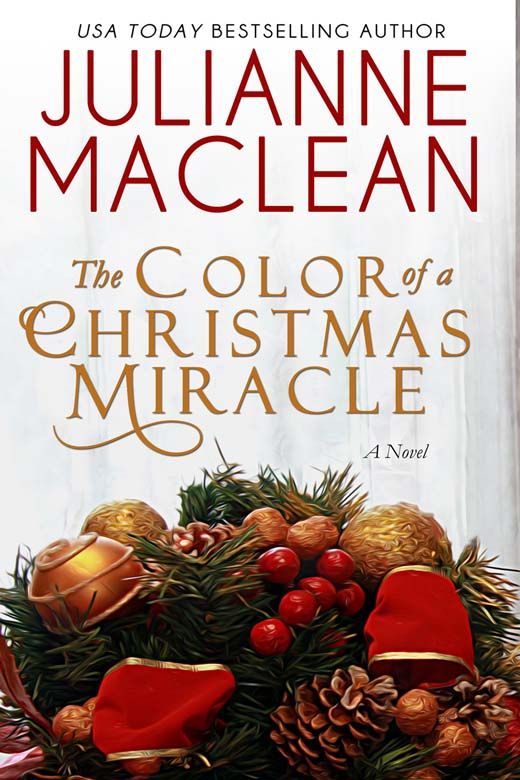 "As always, keep some tissues close by..."

From USA Today bestselling author Julianne MacLean comes a new standalone contemporary romance in the bestselling Color of Heaven Series, where people are affected by real life magic and miracles that change everything they once believed about life and love.Claire Radcliffe has been blessed with a wonderful life—a loving husband, a fulfilling career as a schoolteacher, and a perfect house in a charming historic neighborhood. But with each Christmas that passes, the one thing she longs for most of all continues to elude her, and before long, her life doesn’t seem so perfect anymore.When yet another holiday season approaches and her marriage suffers the worst possible blow, Claire must learn to have faith in destiny, and allow herself to believe that miracles can happen to anyone—especially at Christmastime.Heartwarming and inspiring, The Color of a Christmas Miracle is the tale of one woman’s journey to find happiness, and to learn the power of forgiveness and redemption on the path to true love. 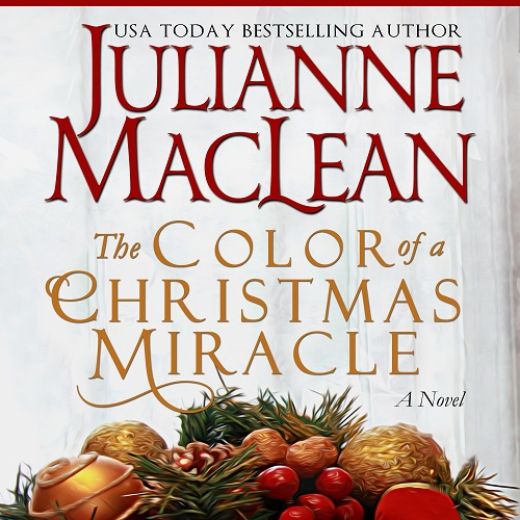 It’s Christmas Eve, nearly midnight, and I am on my knees in the snow, praying for a miracle.

To be honest, I have been praying for this miracle every day for the past few years, but never quite like this. This is different. This time, I would really love for things to work out. Not just for my own sake, but for my husband’s, because he is the kindest, most generous and compassionate soul I’ve ever known. He deserves this gift, and I would love for him to receive it.

So I could really use your help.

Let me assure you, I am not asking for a handout. I am not the type of person to feel sorry for myself or expect good things to simply fall into my lap because I prayed for them. To the contrary, I am a realist, and I’ve learned how to pick myself up and dust myself off when I get knocked down—and I’ve been knocked down quite a bit in this life. But I’ve always had faith that everything will work out in the end, exactly as it’s meant to—as long as I am willing to do my share and never lose hope.

So I will ask again….

Say a prayer for me tonight. I am a good person, and so is everyone else involved in this. I may not always have felt that way. I might have been angry and judgmental about certain people who caused me pain recently, but the situation has changed.

Although I suppose it would help if you knew what, exactly, you were praying for. Or rather, what I am praying for.

So let me rewind a bit and tell you where I am tonight, and how I came to be here.

Merry Christmas, by the way. I hope all of your dreams come true, and that this is the best Christmas ever. For all of us.

It’s rather remarkable, don’t you think, that so many of us can enter adulthood believing that most roads ahead will be straightforward, and that we will step onto a straight path in pursuit of our dreams, and everything will go according to plan.

I don’t know why in the world I embraced this idea, considering the fact that I’d been thrown some curveballs in my childhood—curveballs that resulted in heartbreak and loss. Maybe I believed that—because I’d already suffered so much disappointment in my younger years—the odds would be in my favor moving forward.

Or maybe I was able to cling to this surprising sense of optimism because my childhood hadn’t always been difficult. The early formative years had, in fact, been rather wonderful. For the first twelve years of my life, my younger sister Bev and I were fortunate enough to have been blessed with a loving family—which included two responsible parents who adored us and taught us how to be good people, how to always be considerate of others and place value on family and community. They treated us like angels, and we were as close as any family could be. Our cozy little home in a small, friendly town in rural Nova Scotia was a happy one, full of laughter and love. Bev and I never wanted for anything.

But then it all came crashing down one day when I was twelve and my father went outside to trim the hedge while Bev and I played in the sprinkler. He slipped and fell into the ditch and impaled himself on the clippers. My mother called an ambulance, but my father died before he reached the hospital. He was only thirty-six.

We were all traumatized and devastated, especially my mother who had called him her ‘knight in shining armor.’ They had been together since the eighth grade and he was the only man she had ever loved.

Suddenly, she was alone without the love of her life to help her raise her two grief-stricken daughters. That first year was full of pain, anger and tears, and over the next few years, we struggled financially. My mother—who had never worked a day in her life—took a waitressing job to support us. Sadly, it wasn’t enough to get by on and we eventually sold our cozy little home in a tree-lined neighborhood and moved to a less desirable part of town. Life was never quite the same after that.

Though my mother strove to be strong for Bev and me, I knew how broken she was on the inside. My father’s death left a gaping hole in her heart, and she was dismayed by the loss of him.

Sometimes she cried in her bedroom at night when she thought Bev and I were asleep. Whenever I heard her sorrow, I tiptoed to her room and crawled into bed with her, and held her close to comfort her. Bev would come in, too, and we would comfort each other.

I had loved my father with all my heart and soul. He taught me how to ride a bicycle, how to swim, how to build a campfire, and all the other things fathers do for their daughters—which I didn’t appreciate nearly enough when he was alive. I was simply too young to contemplate the possibility that he might be taken from me, violently and without warning.

Later, I looked back on happier times and visualized him as a magnificent shooting star, blazing across the sky before disappearing in a sudden flash.

Sometimes, it was difficult not to be overcome by my anger for having been robbed of such a wonderful man. He would never walk me down the aisle, or be the proud, smiling face in the audience, cheering and clapping as I received my high school diploma.

Whenever I wanted to lash out at God for such cruelty and unfairness, I shut my eyes and struggled to feel gratitude instead for the special years I’d had with my dad—and for the depth of his love for me. I held his love tightly inside my heart.

I never truly got over the loss of him, and that loss has affected how I have lived my life—in good ways and in bad. You will see exactly how, in the pages that follow.

After high school, I was fortunate enough to attend university with the help of academic scholarships and student loans, and I forged ahead with optimism, forcing myself to believe that everything would go my way as long as I worked hard, got good grades, and clung to my integrity on a personal level—because those were the lessons my father had taught me. He was an honorable man with a strong moral compass, and I never stopped believing that he was watching over me, urging me to be the principled young woman he had raised me to be. I didn’t want to disappoint him, so I made every effort to be the best person I could be.

I enjoyed good relationships with my professors; I maintained close friendships with the girls in my dorm (they called me their mother hen, because I was usually the one to make sure everyone got home safely from parties).

At the end of four years, I graduated with a Bachelor of Science degree with a major in mathematics. My mother was proud of me for being so “accomplished.”

Perhaps I was, on many levels, but I had never fallen in love. I’d never experienced the kind of “head over heels” passion that makes a woman throw all caution to the wind, and that caused me to worry that I was somehow deficient or incapable of intimacy with a man. Perhaps, because of the loss of my father, I possessed a classic fear of abandonment that would haunt me for the rest of my days.

At least, having excelled academically, I was able to achieve personal fulfillment through other means. I went on to earn a degree in education, graduated at the top of my class, and at the age of twenty-four, I was hired to teach math in a top-rated, private elementary school in Halifax with small class sizes. It was located in a renovated Victorian mansion in an upper-class neighborhood in the South End, not far from the entrance to the magnificent Point Pleasant Park, which boasted groomed walking trails and outdoor summer performances by Shakespeare by the Sea. Most of the children came from good families and wore smart uniforms with navy blazers and plaid kilts for the girls, grey trousers for the boys.

It was a dream come true for me to land a full-time job like that straight out of university, doing exactly what I wanted to do: teach and connect with the children. Especially those who struggled in some way personally, as I had struggled after the loss of my father.

During my first year of teaching, I was as happy as anyone could be, although there was still something missing, and I knew exactly what it was.

I wanted love. A family of my own. I didn’t want to fear the rug getting pulled out from under me, unexpectedly. I wanted to believe that I had paid enough dues when it came to loss, and the odds for happiness and success would be in my favor going forward.

I prayed that one day, I would be brave enough to open the door when love came knocking. It was almost comical that I didn’t hear the sound of the knuckles rapping when it actually happened.