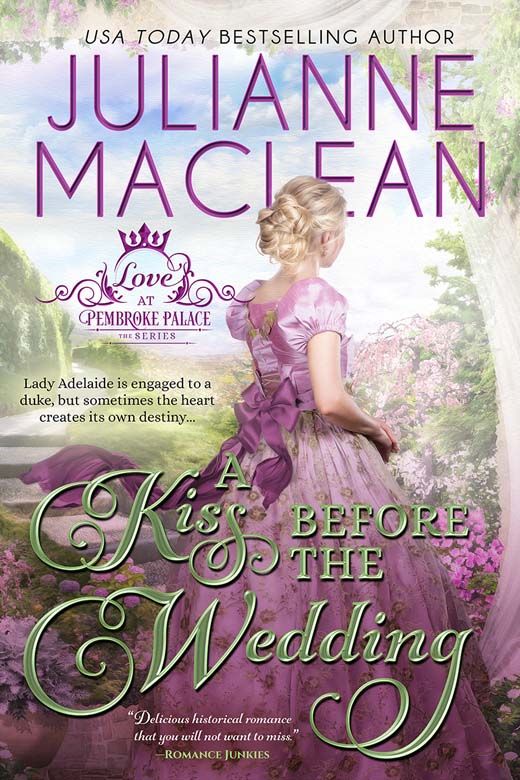 “Delicious historical romance that you will not want to miss.”

From bestselling author Julianne MacLean comes a romantic short story set in the lavish world of Pembroke Palace, where duty and desire collide.Lady Adelaide is engaged to a duke, but sometimes the heart creates its own destiny...Lady Adelaide Robins, the charming and beautiful daughter of an impoverished earl, was raised on the foggy moors of Yorkshire. Never in her wildest dreams did she imagine she would travel to London, capture the heart of a duke, and receive a proposal of marriage. Is she ready for a life of luxury and privilege as a duchess? Or will her heart forever belong to another?William Thomas, the second son of a Yorkshire viscount, is about to be disowned for his unbecoming ambitions to become a medical doctor. But what does it matter if he can have the woman he loves at his side? Determined to finally claim the hand of Lady Adelaide, his lifelong beloved, William is shocked to discover that she has accepted a marriage proposal from a duke. With the wedding only days away, will he be able to win back her heart?Note: A KISS BEFORE THE WEDDING is a romantic SHORT STORY, approximately 50 pages in length. If you are interested in reading this short story in print, it can be found as bonus content in the print edition of SEDUCED AT SUNSET, the next installment in the Pembroke Palace series. 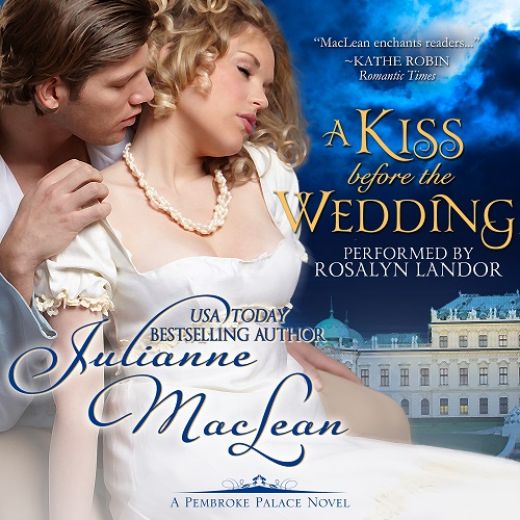 Though she was young—only one month shy of her nineteenth year—Lady Adelaide Robins possessed the wisdom to understand that certain moments in one’s life were turning points that could never be undone. This, she knew, was one of those moments. Years from now, she would look back on the choice she had made that evening as she sat at her desk, quill in hand, and wonder, what if I had acted differently? What if I had never written the letter?

Lady Adelaide did not know if she was making the right decision in picking up her pen. How could she? She did not possess a crystal ball, nor the life experience to judge most men of the world.

Except, perhaps, for one man, who was very dear to her heart.

William Thomas, her friend since childhood, was the second son of a viscount, while she was the daughter of an earl, raised on a vast estate in Yorkshire with her two older sisters, who were now married.

Their father was thankful for the husbands her sisters had procured, for it was common knowledge that their family was impoverished, and there was no money for dowries. Not a single farthing.

Nevertheless, Mary and Margarite had married well, which was no great surprise, for they were widely regarded as incomparable beauties.

Margarite had married the handsome eldest son of a baron from the south who would inherit his father’s prosperous estate one day, while Mary had wed a less handsome but exceedingly amiable youngest son of a marquess, who was a well-loved vicar in Devonshire.

Now it was Adelaide’s turn to walk down the aisle, and her father was beside himself with joy, for she had done better than both her sisters. Somehow, against all likelihood, and without intent, she had captured the heart of a duke.

Not just any duke, mind you. Adelaide was now famously engaged to Theodore Sinclair—His Grace, the Duke of Pembroke—one of the highest ranking peers in the realm, wealthy beyond any imaginings, impossibly handsome of course, and with a palace considered to be one of England’s greatest architectural achievements. It was an extravagant baroque masterpiece with splendid Italian Gardens (recently designed by the duke himself), a complex cedar maze which provided hours of entertainment for prestigious guests, and it was allegedly built upon the ruins of an ancient monastery.

Some said the complex network of subterranean passages beneath the palace was haunted by the monks, but Adelaide did not believe in ghosts. She did believe, however, in the properly documented particulars of history, and in that regard, it was a well-known fact that the first Duke of Pembroke had been a close, intimate friend of King Henry VIII, who had awarded the dukedom in the first place.

Yes, indeed. Theodore Sinclair, the current Duke of Pembroke, was the most sought-after bachelor in England, and for some unknown reason, he had taken one look at Adelaide from across a crowded ballroom and fallen head over heels in love with her.

She wasn’t sure what she had done to arouse his passions to such a heightened degree. She had danced with him twice at the ball where they met, then accepted his invitations to go walking in the park the following three days in a row, and had sat with him in his box at the theater the following week.

She could not deny her own infatuation, for the duke was very handsome and very grand. Even now she was distracted by the image of his fine muscular form, his charming smile, and the flattery of it all.

And then…he had come to her father practically begging for her hand in marriage. Her father had agreed and was now his old self again, pleased that his family circumstances would improve, as were her sisters who would also benefit from her marriage.

Which was why this letter was probably a mistake.

Adelaide set down her quill.

No…I must not write to William. It would be the equivalent of sticking a hot poker into a hornet’s nest and stirring it around.

She was engaged to Theodore now. William had been gone from Yorkshire for more than a year, and he had left without expressing any feelings for her, other than friendship. She had shed enough tears and waited too long for letters that never came. Her good sense told her she must forget him once and for all and move on with her life. Without him.

Rising hastily from the chair, she padded across her candlelit bedchamber to the fireplace. The flames danced wildly in the grate and the charred log snapped and crackled in the silence of the room.

It was nearly midnight. She should go to sleep and forget about the past. In three weeks, she would marry one of the greatest men in England and become Duchess of Pembroke. Her family would rise in the world, and she suspected there was some promise of a generous settlement that would end her father’s financial hardships.

Knowing that she must act responsibly and dutifully, she padded back to her desk, crumpled the letter that began with ‘Dear Mr. Thomas,’ and threw it into the fire. Then she snuffed out the candle and climbed into bed.

The following day, Adelaide struggled with her decision not to write to William.

How can I marry without a word to him? Surely he deserves to know. What will happen when—if—he comes home from Italy and discovers that I am a duchess and had not told him a single thing about it? He will be shocked and very hurt.

Despite the fact that William had inflicted great pain and frustration upon her lately—for he had not written a word since February—she could not bear the idea of hurting him. All her life he had been her closest friend. She could not take this step without telling him. He must hear it from her, and no one else.

That was it, then.

After dinner, she sat down at her desk and brushed the feather quill across her chin. She would write this letter and send it to him in Italy. William probably wouldn’t even receive it until after the wedding—so there would be no danger of him talking her out of it—but at least he would know she had cared enough to explain herself to him personally. And though she was angry with him for leaving her behind, she did care, more than words could say. More than she should.

Carefully dipping her quill into the rich black ink, she touched it to the page and began, at last, to write.

There is something I must tell you…