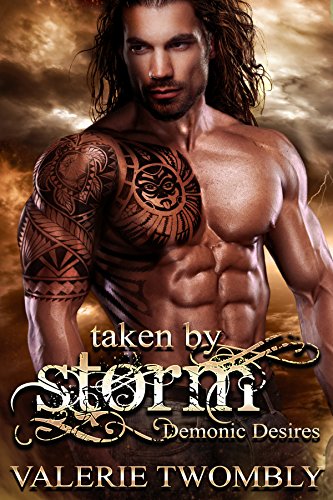 Fang's enemies made one fatal mistake. They took his mate. Knowing she is the key to unlock what he always believed was a myth, the demon leaves a path of destruction in his wake to find her.

When her best friend disappears, Bethany gets pulled into a world of demons and the fabled Atlantis. Never did she dream one night of hot passion with a sexy protector would lead to life-changing events.

She wears a mask of bravado to fool her captors. He bridges the gap between realms to save her. Together they will become the most powerful protectors of the Lost City.

Fang scanned the room, his muscles taut and every nerve on edge. His father Bliezal had been sent on an errand by the king, and Fang was commanded by Prince Greydon to have fun as it was put to him. A rather difficult thing to do when his gut screamed something was in the air. What? He couldn’t put his finger on it.

It was the youngest prince’s birthday, and the king and queen happily sipped wine at the head table, enjoying the entertainment. Yet, Fang couldn’t relax. Recently, the Oracles had announced Greydon was destined to fulfill the prophecy and kill the god Zolar. Something that needed to be done so the royal family and the people could finally be at peace. War had settled over the Valarian race since the marriage of their goddess Uuna to Zolar. Things had not ended well, and the two fought each other in a constant battle to better their armies.

Fang watched Greydon cross the room to where the queen sat. He bent and kissed his mother’s cheek, and the queen patted his arm. She loved her children, and it made Fang miss his own mother. He shoved his self-pity down and tried to follow orders. But it was difficult since he was a Daldara. A protector of the royal family and his duty was sacred.

A female’s scream sliced through the air and shattered the festivities. Shots rang out and before Fang knew what was happening, blood covered the walls and pooled across the floor. He instantly assessed the room, looking for the enemy, certain Zolar was behind the attack. But how? Safeguards had been placed all around the community.

Several more screams erupted. He caught sight of Threydor, the Concosa demon leader, aiming a pistol at the now murdered king and queen. Fang sprang into action and took out several of Threydor’s henchmen, their heads toppling to the floor and sliding across the highly polished marble, as he hacked his way to his prince’s side.

Pandemonium broke out as women fled, and men took up arms. Fang spotted Greydon with a dagger in his hand and a look of vengeance in his eyes. He was heading for Threydor. Fang flashed in front of the prince and stopped him in his tracks.

“My Prince, I am so sorry, but you must flee.” Out of the corner of his eye, Fang caught the other two princes, Zander and Orien, as well as the king’s guard fighting the enemy. Blood spilled everywhere.

“I am not leaving,” Greydon spoke through clenched teeth and turned to leave.

“But you must. You are our only hope.” Fang gripped the prince’s arms and spun him so they were face to face. He looked deep into the pain-filled eyes of the man he was sworn to protect. “Grab what you need and run my Prince. I swear I will avenge your family.”

Greydon fisted his hands. “What you ask me to do is cowardice.”

Fang shook his head. “No. What I beg you to do is save your life. You are prophesied to end this. You must stop the war and take our people back to their home, Oshivana.”

Orien appeared next to Greydon and glared at his brother. “Why the hell are you still here? Flee and don’t forget the box.” He disappeared before anyone could respond.

“Fine, I will go.” Greydon vanished and Fang prayed to Uuna it would not be the last time he saw his prince... No. With the king now dead, Greydon would have to assume the reign. Goddess help them all that there would be something left to rule over.

A pained shout caught his attention, and he whirled in time to see his father snared in a net and fighting to no avail to disengage himself. Fang pulled a second dagger from his boot and charged to free his father only to find himself caught in the same kind of netting. His power instantly drained. He scanned the room to witness his people being hauled away, the king’s guard beaten and bloody. Zander and Orien were also contained in the magical netting.

Defeat filled the air as one by one they were led away.

“I will avenge the king and queen, and I will kill the lot of you,” Fang snarled at the enemy as he was hoisted off the floor. Father, I will save our people, on that I swear.

Of that I have no doubt. The prince is smart and he will be safe, but he will need you. You are resourceful. Do what you must to free yourself–– his father’s voice cut off.

“Nothing will stop me.” He pushed at the netting. “I am Daldara, and you will regret the day you fucked with my people.”