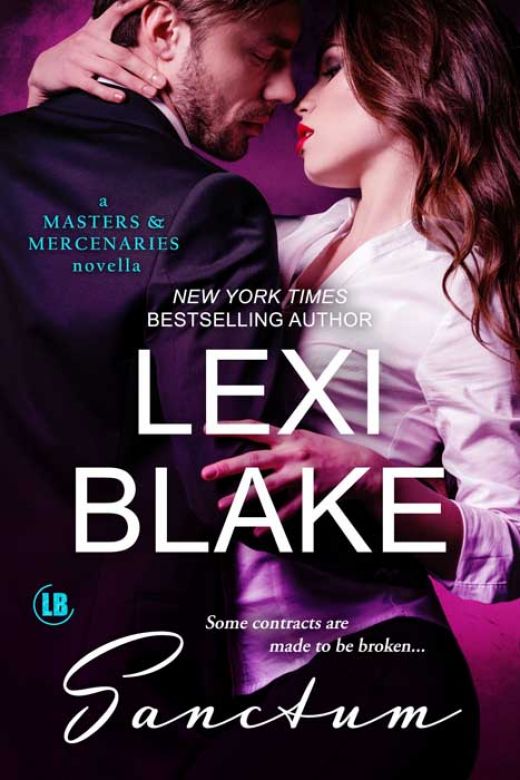 A contract broken…Ryan Church and Jill Paxon enjoyed their life as Master and submissive until the day Ryan's entire world crumbled. No longer able to fulfill his end of the contract, Ryan did what he thought was best for Jill. He let her go.An unexpected reunion…Eighteen months later, Ryan is working for Ian Taggart as the Dom in Residence at the elite BDSM club Sanctum when his former submissive walks through the door looking for a job. Jill has changed, but his desire for her is still insatiable. Jill, shattered by his past rejection, can't trust Ryan, but she needs the job. Back in the community where she once felt safe and secure, she longs for the life she lost and the man she loved.A last chance for love…Ryan is presented with an opportunity to restore his wealth and name, but it could cost him his last chance at rebuilding a life with the woman he loves. When the secrets Jill has carefully hidden from Ryan are exposed, a terrible twist of fate might take her out of his life forever.A Masters and Mercenaries Novella by Lexi Blake

“Tell me something, Ryan.”

Ryan Church looked up from the documents he was reviewing and managed to avoid the long sigh that threatened. Ian Taggart stood in his office doorway, a frown on his face. The frown wasn’t a surprise. Ryan was pretty sure the big bastard never smiled. The fact that he was standing there, requesting a talk, was new. Ian Taggart almost never talked to him unless something had gone spectacularly wrong. “What do you need, Mr. Taggart?”

Cool blue eyes rolled and Ian stalked across the office like the predatory animal he was. Ryan had worked with sharks before, but none of those Wall Street assholes ever made him wary the way Taggart did. Those businessmen might be ruthless when it came to contracts and lawsuits, but Ryan was pretty sure Taggart had more than metaphorical blood on his hands. Yet, despite the man’s intimidation factor, he was one of the most honest men Ryan had ever met. And that damn straight meant something to him.

“You know you’ve been managing this club for almost a year now. I think you can call me Ian.”

Ryan set down the account books. “All right, Ian. How can I help you?”

“So polite.” Ian stuffed his massive body into the only available chair in the office. Ryan couldn’t help but think about the fact that at one time his office would had been five times this size, with a spectacular view of downtown Dallas, and his desk had been big enough to fuck on.

A vision of Jillian, her body spread across his desk and that sunshine smile on her face, assaulted him. He’d taken her right on top of his custom-built mahogany desk one sweet summer afternoon. He’d shoved his paperwork out of the way, ordered her to spread those long legs of hers, and feasted on her pussy right there in the middle of the day with his full staff working just outside the door.

He forced the thoughts away because they were the past, and now he had a view of the back alley and a boss with a determinedly sarcastic view of the world. He waited because Ian would talk when he wanted to talk.

“I need to make a few things clear to you. You see, I thought since you’ve been in the lifestyle for so many years, that you would know how protocol in a club works.”

Fuck. What was this shit about? Ryan had been a Dom since he discovered the lifestyle at the tender age of nineteen. He and his frat buddies had visited a club to laugh at the freaks, and Ryan had only seen beauty and passion and a purity he’d looked for all his life. He’d quit the frat, found a mentor, and realized discipline was more than a word his parents used to rail at him. It was everything. He’d been a Dom for half his life, but he’d only been running a club since everything had fallen apart. “What have I gotten wrong, Mr. Tag…Ian?”

Ian’s lips twisted up in his impression of a smile. It was arrogant and had every female in Sanctum panting after the big man. “You’re the manager, but you’re also the Dom in Residence. You train the other Doms and help couples and run scenes with unattached submissives.”

He wasn’t telling Ryan anything he didn’t know. “And?”

“You can fuck the girls.” He brought his hands up and made a deeply junior-high gesture. “The penis goes into the vagina like this.”

It took everything Ryan had not to roll his eyes. The last thing he wanted was for his personal life to become club fodder. Of course, sex was on the menu at Sanctum every night. That didn’t mean he had to partake. He was on a diet. A starvation diet. “What if I don’t want to fuck the girls?”

“Okay. I went about this all wrong. I can see that now.” Ian leaned forward, a serious look on his face. “You can fuck the guys. The gay ones that is. I wouldn’t try fucking the straight ones. They get irritable. Now, I haven’t done this one, but I think it’s similar. The penis goes into the anus in this particular coupling.”

He flipped his boss the bird. “I’m not gay.”

Ian sat back, his expression softening as much as the man ever softened. “I wouldn’t care if you were. I don’t judge anyone on who they fuck as long as they’re happy about it. I’m just trying to say that if you were under the impression that you couldn’t form relationships here, you’re wrong. If you want to negotiate with the subs for sex, just get it in writing and it’s cool. If you’re dating someone on the payroll, it’s your call. I can’t exactly have a policy on that or I would have to fire half my staff and my best friend. My day business is just full of whack jobs who fuck clients or fall for people who we think might be linked to terrorists.”

Ian Taggart’s day business was security at the highest levels. McKay-Taggart Security worked for the richest corporations and, if rumors were true, the US government from time to time. Ryan had gotten to know the crew, as he liked to call them. Taggart’s crew came in on a regular basis to play. And yes, they apparently weren’t big on protocols when it came to the women they fell for.

Ryan had to smile at that one. “Yeah, Liam and Avery’s wedding was lovely.”

“Only because she turned out to not be a terrorist,” Ian pointed out. “I’m just saying. If my security guys can get away with fucking clients and potential traitors, you can ease up and get nasty with some subs. They talk about you a lot.”

Ryan was aware. He was a mystery to both his staff and the club’s submissives. How could he tell them that he couldn’t sleep with anyone because he was still in love with a woman who had been gone for almost two years? Who he’d given away?