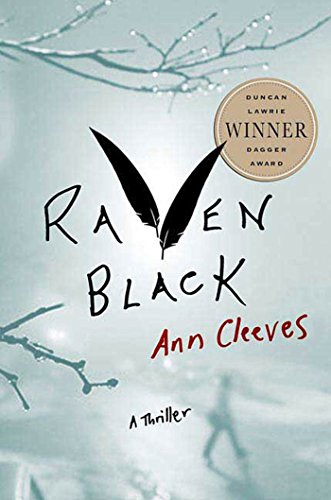 It is a cold January morning and Shetland lies buried beneath a deep layer of snow. Trudging home, Fran Hunter's eye is drawn to a vivid splash of colour on the white ground, ravens circling above. It is the strangled body of her teenage neighbour Catherine Ross. The locals on the quiet island stubbornly focus their gaze on one man – loner and simpleton Magnus Tait. But when police insist on opening out the investigation a veil of suspicion and fear is thrown over the entire community. For the first time in years, Catherine's neighbours nervously lock their doors, whilst a killer lives on in their midst.

Please log in to recommend or discuss...
Ann Cleeves

Twenty past one in the morning on New Year's Day. Magnus knew the time because of the fat clock, his mother's clock, which squatted on the shelf over the fire. In the corner the raven in the wicker cage muttered and croaked in its sleep. Magnus waited. The room was prepared for visitors, the fire banked with peat and on the table a bottle of whisky and the ginger cake he'd bought in Safeway's the last time he was in Lerwick. He could feel himself dozing but he didn't want to go to bed in case someone should call at the house. If there was a light at the window someone might come, full of laughter and drams and stories. For eight years nobody had visited to wish him happy new year, but still he waited just in case.

Outside it was completely silent. There was no sound of wind. In Shetland, when there was no wind it was shocking. People strained their ears and wondered what was missing. Earlier in the day there had been a dusting of snow, then with dusk this was covered by a sheen of frost, every crystal flashing and hard as diamond in the last of the light, and even when it got dark, in the beam from the lighthouse. The cold was another reason for Magnus staying where he was. In the bedroom the ice would be thick on the inside of the window and the sheets would feel chill and damp.

He must have slept. If he'd been awake he'd have heard them coming because there was nothing quiet in their approach. They weren't creeping up on him. He'd have heard their laughter and the stumbling, seen the wild swaying of the torch beam through the uncurtained window. He was woken by the banging on the door. He came to with a start, knowing he'd been in the middle of a nightmare, but not sure of the details.

‘Come in,' he shouted. ‘Come in, come in.' He struggled to his feet, stiff and aching. They must already be in the storm porch. He heard the hiss of their whispers.

The door was pushed open, letting in a blast of freezing air and two young girls, who were as gaudy and brightly coloured as exotic birds. He saw they were drunk. They stood, propping each other up. They weren't dressed for the weather yet their cheeks were flushed and he could feel the health of them like heat. One was fair and one was dark. The fair one was the prettier, round and soft, but Magnus noticed the dark one first; her black hair was streaked with luminescent blue. More than anything, he would have liked to reach out and touch the hair, but he knew better than to do that. It would only scare them away.

‘Come in,' he said again although they were already in the room. He thought he must sound like a foolish old man, repeating the same words, making no sense at all. People had always laughed at him. They called him slow and perhaps they were right. He felt a smile crawl across his face and heard his mother's words in his head. Will you wipe that stupid grin from your face. Do you want folk to think you're dafter than you really are?

The girls giggled and stepped further into the room. He shut the doors behind them, the outside door which had warped with the weather and led into the porch, and the one into the house. He wanted to keep out the cold and he was frightened that they might escape. He couldn't believe that such beautiful creatures had turned up on his doorstep.

‘Sit down,' he said. There was only the one easy chair, but two others, which his uncle had made from driftwood, stood by the table and he pulled these out. ‘You'll take a drink with me to see in the new year.'

They giggled again and fluttered and landed on the chairs. They wore tinsel in their hair and their clothes were of fur and velvet and silk. The fair one had ankle boots of leather so shiny that it looked like wet tar, with silver buckles and little chains. The heels were high and the toes were pointed. Magnus had never seen footwear like it and for a moment he couldn't take his eyes off them. The dark girl's shoes were red. He stood at the head of the table.

‘I don't know you, do I?' he said, though looking at them more closely he knew he'd seen them passing the house. He took care to speak slowly so they would understand him. Sometimes he slurred his speech. The words sounded strange to him, like the raven's croaking. He'd taught the raven to speak a few words. Some weeks, he had nobody else to talk to. He launched into another sentence. ‘Where are you from?'

‘We've been in Lerwick.' The chairs were low and the blond girl had to tip back her head to look up at him. He could see her tongue and her pink throat. Her short silk top had become separated from the waist band of her skirt and he saw a fold of flesh, as silky as the material of her blouse and her belly button. ‘Partying for hogmannay. We got a lift to the end of the road. We were on our way home when we saw your light.'

‘Shall we have a drink, then?' he said eagerly. ‘Shall we?' He shot a look at the dark girl, who was staring at the room, moving her eyes slowly, taking it all in, but again it was the fair one who replied.

‘We've brought our own,' she said. She pulled a bottle from the woven shoulder bag she'd been clutching on her knee. It had a cork jammed in the top and was three quarters full. He thought it would be white wine, but he didn't really know. He'd never tasted wine. She pulled the cork from the bottle with sharp, white teeth. The action shocked him. When he realised what she intended doing he wanted to shout to her to stop. He imagined the teeth snapped off at the roots. He should have offered to open it for her. That would have been the gentlemanly thing to do. Instead, he only watched, fascinated. The girl drank from the bottle, wiped the lip with her hand, then passed it on to her friend. He reached out for his whisky. His hands were shaking and he spilled a couple of drops onto the oilcloth when he poured himself a glass. He held out his glass and the dark girl clinked the wine bottle against it. Her eyes were narrow. The lids were painted blue and grey and were lined with black.

‘I'm Sally,' the blond girl said. She didn't have the dark one's capacity for silence. She'd be one for noise, he decided. Chatter and music. ‘Sally Henry.'

‘Henry,' he repeated. The name was familiar, though he couldn't quite place it. He was out of touch. His thoughts had never been sharp, but now thinking took an effort. It was like seeing through a thick sea fog. He could make out shapes and vague ideas but focus was difficult. ‘Where do you live?'

‘Your mother's the school teacher.'

Now he could place her. The mother was a little woman. She'd come from one of the northern isles. Unst. Yell, maybe. Married a man from Bressay who worked for the council. Magnus had seen him driving around in a big 4x4.

‘Aye,' she said and sighed.

‘I'm Catherine Ross,' she said, speaking for the first time. Her voice was deep for a young lassie, he thought. Deep and smooth. A voice like black treacle. He forgot where he was for a moment, picturing his mother spooning treacle into the mixture for the ginger cakes she'd made, twisting the spoon over the pot to catch the last sticky threads, then handing it to him to lick. He ran his tongue over his lips, became embarrassingly aware of Catherine staring at him. She had a way of not blinking.

‘You're not local.' He could tell by the accent. ‘English?'

‘You're friends?' The idea of friendship was a novelty. Had he ever had friends? He took time to think about it ‘You're pals. Is that right?'

‘Of course we are,' Sally said. ‘Best friends.' And they started laughing again, passing the bottle backwards and forwards, throwing back their heads to drink, so their necks looked white as chalk in the light of the naked bulb hanging over the table.