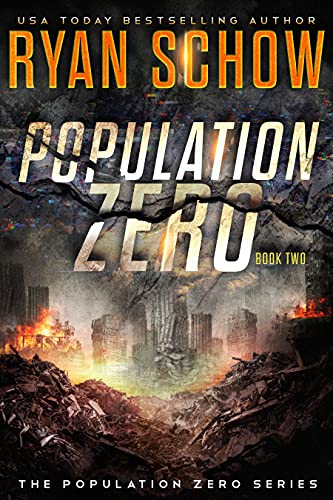 Hot on the heels of the bestselling first book in this series comes the nail-biting second installment! Early readers are calling Population Zero: Book 2 “Mind-blowing!” and “Exactly what I hoped for from of a sequel!”

If you thought Population Zero: Book 1 was an exhilarating, edge-of-your-seat thrill ride, brace yourself for a blistering round two.  Slater and the gang are back with a vengeance!

A stolen police cruiser with a trunk full of weapons…

….A missing woman in the middle of a war zone…

What could possibly go wrong?

How far would you go to honor your family? What would you risk to give them the ending they deserve? And who must you become to survive the nightmare that is now America’s darkest hour?

While Slater and Scout charge headlong into the apocalypse in search of a missing woman, Gabriella and the gang realize that a nasty skirmish is about to become an all-out war.

Deeper in San Francisco, Johan and Lilitu are faced with a challenge that puts them on a crash course with one of their victim’s kids.

At the center of all of this chaos is the devious, unpredictable quantum computing program, Population Zero.  The agenda has never been more clear, for the line in the sand has been drawn and crossed.  Can our survivors save themselves, let alone the future of mankind?

Buckle your seatbelts, charge your kindle, then get ready for a high-octane, post-apocalyptic adventure like no other…

As with all of Ryan’s books, things seldom go according to plan, feelings get hurt with blades and bullets, tons of action ensues, and tears are likely to be spilled. Not to worry, though, nothing smooths over a spicy apocalyptic thriller like a few well-timed laughs.  #Errol #Goliath'sNuts

If you think you have this story figured out, trust me, you don’t.  Get ready for the twist…

BOOKS IN THE POPULATION ZERO TRILOGY: