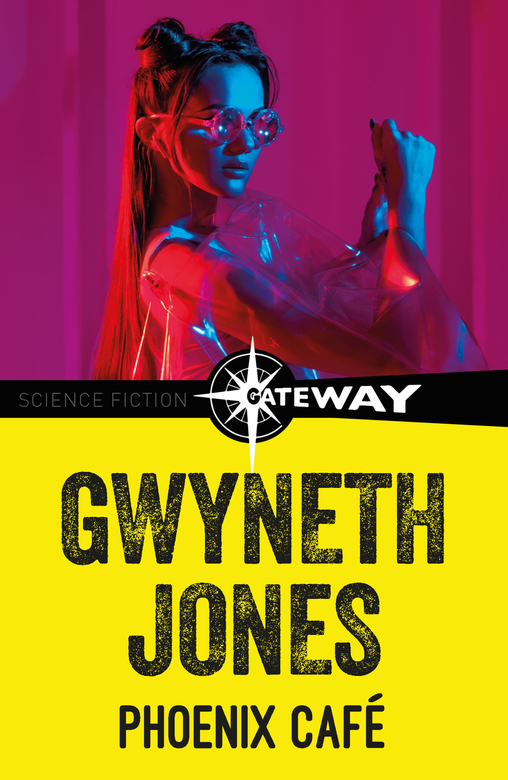 After two hundred years colonising earth, the Aleutians prepare to return to space, leaving behind humanity and an earth that have been shaped by their presence, their care, and their cruelty. In the dying days of Aleutian rule, Catherine has altered her body to appear more alien, and soaks herself in the decadence of their culture. Misha idolises the Aleutians, and begins a love affair with Catherine, both desperate to forget their humanity and embrace the alien. What will be left for the humans when the Aleutians leave? What will the Aleutians take with them from their time on earth? Could humanity have changed them as much as they changed it? Dark, violent, political and emotional, PHOENIX CAFÉ is the third book in Gwyneth Jones' critically acclaimed Aleutians Trilogy.

Far in the blurred distance, a jet of red tumbled from the fountain of life. As she became puzzled that the blood should still be liquid after so long she began to wake. The surface under her, a mixture of tackiness and unpleasant slither, struck cold as she moved. Drops of scarlet were gathering like raindrops on her fingertips now, and running off into the air. She was kneeling, arms outstretched, staring at the blood.

She woke: lying on a bed-with-legs, on a hygienically wrapped mattress, in her police cell. The wrapping, meant to swallow all her body’s minor effluent, had become fully charged several prisoners ago; it ate nothing now. Her blanket was shoved down onto the floor in the narrow space between the end of the bed and the wall. The cell was always chilly, but she’d decided she would rather get used to the cold than endure its slimy touch.

She had been working for the Aleutian Mission when she was arrested, helping converts to die their first death. The missionaries of the Church of Self, converts to the religion of the aliens, taught that human beings were no different flesh. Just like their immortal Aleutian rulers, humans were, each of them, eternal aspects of God, the WorldSelf: reborn time and again through lives without end. If only they would throw off the superstition of permanent death they would realise the glorious truth. In this city of Youro, the most resistant to Aleutian influence, the Mission had a small but enthusiastic following among the poor, and an uneasy tolerance from the rich. A steady stream of proselytes reached the moment when they felt compelled to reject their old ways in an ecstatic act of faith. Catherine had been assisting at a conversion ceremony that had run into trouble with the human authorities.

The arrest was illegal, she’d been committing no crime, but she’d been glad of the confrontation. The Mission needed publicity.

She’d been in the apartment’s dry-shower stall with the rich boy when the orthodoxy raiders arrived. The two of them had written on the wall, in huge dripping letters, in English: DONE BECAUSE WE ARE TOO MANY. He was fluent in several human languages, and a student of English literature. Many young people in the hives were like that: they had nothing to do, and the free grid was full of knowledge. Such a nice boy—rich only by comparison with the rest of the congregation, old-fashioned, gentle and serious. She would have liked to hold him back from salvation a little longer. But he knew what he wanted. He had been very earnest about it, eager and composed while the others were running wild. Then the orthodox humans had arrived. She remembered fire, confusion, a roar of foul energy rushing through the warm smell of blood. Someone, probably the building, must have called the police.

She took stock, once again, of her simple home.

The walls were covered in rows of glossy ceramic squares: light blue and white, alternately. Every third square was decorated with a bunch of dim pink roses tied in a ribbon. Catherine had counted the roses, and their leaves. She knew the gradation of wear and tear whereby the flowers near the ceiling were still clearly coloured, while those at human shoulder and hip height were almost obliterated. The floor was not tiled, but its bare grey concrete was perfectly in period. In one corner stood the covered waste bucket. Beside it, a powdered water washing unit and a smooth niche—a recent intrusion in the ancient wall covering—that held a drinking-water button. No other furniture. In the wall opposite her bed stood her front door: a handsome elderly slab of metal, ornately hinged, riveted and hatched.

Who would have guessed that a bleakly modern poor-ward police station had such hidden depths?

What would she do today? Count the tiles again. Think. Dream. Make up poetry. She might ask for art materials, but she wasn’t sure about that. She mustn’t be too comfortable. She sat up, swung her legs over the edge of the bed (it was made of tubular metal) and went over to breakfast at the water niche. She must drink. She gulped—the supply was generous—until her stomach rebelled. Her hands and arms were still streaked with dried blood, so were her clothes. She was refusing to wash because the blood was evidence. She leaned her forehead against the wall. This was by no means the first time in her lives that Catherine had embarked on a hunger strike in a prison cell, but she didn’t know how much a human body could take. Today, the fifth day, she felt weak. The inert slab of door opened, without warning.

“Come with me Miss,” sighed the policeman.

In the front office there was no one about but the duty sergeant. Obviously the place had been cleared of traffic. Catherine looked up and saw that the regulation camera light was dark.

“What’s going on?” She tugged her arm free from the gendarme’s kindly grip. “If you are at last going to charge me, I insist on it being on the record. I want a camera here.” Her head suddenly began to ache. She leaned on the desk, trying to make it look like an insolent gesture, and noticed the blood under her fingernails, a band of rust across the top of each nailbed. This was a pitiful sort of livespace, yet some obscure news agency might use her, and others might pick up on it. She imagined herself reproduced: a barefoot young woman with her long dark curly hair in a mess—unmistakably a young woman, the stained and dishevelled sexless clothes of the underclass shaped by her breasts, buttocks, waist. Would that be interesting material, in the machines’ reckoning? Interesting enough to be selected? The hallowed female flesh of the rich, exposed in public? She hoped so. The blood might help.

“There’ll be no charges. We’re sending you home.”

“No—? But that’s ridiculous! What about multiple murder?” She bit her lip. Nothing as ridiculous as a dissident begging to be locked up. She attempted sarcasm. “I didn’t know the Church of Self Mission had such powerful immunity. Can we make this official?”

“There’s a cab outside. We’ve called your guardian, so he knows you’re coming.”

Catherine recoiled. “Maitri? You shouldn’t have done that. I’m an adult.”

The sergeant, who had been pretending to study the flat screen in his desk top, finally consented to meet her eyes. They were old acquaintances. All the police of this ward knew her, the young lady brought up by the aliens, who worked among the poorest of the poor. She heard in her mind the words he refused to speak. Oh Miss Catherine why? How can you help those poor people and get them to trust you, knowing you’re going to set them hacking each other to pieces? Do you know what it’s like for my men, having to clear up after one of your “conversion ceremonies”? It’s filthy work. You’re not one of them Mission people. How can you do it?

“I am ‘one of them’,” she said, as if he had spoken aloud. She summoned her resources. The light was out, but they couldn’t really stop the monitoring inside a police station, could they? Surely that was impossible. She must not miss this opportunity to serve the cause. “The conversion ceremony is neither murder nor suicide. It is a valid act of faith. If you people believe I’m doing wrong, then charge me, so I can make my case in public, as is my legal right.”

He didn’t answer. There was a sour smell, it seemed to be coming from Catherine’s clothes. It had a colour: dinge grey, like the ashes of burnt rubbish. It was the smell of the hives … The sergeant ought to hate her: Catherine’s people had stolen a world. Stolen it, played with it, broken it, thrown it on the dump—the waste heap where this city’s poor endured their hopeless lives. She lurched against the desk, longing for his violence, the consolation so long refused: punish me!

“D’you want breakfast before you go?” he asked. She can’t help it, he was telling himself, silently. Poor kid, it’s true. She’s quite insane.

“No.” She made a last effort. “What about my rights? If I’m not to be charged, what about the orthodoxers? Get it straight. Either you charge me with murder, or assisting group suicide—which is not much of a felony. Or you admit that my converts and I were attacked in the peaceful expression of our difference. It was unprovoked gender violence. I want to make a complaint.”

The other officer took her arm. She shook him off and walked away, with what dignity she could muster. Her head was spinning.

Out in the lobby there was still no one about—except for a ragged down-and-out hunched on the floor, who was passively resisting the efforts of a gendarme trying to move him on. The officer who’d brought Catherine up from the cells came out of the doorway after her, and was summoned to help. She heard a scuffle begin, decided it wasn’t her business and then, reluctantly, turned back. They’d given up and were standing irresolute, unwilling to use more force. They were not cruel people.

They looked at Catherine hopefully, a different relation restored. She’d often helped them with their difficult customers. She’d been brought up by the aliens, who were supposed to be telepathic. The police knew, because Catherine had told them, that she read subvocals and body language: she did not read minds. Yet she could often understand and make herself understood when all other approaches failed.

“It’s your uniforms,” she said. “I’d guess he’s just been discharged from a hospital or a work camp. Your uniforms mean security, they are comforting, that’s why he’s here.”

“Can you get her to tell you her name, Miss?”

That was strange. The poor were neuter to any casual appraisal. And why did they need a name? But she had learned to be patient with the bureaucracy of human kindness.

“I doubt it. But I’ll try.” She crouched on her heels.