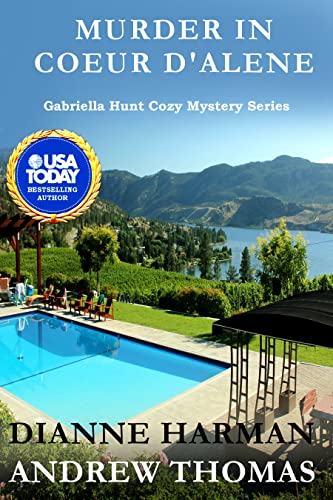 A widow.
A failed hotel.
A murder in the cellar.

When Ella Hunt’s husband dies in a mysterious diving accident in Belize, she decides to buy a small hotel in Coeur d’Alene, Idaho to help her get through her grief. Ella’s a specialist in designing and upgrading hotel properties and has traveled the world with her business.

The once prosperous hotel she bought had fallen on hard financial times and is closed. It’s difficult for a single woman, or really anyone, to turn a distressed hotel around and restore it back to its former popularity, but Ella’s determined to make that happen.

And then there’s the problem of the former hotel owner having been found murdered in the hotel cellar. Ella never expected to have to deal with a murder, but when one of the hotel employees hints that the killer could be one of the hotel staff members, she decides she better investigate the murder in order to clear the name and reputation of her newly acquired hotel.

Ella teams up with the lead police detective assigned to the case, Luke Falconer, and they receive some help from the main man in Ella’s life, Boris the Bulldog.

This is the debut book in the Ella Hunt Cozy Mystery Series and is bound to be a bestseller. Enjoy!
Read more