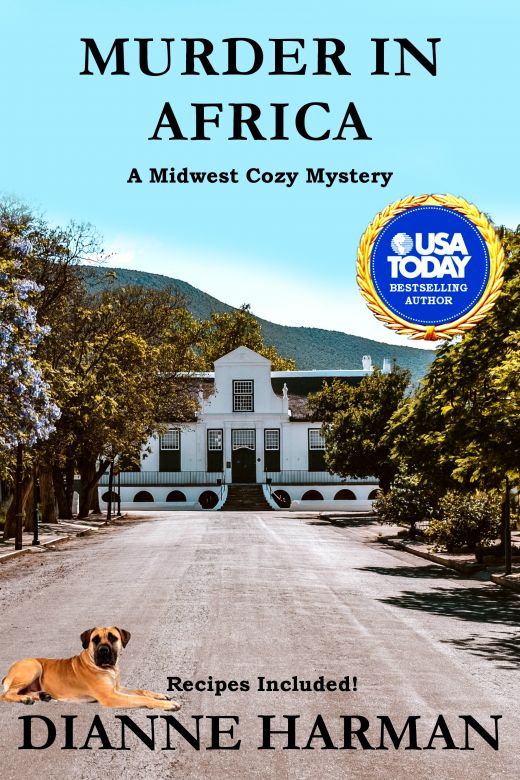 When Kat Denham decided it was to time to become a licensed private investigator, in addition to her successful career as an author, she never expected her first case to take her to South Africa to investigate the murder of a member of a U.S. Trade Commission.

Talk about trial by fire! Not only does she have to navigate language and living condition barriers, she has to walk a very fine line not to upstage the investigation by the local Cape Town police officials.

Ladies of the night, gamblers, old feuds, and jealousy make for a lot of suspects, but finding which one did it is the problem. It’s a good thing people like to talk to Kat. It sure makes solving murders a lot easier. And it might just make for a good book for one of her steamy romance novels that she writes under the pen name of Sexy Cissy!

Join Kat and her family as they look for the murderer and discover the beauty and allure of South Africa. Who knew elephants would let you pet them?

This is the 12th book in the Midwest Cozy Mystery Series by a USA Today Bestselling Author.
Read more


The U.S. diplomat got into the private chauffeur-driven SUV, smiled at the driver and said, “Please take us to our hotel.” This evening’s dinner with the British and the South African team of trade diplomats and delegates had been a success in his eyes. The British and the Americans would agree on an initiative to jointly promote more private business investments in South Africa, while the host country would ensure that bureaucratic red tape and interference was kept to a minimum for investors, and tax breaks and other helpful measures would be maximized. Definitely a win-win situation.

So Ronald Jackson, chief trade diplomat in charge of the American team that was currently visiting South Africa, was happy. Sitting next to him in the car as they drove through the dark Cape Town streets heading for the hotel was his personal assistant, Julie Emerson, a very capable expert in all things South African. She was a New Yorker who was now based in Washington, but she traveled extensively around the globe promoting American trade interests.
Ronald had chosen Julie to accompany him on this three-month long trip to South Africa because of her familiarity with the country, plus she knew how to get the best out of the people she worked with. She wasn’t a pushover, but she wasn’t a fool, either. She could sweet talk the best of them, but she wouldn’t take anybody’s nonsense.

Then there was the fact that Julie was stunningly beautiful, and that certainly didn’t hurt. She was one of those dark-haired beauties with deep brown eyes and a sultry presence, and she’d certainly made the long flight over from the States a lot more bearable. Ronald was recently divorced and the father of a twelve-year-old daughter, and as far as he knew, Julie Emerson was not currently seeing anybody. But Ronald knew better than to try and hit on her. Because even though he loved a challenge, he also didn’t think she was the type of woman to become weak-kneed over her boss, no matter how influential he was.

Plus, he didn’t want awkward vibes to hang around for the rest of the trip. He’d decided it was far better to have Julie as an ally that kept him focused and aware of what was happening around him. Spotting insincere diplomats, conmen, and manipulators was her strength, and he knew he needed that here in South Africa.

After a short drive from one side of the city center (the South Africans called it the Central Business District or CBD) to the other, Ronald’s SUV pulled over to the curb across the street from their hotel and parked. They were staying at the five-star hotel that the U.S. trade team had been booked in for the duration of the trade mission. The entire team had pretty much taken over one of the middle floors of the hotel that was known for catering to their guests’ needs, no matter what they were.

“You did good work tonight, Julie. Thank you,” Ronald said.

“But you do it so well,” Ronald said with a grin, unable to resist using a slightly flirtatious tone. “Those business leaders were lapping up every word you said. Tomorrow’s meetings should make signing a formal deal quite a bit easier.”

“Maybe, but I’m still a bit dubious about the British motives for getting involved with this initiative. I’ll see what I can find out in the morning.”

“I’m ready. I have a few emails to send, and then I’m going straight to bed,” Julie said.

When he got out of the SUV, Ronald said goodnight to his driver and confirmed a time for being picked up at the hotel in the morning. He waited for Julie to join him and made a decision that he should have a couple of brandies before going up to his hotel room.

He’d grown very fond of South African brandy, which he found to be just as good as his favorite brand back home in the States. And now that he was single again, and Julie Emerson was looking like a no-go area, it wouldn’t hurt to see if he could find an attractive proposition to enjoy some downtime with this evening.

A lot of things were polar opposites in the southern hemisphere, meaning that it was summertime in January and the night time air was hot. Being on the southern edges of Africa meant that a gentle southeasterly wind was blowing, which took the edge off the nocturnal heat. The locals called this wind, which was unique to the region, the Cape Doctor. The wind blew down through the city from the mountains and blew all the dust and urban pollution in the city out over the Atlantic Ocean, leaving behind clear, blue skies to enjoy. Legend has it that any recent problems in the city, or of its residents, got swept away when the Cape Doctor blew.

Ronald had never been to South Africa before, but he found the country fascinating. He looked up at Table Mountain just before he and Julie started to cross the road to get to the hotel. Table Mountain was a landmark in this colonial city, which was known as the Mother City. He’d first seen the flat-topped mountain a few days ago, and had taken several photographs of it with his cell phone. It was something by which he could remember this particular trip in the future.

The hotel was still lit up and very much alive with action, with visitors leaving and entering, despite it being late. Ronald was glad to see all of the activity, because he’d worked hard today negotiating with the British and the South Africans, and he was looking forward to an hour of unwinding in the hotel bar. Progress was beginning to be made, which meant that this trip shouldn’t be the stressful nightmare that previous trips to other complicated countries had been for him and his team. He was definitely ready for some down time.

Ronald and Julie spotted a gap in the stream of headlights flowing past them in both directions. When it was finally safe to cross the street, they did, and began the short walk to the hotel entrance.

“I wasn’t sure whether or not we’d ever be able to get across that street,” Ronald commented.

“I know what you mean. Traffic can be a bit… umm… daunting if you aren’t used to how people drive here,” Julie added.

“That was very diplomatically put, Julie. I can see why you always get what you want during these trade discussions,” Ronald said.

They were on the sidewalk walking up to the hotel when they saw a beggar sitting on a bench they were about to pass. Working in Washington, both Ronald and Julie were used to the sight of homeless people asking for spare change, but being used to it didn’t make it any easier to confront, and Ronald lowered his head to avoid having to look directly into this person’s eyes.

“Excuse me, sir, but do you have any spare change? I haven’t eaten for two days,” the man said.

Ronald stopped and rummaged through his jacket pockets for his wallet to see if he had any notes in it. The rand was not the strongest currency in the world, and ten rands would be far less insulting than a handful of change.

He found a ten rand note and gave it to the man, smiled, and started to walk off again with Julie. Then the homeless man said, “That was nice of you, Ronald. I thought you would just ignore me and mumble something about having no money tonight. Most admirable. Although that doesn’t change what has to happen next.”

Ronald was flabbergasted. “Who on earth are you? And how do you know who I am?”

“None of that matters, anymore. Only that you have been a very bad man, and now you have to pay.”

“Listen, I don’t know who you are, but I work for the American Embassy, and I…”

“Ronald, run!” Julie screamed, but it was too late.

Three gunshots rang out as all three rounds fired from the revolver in the man’s hand found their target. Ronald was knocked to the ground by the impact of the bullets hitting his chest.

He died moments later, sprawled on the sidewalk, Julie cradling his head in her lap.