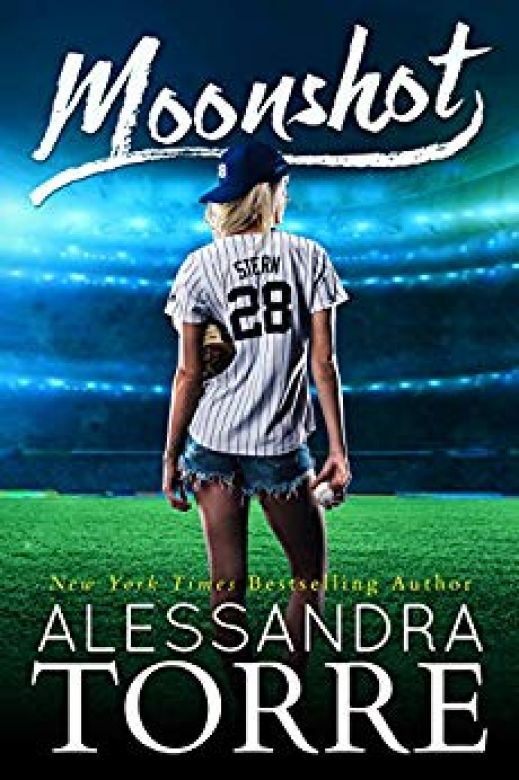 "Torre always...ALWAYS gives us the best reads, but there was something about MOONSHOT that shot above the rest. Intense, heartbreaking, insanely SEXY and uber ANGSTY."

Baseball shouldn't be a game of life and death...

The summer that Chase Stern entered my life, I was seventeen. The daughter of a legend, the Yankees were my family, their stadium my home, their dugout my workplace. My focus was on the game. Chase...he started out a distraction. A distraction with sex appeal poured into every inch of his six foot frame. A distraction who played like a God yet partied like a Devil.

"Torre always...ALWAYS gives us the best reads, but there was something about MOONSHOT that shot above the rest. Intense, heartbreaking, insanely SEXY and uber ANGSTY. ★★★★★" Shayna Renee's Spicy Reads"Without a doubt one of my most FAV reads by this author. Each word was intense and painful! This story was more than addicting, it was down right compelling and unbelievable. Rife with feels that hurt so good, I can't recommend it enough! ★★★★★" Angie & Jessica's Dreamy Reads (Angie)"AMAZING!!!! I honestly would give this book more stars if I could!!! This book was PHENOMENAL and one of my absolute favorites of 2016.★★★★★!" Book Bitches Blog

When my foot first stepped up, high and hesitantly, onto a team bus, I was seven. I liked My Little Ponies and Hanson. A brand-new coloring book was tucked under my skinny arm, a Lisa Frank backpack high on my back, full of my Most Important Items.

He stood at the top of the steps, one hand on the rail, the other on his hip. His jeans were stiff and dark, the bright yellow T-shirt tucked into the top of them. I raised my eyes from the neck of the shirt, past his scruffy jaw, his mouth, and landed on eyes that I had rarely seen.

“Hi Tyler.” His mouth lifted in a smile, and I tried to match the gesture.

His smile broke a little, his mouth tightening, and he took the steps between us quickly, awkwardly sticking out a hand. “Let me take your backpack,” he said, his voice gruff.

I moved obedient arms through the straps, and carefully lifted one pink plastic shoe up another dirty step, then a second, depending heavily on his hand, my small palm gripping it tightly, our progression up the short flight an awkward dance of strangers.

When I got to the top, I stopped, a long aisle stretching before me, a chorus of male faces, strangers’ faces, staring at me, an uncomfortable hush settling over the big bus.

“Go ahead, Tyler. Find us a seat.” My father pushed gently on my back, and I took my first step down that aisle.

“At the start of that season, the curse of Chase Stern was nothing—none of it had even begun. And back then, there wasn’t a person on that team who knew what they were getting into. Back then, there was nobody dying. It was just another season starting, another year of baseball.”

I hung on the edge of the fence, my cleats digging into the wood, my eyes glued to the field, on Danny Kiloti’s face, an ump who should, given that last call, hang up his whistle.

He ignored me, his hand on Hank’s shoulder, their own discussion of sorts unfolding on home plate. I glanced at my dad, who leaned right and spat, his shoe stubbing at the pitcher’s mound.

We were down by three, top of the ninth. Fucked, in nice lady terms. Especially with the bats we were swinging tonight. I rested my chin on the ledge, closing my eyes briefly, sucking in the sounds, the atmosphere … even on a losing night, it was magic. Especially here, in Yankee Stadium. The greatest place in the world. It wasn’t the old stadium, didn’t have the history of the greats, but it was still incredible. Even more so, in ways. Our life, inside the dugout, had certainly improved in the new digs.

But on this April night, ten games into the season, a cool breeze blowing, the scent of grass and dirt competing with peanuts and beer, music thumping in tune with the stomp of fans, and the entire stadium on its feet, defending our play … there was nothing like it. Especially not from this spot—eye-level with the field, the shift of the world’s finest players behind me, the greatest stage in the nation before me. I opened my eyes and found Dad’s on me. He winked, and I smiled. Rubbed underneath my nose, and he did the same. Our sign, solemnly decided upon one night, a decade ago. To a seven-year-old girl, it had meant everything. To me, now, it was just another piece of our connection, one strand of a thousand.

I didn’t turn my head, Franklin’s voice coming from the bench. “What?”

“On it.” I pushed away from the rail, my eyes on the mound, the game back in play, my dad winding up. I turned, knowing before I even heard the smack, that it was a strike. Two-seam fastball, and there wasn’t a better executioner in the game.

I left the stage and pushed through the swinging door, my sneakers slapping against the floor, my fingers trailing along the wall until I picked up enough speed and jogged, my fists swinging at my side, my chin nodding to a manager who passed, the entrance to the locker room ahead. I pushed through the door without hesitation, bee-lining for Franklin’s locker, my hands quick as I reached into his bin and found his inhaler.

Someone always needed something. In the game that must go on, the players’ minor needs are often crucial to our success. I heard the cheer of the crowd and quickened my return, my push on the dugout door in tandem with my toss of the inhaler, caught easily by the man.

“Struck out. Ramirez is up,” Franklin updated without my asking, my glance at the scoreboard confirming. The opponent’s first base coach looked my way and smirked, his eyes skating down my front. I smiled, giving him a front-row view of my middle finger, the crack of a bat distracting us both, and I watched the ball soar high and left—a foul.

I stared at Dad and willed another out to happen. One out, then we just needed the big man upstairs to hand out a four-run miracle.